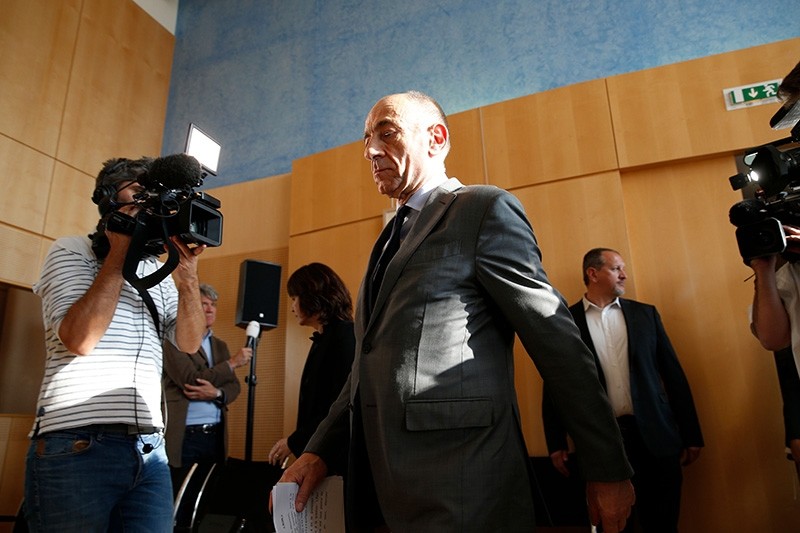 Chief executive of Air France-KLM Jean-Marc Janaillac leaves after a press conference as he announced he resigned after employees rejected the company's latest offer on wages following weeks of strikes, on May 4, 2018. (AFP Photo)
by May 07, 2018 12:00 am

Air France shares went into a tailspin on the Paris stock exchange Monday after the strike-hit company's CEO resigned and the government seemed to worry about the carrier's very chances of survival. Air France-KLM boss Jean-Marc Janaillac announced his resignation Friday after staff at the carrier's French operations rejected a pay deal aimed at ending months of walkouts. Late Monday morning, Paris business Air France stock was down 12 percent at 7.13 euros, having earlier traded as low as 6.93.

Societe Generale analysts said the company's employees "have not only forced the group CEO to resign, but also made the investment case obsolete."

Switching to a "sell" recommendation from a previous "buy," Societe Generale said the staff vote "not only puts the cost efficiency targets at risk in our view, but even the integrity of the group." Janaillac, who had been in the post for under two years and staked his future at the company on staff accepting the deal, deplored their decision as a "huge waste."

Staff and management at the carrier have been locked in a dispute over pay since February.

Intermittent strikes in recent weeks have prompted the cancellation of a quarter of flights on average.

Unionized staff are set to walk out for the 14th day on Monday as they press for a 5.1-percent salary increase this year as the company recovers from years of losses and restructuring.

"Air France-KLM is now without a boss and will find it hugely difficult to attract a high-level manager," analysts at French brokerage Aurel-BGC said. France's economy minister on Sunday warned that the survival of Air France was now in the balance.

"I call on everyone to be responsible: crew, ground staff, and pilots who are asking for unjustified pay hikes," Economy Minister Bruno Le Maire told the BFM news channel. "Be responsible. The survival of Air France is in the balance," he added.

He warned that the state, which owns 14.3 percent of the group, would not serve as a backstop.

"Air France will disappear if it does not make the necessary efforts to be competitive," he warned.

The announcement of Janaillac's departure came as Air France-KLM released its first-quarter earnings, which showed a net loss of 269 million euros ($322 million), weighed down by three days of strikes that cost about 25 million euros per day according to the company.

The group warned the dispute would shave at least 300 million euros off its operating profit for the full year, pulling earnings "notably below" last year's 1.9 billion euros.

Societe Generale analysts warned the weaker earnings performance could lead to a rift between Air France and its profitable Dutch partner, KLM.

"KLM might (rightfully) ask why the profits are being generated in the Netherlands but the losses being made in France," they said.

"The situation is neither healthy nor sustainable, in our view," they said.