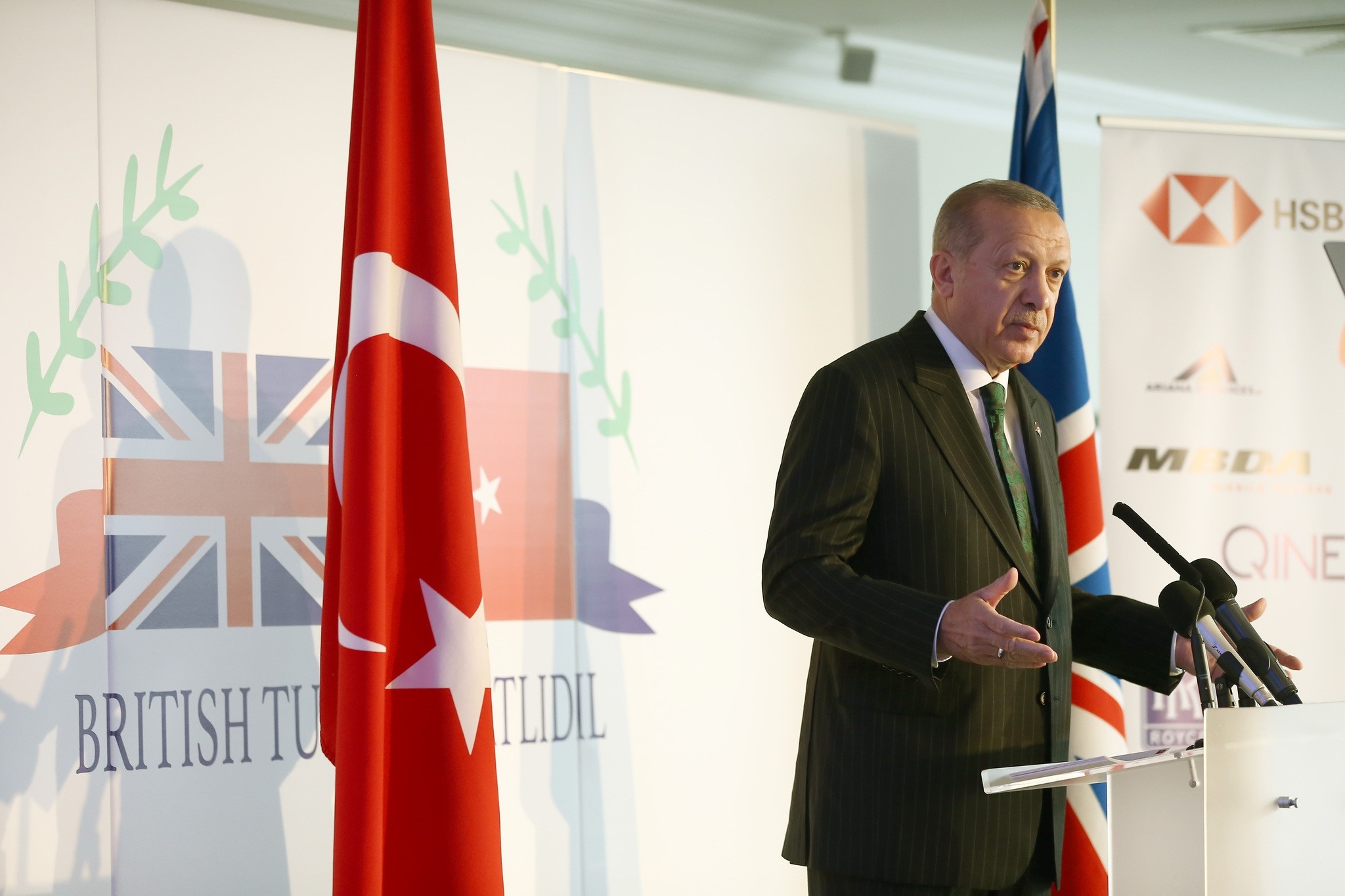 President Erdou011fan made closing remarks at the 7th Turkish-British Tatlu0131dil Forum, elaborated on the bilateral political and economic ties.
by Daily Sabah May 14, 2018 12:00 am

Aiming to turn the post-Brexit period into a lucrative opportunity, Turkey is determined to maintain and reinforce already-positive ties with the U.K. with more cooperation in defense, tourism and trade

Considered an important step to reinvigorate Turkish-British bilateral ties, President Recep Tayyip Erdoğan's visit to the U.K. will concentrate on cooperative opportunities, particularly in defense, tourism and trade, providing a platform to discuss ways to reinforce commercial ties between Turkey and the U.K. Ahead of his visit, President Erdoğan emphatically said Turkey and the U.K. aim to sustain economic cooperation without interruption in the era after the Brexit. "As Turkey and the U.K., we aim to transform the post-Brexit period into an opportunity to further improve already positive economic cooperation and take firms steps toward that end," the president said at the press conference before he left for the U.K.

Erdoğan recalled that the Talıdil Forum was launched in 2011 during his term as prime minister, while he was visiting the U.K. The president said that the function and operational scope of the forum would be further improved in the upcoming period.

"Turkey attributes great importance to its collaboration with the U.K., and the Tatlıdil Forum has made significant contributions to strengthen cooperation between the two countries,"

He indicated to the press that he will have a meeting with Queen Elizabeth on May 15 and British Prime Minister Theresa May. Turkish and British officials are also expected to hold delegation and one-to-one meetings.

President Erdoğan also said that cooperation opportunities in defense would also be discussed.

TAI's TF-X is a twin-engine all-weather Turkish aerial superiority fighter jet. The thrust of each motor is said to reach 20,000 pounds. The jet will also be able to reach an altitude of 55,000 feet, while its range will be around 600 miles.

The president recalled that bilateral trade volume with the United Kingdom reached $16.2 billion in 2017 and that this year bilateral trade grew by 39 percent in January-March alone, reaching $5 billion.Erdoğan pointed out that they aim to reach $20 billion in bilateral trade volume. "I believe that the potential of the two countries is above this figure. To achieve this goal, investments and joint projects are especially important," Erdoğan said, adding that the United Kingdom has been among the countries with the most investments in Turkey by investing close to $10 billion directly in the country in the last 15 years.

Erdoğan noted that especially in terms of systems for TAI and the British defense industry, these companies are collaborating on the national fighter jet project designed as the fifth-generation fighter jet. "Hopefully, we will undertake many more joint projects with strategic priorities in the field of defense industry. As the governments of both Turkey and the U.K., we want our economic cooperation to continue without interruption after Brexit," Erdoğan continued. "

this regard. The president will also be speaking at think tank Chatham House and meeting investors. European Union Affairs Minister Ömer Çelik made remarks at a panel focusing on post-Brexit Turkey-U.K. and EU-U.K. relations with Alan Duncan, Britain's minister for Europe and the Americas, at the 7th Tatlıdil Forum. Çelik said that as the U.K.'s departure from the union would affect bilateral ties due to Turkey's Customs Union with the bloc and other regulations under EU law, an independent free-trade agreement is expected to be signed between Turkey and the U.K. in the post-Brexit era.