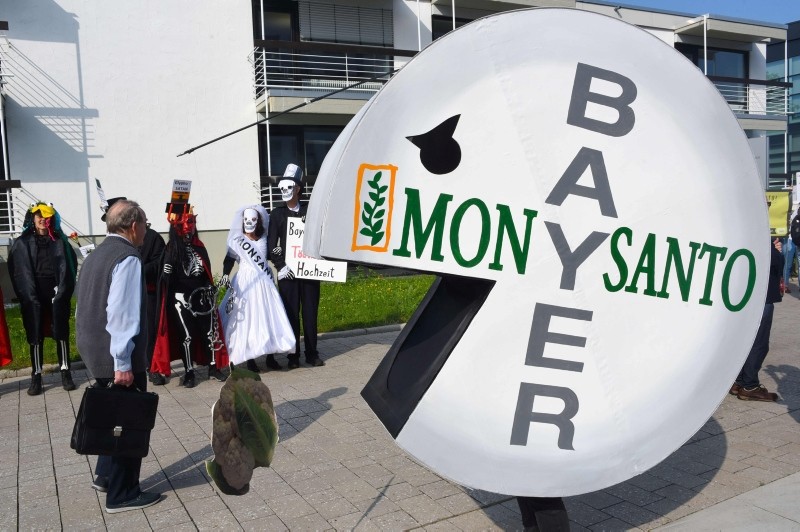 In this file photo taken on May 25, 2018, a protester wears a pill shaped costume bearing the names of Bayer and Monsanto during a demonstration outside the World Conference Center in Bonn, western Germany. (AFP Photo)
by Compiled from Wire Services Jun 07, 2018 12:00 am

Bayer said that it is now the sole owner of the company and Monsanto shares will no longer trade on the New York Stock Exchange. Bayer has put the cost of the deal at some $63 billion including debt.

To obtain regulatory approval, Bayer has committed to divest some businesses, agreeing among other things to the U.S. government's demand that it sell about $9 billion in agriculture activities. It said the process of integrating Monsanto is expected to start in about two months.

"We will be even better placed to help the world's farmers grow more healthy and affordable food in a sustainable manner," Bayer's chief executive Werner Baumann said.

Executives are betting big on projections that around 10 billion people will live on Earth by 2050, meaning more food must grow on the same amount of arable land.

They say that can best be achieved with technologies rejected by green organizations and politicians, including genetically-modified (GM) seeds designed to resist strong pesticides.

Modified crops and digital tools to help farmers adapt to the weather and monitor the health of their fields could also help swell harvests threatened by climate change.

While CEO Baumann promised the Bayer-Monsanto marriage would "create significant value" for shareholders, he added that "our sustainability targets are as important to us as our financial targets."

What's in a name?

Bayer is as keen to ease pressure from environmentalists and politicians as it is to satisfy investors.

A worldwide backlash against "industrial agriculture" and Monsanto in particular prompted executives to announce this week that the name will be abandoned.

Campaigners have battled for decades against the St Louis-based firm and its products, including controversial herbicides like glyphosate, suspected of causing cancer and the subject of a huge political row in the European Union.

Meanwhile Monsanto's GM seeds have met fierce resistance in Europe and elsewhere around the world, pushing Bayer into a 2016 promise not to introduce modified crops on the Old Continent.

"We will listen to our critics and work together where we find common ground," Baumann told journalists Monday.

But "agriculture is too important to allow ideological differences to bring progress to a standstill," he added.

Monsanto products like glyphosate-containing Roundup or seed brands like Dekalb and De Ruiter will remain unchanged following the merger.

"The model of development that underpins Bayer's purchase of Monsanto is diametrically opposed to the transition from our production-driven model to a more sustainable one that respects the environment, as citizens are hoping for," Eric Andrieu, agriculture spokesman for the Socialist group in the European Parliament tweeted Thursday.

Shares in Bayer slightly underperformed the DAX index of blue-chip German shares around after 1315 GMT, losing 0.2 percent to trade at 99.17 euros against a flat market.