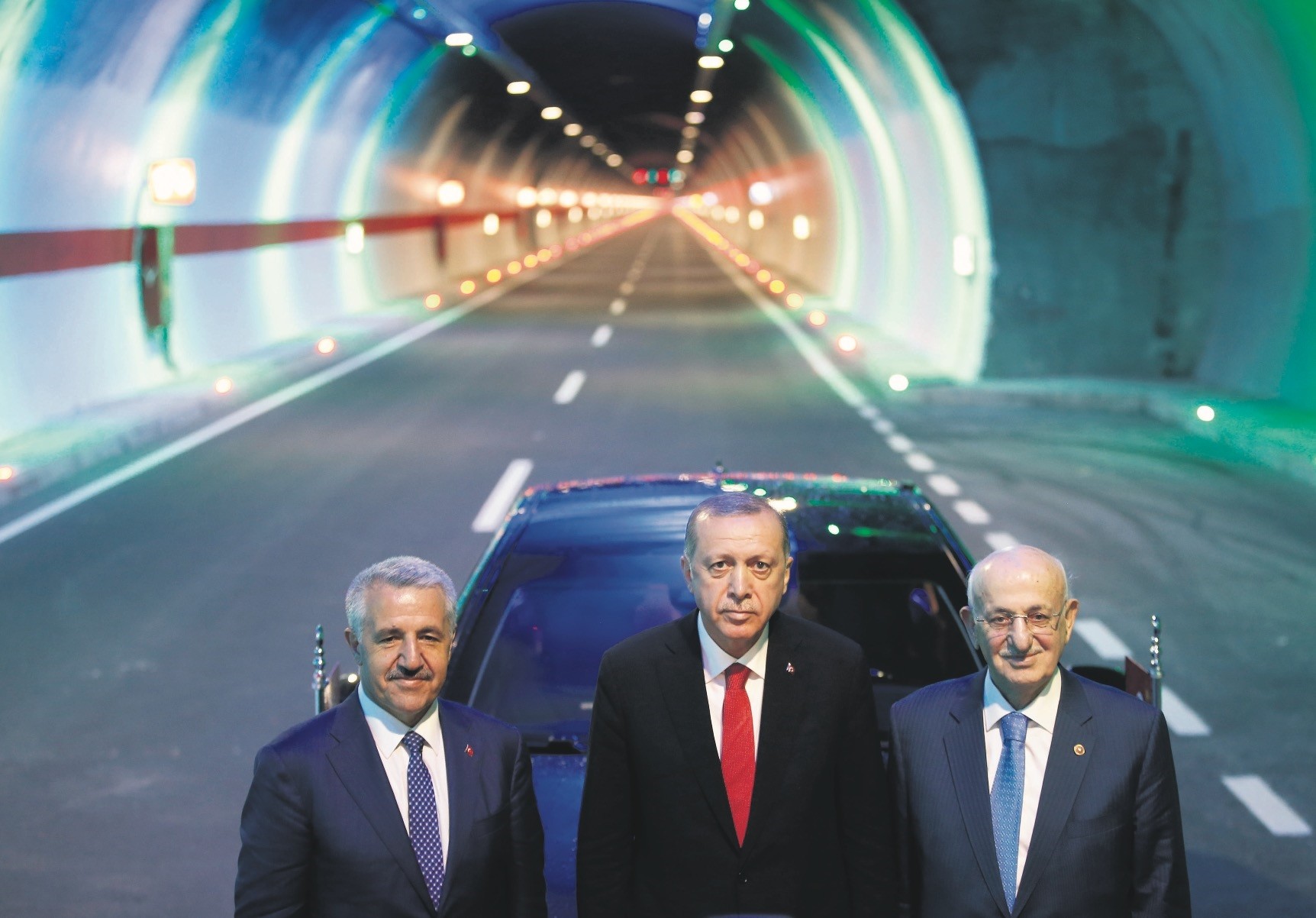 Turkey's second-longest and the world's fourth-longest highway tunnel stretching 14.3 kilometers was inaugurated in the eastern Black Sea province Rize yesterday. President Recep Tayyip Erdoğan and Transport, Maritime Affairs and Communication Minister Ahmet Arslan were both in attendance for the opening ceremony of the Ovit Tunnel, which was constructed at an altitude of 2,640 meters on Mount Ovit in Rize's İkizdere district. Speaking at the opening ceremony, President Erdoğan stressed that the Ovit Tunnel is the starting point of Turkey's north-to-south corridor and has immensely facilitated the transportation between the north-south axis to a great extent.

"Ovit is not simply an infrastructure project, but is of great strategic importance due to its location on the Caucasian corridor that opens to Europe and Central Asia," he added. The project facilitates freight transportation and boosts connectivity mechanisms between the region and neighboring countries, as well as major ports. Plans for the Ovit Tunnel, which was brought to the agenda as the Rize-Erzurum Highway and Tunnel Project in the development plans of the Ottoman State in 1880, were laid out on May 13, 2012 under then-Prime Minister Recep Tayyip Erdoğan's leadership.

A ground-breaking ceremony dubbed "Light at the End of the Tunnel" was held on Nov. 11, 2016 with Prime Minister Binali Yıldırım in attendance.

The tunnel will ease transportation between the Baku-Tiflis-Kars Railway and it is also expected to reinvigorate the historic Silk Road.

When connected to other road projects, the tunnel will help provide an uninterrupted link between the Silk Road and the Ural Mountains, connecting Turkey to northern China and constituting an important part of the middle corridor on the One Belt One Road (OBOR) initiative that aims to revive the ancient Silk Road.

The Ovit Tunnel is just one of many road projects the government has been working on. The New Zigana Tunnel which is being constructed in another Black Sea province of Trabzon take over the crown as Turkey's longest tunnel when finished in 2020.

The Ovit Tunnel is located in a strategic region of eastern Turkey and will be linked to ports from which goods are exported to neighboring countries. Moreover, the tunnel will ease transportation to the Baku-Tiflis-Kars Railway, which will be operational by the end of the summer. The highway tunnel is also expected to reinvigorate the historic Silk Road. When connected to other road projects, the tunnel will help provide an uninterrupted link between the Silk Road and the Ural Mountains, offering easy access to the Baku-Tiflis-Kars Railway, connecting Turkey to Northern China and constituting an important part of the middle corridor on the One Belt One Road (OBOR) initiative that aims to revive the ancient Silk Road.

Such infrastructure transportation projects are believed to reveal the region's trade potential. In that regard, the tunnel is expected to make Erzurum a warehouse and storage hub that is connected to ports; hence, facilitating freight shipment to neighboring countries.

Moreover, the lighting and interior design of the Ovit Tunnel are being projected as a model of exemplary production in Turkey.

While lighting in other tunnels in Turkey is typically provided with one channel, lighting in the Ovit Tunnel will be specially designed via a double channel, eliminating the dangers of lack of visibility and lack of attention among drivers due to the length of the tunnel.

Additionally, the inside of the tunnel will be painted with red stripes on white backgrounds to increase safety, while rest areas along the motorway will be specially painted and illuminated, preventing the loss of visibility among drivers in the 14,300 meter-long tunnel (14.3 km) and offering them comfortable places to pull over.

During his speech at the ceremony, President Erdoğan also elaborated on Turkey's infrastructure and transportation development over the last 16 years. He stressed that the ruling Justice and Development Party (AK Party) governments have built nearly 20,000 kilometers of highways across Turkey.

The president also stated that in 2002 Turkey had 26 airports, but the number rose to 55 with an addition of 29 airports across the country.

Another visionary tunnel project is the Eurasia Tunnel which connects the Asian and European continents underneath the Marmara seabed which became operational in December 2016. The tunnel has become a practical solution to Istanbul's heavy traffic congestion and has cut down travel time between the two sides of Istanbul to just 15 minutes.

A study on the economic gains of the tunnel revealed that during its first year of operation, the Eurasian Tunnel had provided TL 895 million thanks to a 323 million-hour saving and TL 286 million with 30,000 tons of fuel saved; a further TL 23 million was also saved thanks to the prevention of 18,000 tons of carbon emission.

The length of hot asphalt-covered roads, which increase the comfort and life span of the roads, have been increased from 8,591 km to 23,559 km.

In order to increase safety in road transport up to world standards and provide the best road transportation opportunities to the regions that have been neglected for many years, the divided highway works will be continued and the divided highway length of 26,017 kilometers is planned to be increased to 36,500 km by 2023. A number of highway and tunnel projects still continue across Turkey.