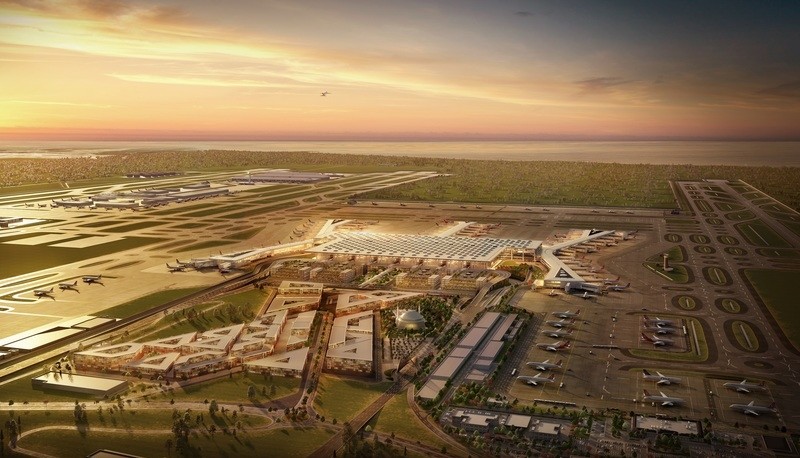 Currently under construction, Istanbul New Airport is expected to formally open to air traffic on Oct. 29.
by Daily Sabah with AA
Jul 12, 2018 12:00 am

After the restructuring of the Transportation and Infrastructure Ministry, which was formerly the Transportation, Maritime Affairs and Communication Ministry in the parliamentary system, attention has now turned to Turkey's mega-projects that set a worldwide example. The processes of Istanbul's new airport, Kanal Istanbul, the three-story Grand Istanbul Tunnel and the Northern Marmara Highway will be expedited.

Cahit Turan was appointed to the Transportation and Infrastructure Ministry after the new presidential governance system took effect with President Recep Tayyip Erdoğan taking his oath on Monday. Turan has a full agenda of mega-projects to finalize and launch.

One of these projects is Istanbul's new airport, the first phase of which will start operating on Oct. 29. Turkey's largest city's new airport will harbor a living area of 100,000 square meters and have a parking lot that accommodates 25,000 vehicles. The airport will allow landing and taking-off of 3,500 airplanes and will have 143 boarding bridges as well as a baggage system of 42 kilometers. It is estimated that the airport will generate TL 73 billion ($15.29 billion) for the Turkish economy and provide jobs for 225,000 people when fully operational. It will have a cargo capacity of 5.5 million tons.

The mega project is expected to make Turkey a significant transfer hub for Western Europe and East Asia. The estimated investment cost of the project is reported to be 10.2 billion euros and it is being constructed with a 22.2 billion-euro concession cost. When all the phases of the airport are completed, the number of passengers is expected to rise to 150,000 million annually.

The world's first three-story tunnel will ensure transit between Istanbul's European and Asian sides via a single route by combining a metro tunnel, necessary for the traffic flow of the 15 July Martyrs Bridge, and a road tunnel that will help ease traffic for the Fatih Sultan Mehmet Bridge. Some 6.5 million people will benefit from the project, to which nine different rail systems will be integrated, once complete.

Currently, surveys for the project are continuing, and the project is planned to be constructed via public-private partnership model.

Kanal Istanbul to be contracted this year

Announced by Erdoğan in 2011, the Kanal Istanbul project will connect the Black Sea in Istanbul's northern European side with the Marmara Sea.

The 45-kilometer-long project will support the economic, social and urban structure of the region and will extend through Istanbul's Avcılar, Küçükçekmece, Başakşehir and Arnavutköy districts.

The 1/100,000-scale route and reserve structure plan for the project was completed recently. Once complete, the canal will reduce shipping traffic, particularly oil tanker traffic, passing through the Bosporus Strait.

The construction phase will employ more than 6,000 people and 1,500 people will be employed in the operation phase.

Recently, Turkish authorities decided to cut the width of the planned Kanal Istanbul from 400 meters to 275 meters, a move that would reduce the TL 65 billion project cost by more than half to TL 30 billion.

Following the completion of geological, geotechnical, hydro-ecological and environmental impact surveys, the bids for the project will be collected this year.

The Northern Marmara Highway is one of the infrastructure projects whose construction will be accelerated in the upcoming period.

The part of the projects that will be integrated to Istanbul's new airport will start operating before the airport becomes operational and the rest will be complete next year.

The Halkalı-Kapıkule High-Speed Train Project will connect Turkey's fast train with Europe. The tender of the 230-kilometer-long line with a cost of around TL 3.2 billion will be launched at the end of this year, while the project is expected to be completed in 2022.

Construction work on the route that will connect Gebze, Sabiha Gökçen Airport, Yavuz Sultan Selim Bridge, Istanbul New Airport and Halkalı New Railway will be made on an area of 124 kilometers. The tender for this project, which is expected to cost around TL 9 billion, is planned to be completed this year, while the line is scheduled to be ready by 2023.