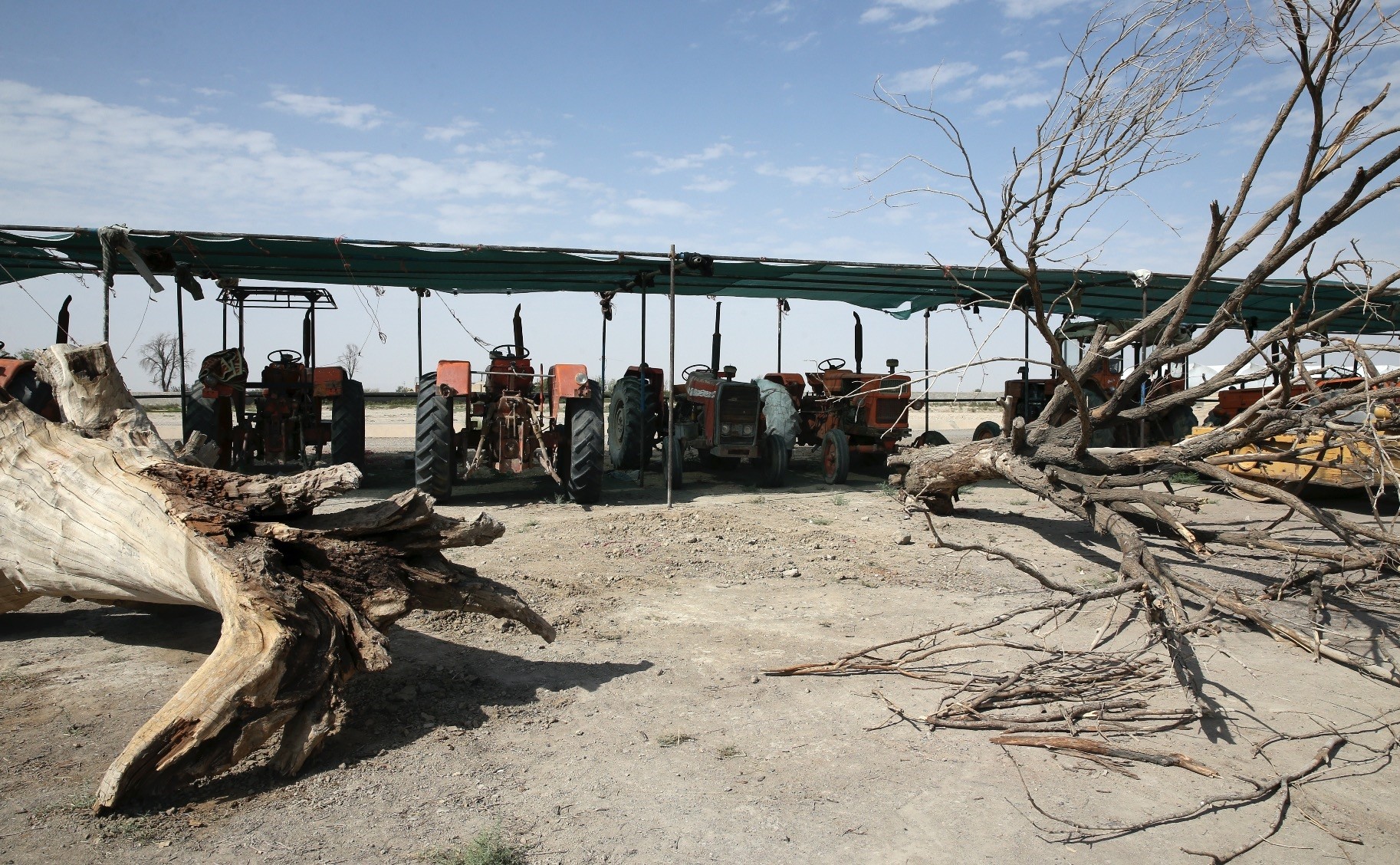 A row of tractors sit idle during a strike by farmers, at the entrance to the town of Varzaneh, in Isfahan province, Iran.
by Compiled from Wire Services
Jul 20, 2018 12:00 am

Economic woes in Iran have fueled unrest as farmers protest the government by parking their tractors, meanwhile India is also alarmed over the suicide of hundreds of farmers in recent months

A group of Iranian farmers gathered around their tractors - long idle, parked at the town entrance next to a canal that once irrigated their fields but has been dry for years - and they protested, pleading for help from the government.

"We are the people," shouted Mostafa Benvidi. "Help the people. At night they go to bed hungry!" They held signs addressing officials they blame for their dried-up fields. "How long will you eat your bread made with our blood?" one sign read. Every day, farmers hold their small protest outside Varzaneh. It's a sign of the anger that has been growing over water shortages caused by a years-long drought but worsened, experts say, by government mismanagement. Protests have gotten larger, with bursts of violence, at a time when economic woes in the country from inflation to unemployment have fueled unrest repeatedly over the last year. In March, Benvidi lost sight in his left eye and has more than 100 pellet shots in his body, suffered during clashes between police and farmers who held a sit-in strike in Varzaneh. Earlier this month, in another part of southern Iran, 11 people were wounded when police broke up a protest in Khorramshahr, where residents complain of brown water coming from their taps.

"Officials just come and promise to deal with the crisis and then just leave," said the 30-year-old Benvidi. He and his family of six siblings and their father used to rely on their 3-hectare farm, planting barley, wheat, corn and cotton. But they haven't been able to farm for years because of lack of water. Now Benvidi is unemployed, and his family lives off the seasonal construction work his brothers get in nearby towns and a sister who weaves carpets. Over the past decade, Iran has seen the most prolonged and severe drought in over 30 years, according to the U.N.'s Food and Agriculture Organization. An estimated 97 percent of the country has faced some level of drought, according to the Iran Meteorological Organization. Isfahan province, where Varzaneh is located, and neighboring provinces in central Iran have been hit particularly hard. The Zayandeh Roud river once watered this region, flowing down from the Zagros Mountains, through the city of Isfahan and through a string of farming towns like Varzaneh and its suburbs, home to 30,000 people, some 550 kilometers (340 miles), south of the capital Tehran.

But it dried up years ago. The fields around Varzaneh are now stretches of desiccated, salt-laced dirt. The cattle are gone. Around 90 percent of the farming activities in the district have faded away, said Reza Khalili, an environmental activist in Varzaneh.

Government policies have worsened the strain from drought and growing population, Khalili and other experts say. Authorities have increasingly built factories, sucking up large amounts of water. In July, officials cut ribbon of another phase of a steel mill in Isfahan. Water has also been diverted to other regions.

Elsewhere, India's rights watchdog has sounded the alarm over the suicide of hundreds of farmers in the western state of Maharashtra in recent months, calling for an official response, according to AFP. Despite state aid, Indian agriculture is in a dire state due to drought, failed crops, poor infrastructure and low prices for produce, but Maharashtra is particularly badly hit. The state government there said last weekend that 639 farmers committed suicide between March and May, an average of seven every day. In recent years the state has seen protests by farmers, sometimes turning violent.

The National Human Rights Commission (NHRC) on Monday told the federal and state governments to report back in a month over the crisis and to spell out what government welfare schemes are available.