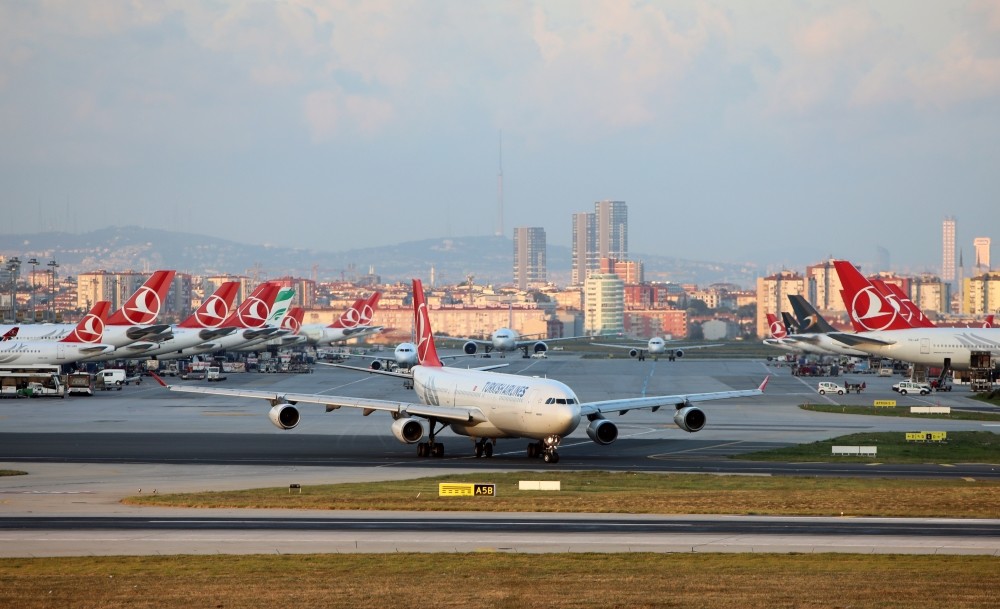 Heavily engaged in preparations for the massive transport of its facilities and equipment, Turkey's national flag carrier Turkish Airlines (THY) is counting down days for the opening of Istanbul's new airport and the first day of operations. The airliner will make the first flight from the new airport, due to open on the 95th anniversary of the Republic of Turkey on Oct. 29, to the capital Ankara on Oct. 31 at 2:00 p.m., THY Chairman İlker Aycı said at a meeting yesterday.

"We are preparing for the world's most expansive transport, the largest moving process to Istanbul's new airport. Solely for THY, 5,000 trucks will be deployed in the transfer of all equipment and facilities of the airliner to the new airport, which will last 45 hours under the coordination of the General Directorate of State Airports Authority," Aycı said and continued, "Following the massive migration, THY will carry out its first flight to the capital city Ankara, where Turkish Republic was founded, at 2.00 pm." The first overseas flights will be made to the Turkish Republic of Northern Cyprus and Azerbaijan, he noted, referring to previous statements.

As part of preparations, the first round of trials, during which THY staff practiced mock operations including airport check-in counter services, baggage handling services and others activities, have started. The training will end with the handling of aircraft operations.

Chairman Aycı also noted that when subway transportation is integrated with the airport, which is expected soon after the airport becomes operational, it will carry passengers to Istanbul's city center within 26 minutes.

Expansion of destinations to continue at Istanbul new airport

Turkey's national flag carrier currently flies to 304 destinations around the world and has a fleet consisting of 325 airplanes, with the addition of new passenger and cargo aircraft due in June 2019, the airliner will continue its fleet growth and expansion of destinations. Out of 325 airplanes, 92 of them are wide-body, along with 215 narrow-body aircraft and 18 cargo planes. By 2023, the airline aims to have a fleet of 500 planes.

While connecting more Turkish cities, including Black Sea cities or popular resort towns, to European and Middle Eastern countries, THY also aims to claim the crown of the airline flying to the most destinations in the world as part of its operations at the new airport with more civil aviation agreements with global airliners, Aycı said.

In the upcoming period, Turkish Airlines is planning to initiate flights to the New York area's Newark Airport, Aycı announced. Additionally, Cancun in Mexico, Lapland in Finland and Luxor in Egypt are among the other destinations the airliner is considering to fly to, the chairman stated.

In the first half of the year, THY's total revenues recorded a 30 percent surge compared to the same period last year and reached $6 billion thanks to significant increases in passenger and cargo revenues. The company aims to reach $12.5 billion in sales revenues by the end of this year.

EBITDAR, which is explained as the earnings before interest, taxes, depreciation, amortization and restructuring or rent costs, also registered a 38 percent increase and hit $1.28 billion.

Having a flight network expanding from Asia to Europe, America and Africa, THY's cargo subsidiary Turkish Cargo also contributed to the airlines' success in the first half of the year. Cargo operations carried 660,000 tons of load with a 28 percent increase compared to the first half of last year. The revenues of Turkish Cargo increased by 35 percent and hit $784 million.

Over 43M passengers chose THY in Jan-July period

The total number of passengers carried by Turkey's national flag carrier saw a 15.2-percent hike on a yearly basis, up from 37.5 million passengers in the same period in 2017.

"Increase in the number of passengers carried in domestic and international lines are 17 percent and 13.8 percent, respectively," Turkish Airlines said.

"Increase in passengers carried in Africa, Europe and Middle East are 10 percent, 9.5 percent and 8 percent respectively," the airline said.

According to the airline's year-end targets, the company expects to carry 75 million passengers - including 33 million on domestic routes, 42 million on international routes - with around an 81-percent passenger load factor.

A total of 50.88 percent of the airline's stocks are publicly traded on Turkey's stock exchange Borsa Istanbul while the rest are owned by the Turkey Wealth Fund.