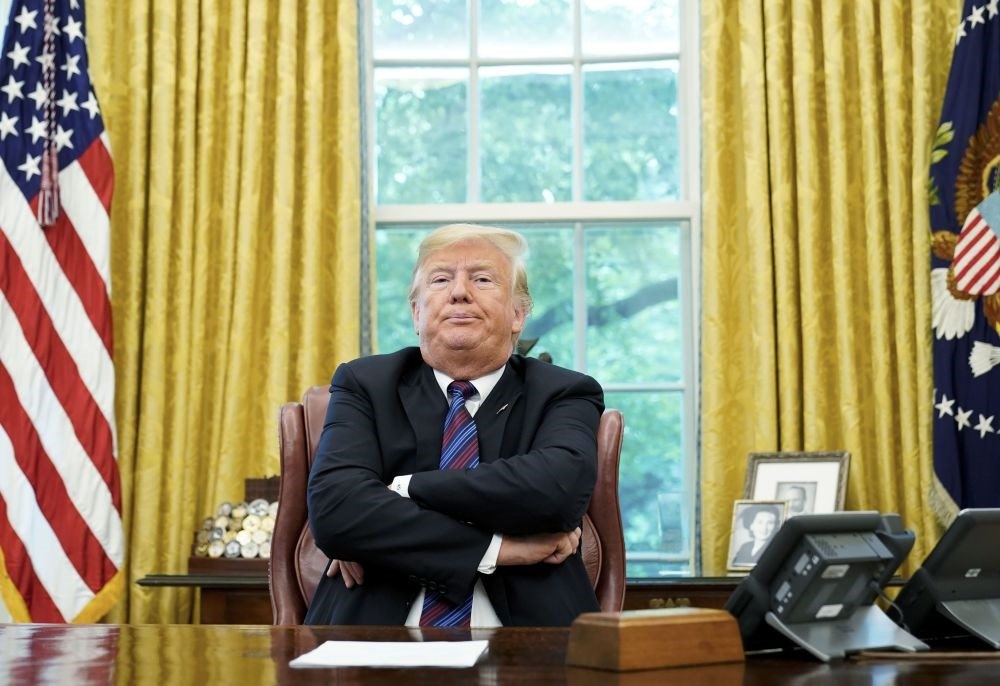 U.S. President Donald Trump speaks to reporters after a phone conversation with Mexico's President Enrique Pena Nieto on trade in the Oval Office of the White House in Washington, D.C., Aug. 27.
by Anadolu Agency Aug 29, 2018 12:00 am

After he withdrew his country from a number of international agreements, U.S. President Trump has now overhauled the 24-year-old NAFTA agreement after he reached a preliminary deal with Mexico, leaving Canada out in the cold in North American trade relations

The North American Free Trade Agreement (NAFTA) has become the latest deal to fall victim to U.S. President Donald Trump when he announced Monday that he would terminate the 24-year-old agreement that includes the U.S., Mexico and Canada.

After withdrawing the U.S. from the Transatlantic Trade and Investment Partnership, the Paris Climate Change Agreement and the Iran nuclear deal, Trump said he would scrap NAFTA because it had "bad connotations."

While Trump called NAFTA "the worst deal ever" during his presidential campaign and after taking office, he also blamed the agreement for the increase in the U.S.' trade deficit.

"NAFTA has contributed to our ballooning annual goods trade deficit, which grew from $115 billion in 1993, the year before NAFTA's implementation, to nearly $800 billion in 2017," the White House said Monday in a statement.

An accord called the United States-Mexico Trade Agreement, which includes key revisions to the NAFTA agreement, was reached Monday between the U.S. and Mexico.

Surprisingly, energy is not included nor modified in the new agreement between the two countries.

During the tenure of the current President Enrique Pena Nieto, Mexico has undertaken a comprehensive energy reform that saw foreign investment flow into the country's energy sector.

Another major surprising development regarding the new U.S.-Mexico trade deal is that the U.S.' steel and aluminum tariffs on imports from other countries will remain.

In March this year, Trump imposed tariffs of 25 percent on steel and 10 percent on aluminum imports from abroad. These are expected to continue for Mexico despite the new trade deal between the two countries.

Mexican Economy Secretary Ildefonso Guajardo said Monday the negotiations regarding tariffs on steel and aluminum are continuing and added that he hopes a solution is found before the trade deal is signed.

WHAT'S IN THE NEW DEAL?

The new trade deal between the U.S. and Mexico mostly makes revisions on auto, intellectual property and agriculture.

Companies are now required to ensure that 75 percent of auto content is made in the U.S. and Mexico, up from the 62.5 percent requirement under NAFTA, according to a statement by the U.S. Trade Representative (USTR).

Auto manufacturers in the U.S. and Mexico are also required to use more local steel, aluminum and auto parts as well.

In addition, the deal stipulates that 40-45 percent of auto content be made by workers earning at least $16 per hour, according to the USTR.

However, the minimum wage in Mexico is $4.71 per day, while the federal minimum wage in the U.S. is much higher at $7.25 per hour. This will result in some portion of manufacturing moving to the U.S. from Mexico, incurring higher costs, and eventually higher prices for consumers.

The new trade deal between the U.S. and Mexico aims to catch up with the contemporary legal and regulatory environments of the technology sector.

The agreement will require enforcement authorities to stop commercial goods that are suspected of being pirated or counterfeited at all areas of entry and exit between the two countries.

On agriculture, "The U.S. and Mexico have agreed to provisions to enhance information exchange and cooperation on agricultural biotechnology trade-related matters," the statement said.

WHAT WILL HAPPEN TO CANADA?

After Trump said he would terminate the NAFTA deal and make a new bilateral trade agreement with Mexico, Canada is now left out in the cold in North American trade relations.

"Canada has been frozen out of those bilateral talks in recent weeks and will now be under heavy pressure to give ground," Paul Ashworth, chief U.S. economist at Capital Economics, said in a note.

Trump said Monday he would call Canadian Prime Minister Justin Trudeau very soon, adding that their northern neighbor has two choices - either it can join the U.S.-Mexico trade deal, or make a separate trade agreement with the U.S.

However, if Trump wants to include Canada into the U.S.-Mexico trade deal, he has until Friday to do so.

When a U.S. president intends to sign a trade deal with another country, he has to notify Congress in 90 days, and then Congress must approve it.

On Dec. 1, Mexican President-elect Andres Manuel Lopez Obrador will take office from President Enrique Pena Nieto, both of whom are required to agree to the new deal.

Consequently, that gives Trump only four business days to reach an agreement with Canada for its inclusion in the U.S.-Mexico trade deal.

Otherwise, the U.S. and Canada can make their own separate trade agreement, while Canada and Mexico can choose to have another bilateral deal on their own as well.

The new trade deal between the U.S. and Mexico plans to be in effect for 16 years with a review every six years. At each of the six-year reviews, the parties can decide to extend the deal for another 16 years, according to the Trump administration official.

The annual trade volume between the U.S., Canada and Mexico is approximately $1 trillion, according to official data.