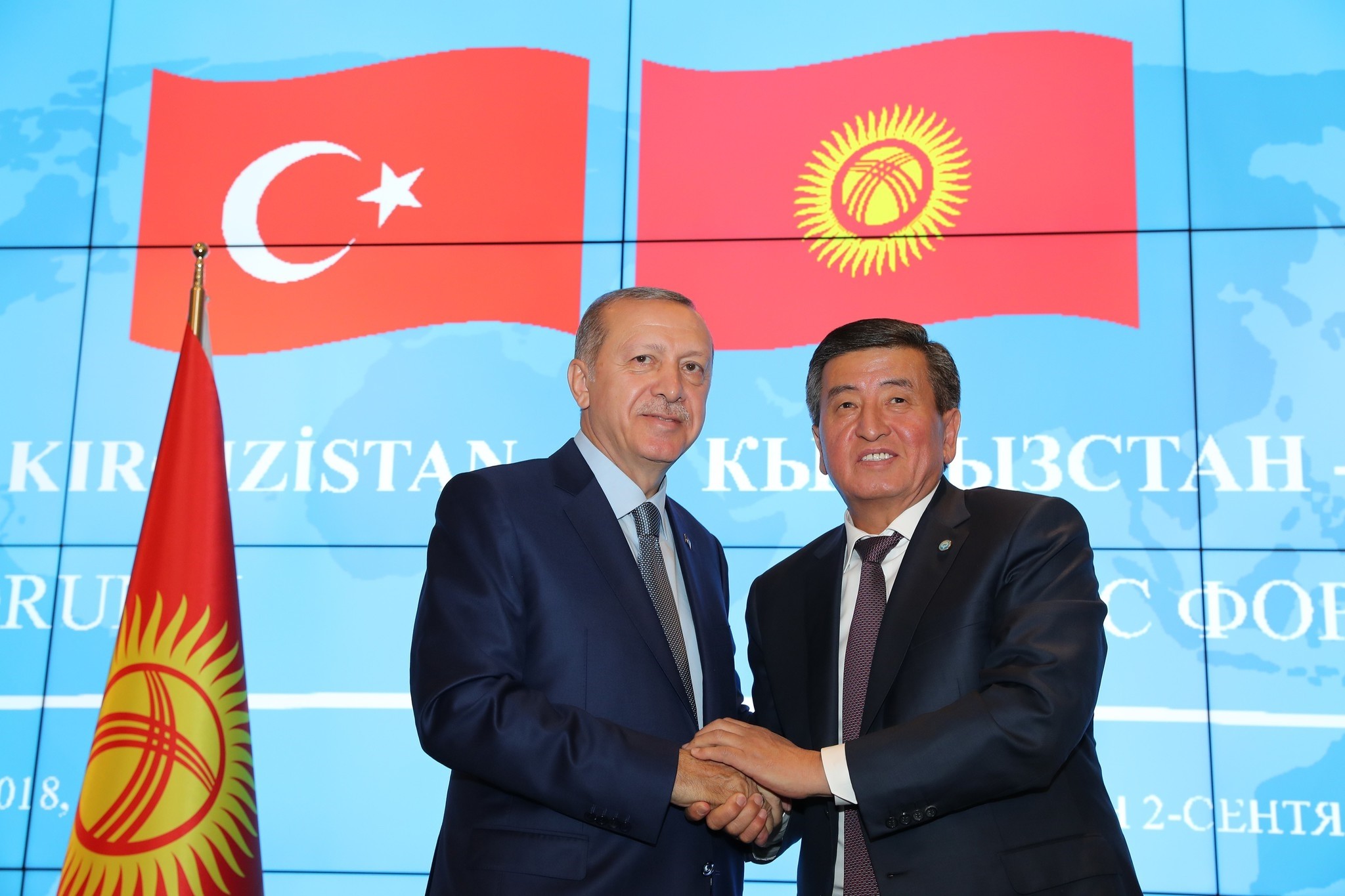 President Recep Tayyip Erdou011fan and Kyrgyzstanu2019s President Sooronbay Jeenbekov shake hands on the sidelines of the Turkey-Kyrgyzstan Business Forum in the Kyrgyz capital Bishkek, Sept. 2.
by Daily Sabah with AA Sep 03, 2018 12:00 am

Turkey and Kyrgyzstan pledged yesterday to further strengthen bilateral economic ties, while emphasizing the importance of using domestic and national currencies for trade between the countries and increasing the bilateral trade volume to the previously set target of $1 billion.

Delivering a speech at the Turkey-Kyrgyzstan Business Forum in the Kyrgyz capital Bishkek as part of his three-day official visit to the country, President Recep Tayyip Erdoğan said that despite the progress made, "Economic and commercial relations between our countries are still far behind the desired levels."

Indicating that some 300 companies with Turkish capital have been operating in various sectors in Kyrgyzstan, Erdoğan said that these companies provide jobs to more than 5,000 Kyrgyz citizens.

Emphasizing that Turkish contractors have so far undertaken 67 projects in Kyrgyzstan with an investment value of nearly $700 million, he said, "Thanks to these projects, our companies have supported the developmental move that Kyrgyzstan has been making since it gained independence. Undoubtedly, we are always proud of our companies' investments here."

Erdoğan noted that the target they set during his visit to Kyrgyzstan in 2013 was a foreign trade volume of $1 billion. He also pointed out that they believe they will carry out many more successful projects in the future.

"First, I call on Turkish businessmen: Kyrgyzstan is a friend and brother country. Prioritize this country in your investments," Erdoğan said.

He added that investment in the Kyrgyz market would also appeal to Kazakhstan, Russia and Belarus, which are members of the Eurasian Customs Union.

Erdoğan said that strong relations between the two countries also need stronger cooperation in the fields of education, development, culture and tourism.

The business forum organized by a private sector delegation headed by Foreign Economic Relations Board (DEİK) Chairman Nail Olpak was attended by around 300 representatives of the business world from the two countries.

The forum saw three agreements signed between the two countries. Cooperation agreements were inked between DEİK and the Investment Promotion and Protection Agency of the Kyrgyz Republic, the Union of Chambers and Commodity Exchanges of Turkey (TOBB) and the Kyrgyzstan Chamber of Commerce and Industry and between Gata Airlines and Transportation Inc. and Manas International Airport.

Trade volume between the two countries was $487.3 million in 2017, according to the Turkish Statistical Institute (TurkStat). Exports to Kyrgyzstan totaled $343.6 million with major products exported being carpets, jewelry, textiles, and accessories and parts for road vehicles.

Imports from Kyrgyzstan were 143.7 million with gold, cotton, legume and copper alloys topping the list of products imported from the country.

Kyrgyzstan's President Sooronbay Jeenbekov called on Turkish investors to invest in the country.

"There is an environment of trust between Kyrgyzstan and Turkey. Our bilateral relations are increasing," Jeenbekov said in his address at the Turkey-Kyrgyzstan Business Forum. Jeenbekov said Turkish businessmen had invested more than $500 million in Kyrgyzstan since 1995. "We wish to export ecological agriculture products to Turkey," he added.

"Our [bilateral] trade volume increased 18 percent in the last 25 years. We do not use our full potential. We need to struggle to increase trade volume to $1 billion," Jeenbekov added.

Underlining that trade wars and protectionist tendencies have necessitated the development of new strategies in many areas, Erdoğan reiterated that international trade's dependence on the dollar is becoming an increasingly bigger problem.

Erdoğan further said, "We need to gradually end the sovereignty of the dollar by using domestic and national currencies among us," adding that countries, firms and traders not only overcome the inherent problems of trade, but also face challenges such as exchange rate pressures emanating from dependence on the dollar. "This system, founded on the claim of 'facilitating trade,' has turned into the greatest impediment to free global trade," Erdoğan concluded.

"They try to cast doubt on Turkey's strong and solid economy via currency manipulations," he said.

Political tensions between Ankara and Washington had sparked worries in markets in August after U.S. President Donald Trump threatened to use economic pressure over an American pastor who faces terrorism-related charges in Turkey. The Turkish lira has been losing its value against the U.S. dollar for the past several weeks after the U.S. president doubled tariffs on Turkish steel and aluminum.