Nike features NFL's Kaepernick in 'Just Do It' ad campaign 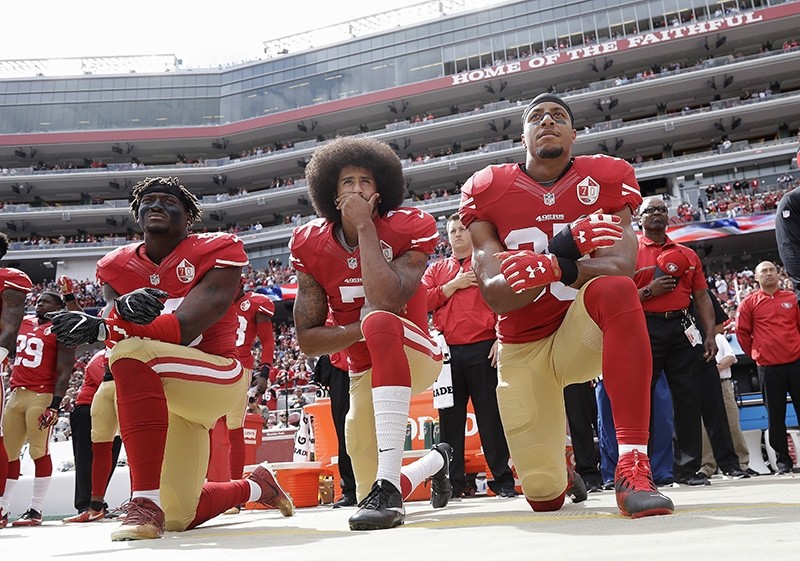 Nike Inc. has chosen Colin Kaepernick, the first NFL player to kneel during the national anthem as a protest against racism, as one of the faces for advertisements commemorating the 30th anniversary of its "Just Do It" slogan, a move that could draw U.S. President Donald Trump's ire.

"Colin has been a Nike athlete since 2011," Nike spokeswoman Sandra Carreon-John said Monday. "Colin is one of a number of athletes being featured as part of our 30th anniversary of Just Do It."

Based on images sent by Nike, other athletes featured in the ad campaign include New York Giants wide receiver Odell Beckham Jr., skateboarder Lacey Baker and Seattle Seahawks linebacker Shaquem Griffin, who is an amputee with one hand.

Former NFL quarterback Kaepernick posted a black-and-white close-up of himself on Instagram and Twitter on Monday featuring the Nike logo and "Just do it" slogan along with the quote, "Believe in something. Even if it means sacrificing everything."

"We believe Colin is one of the most inspirational athletes of this generation, who has leveraged the power of sport to help move the world forward," said Gino Fisanotti, a Nike vice president of brand for North America, according to ESPN, which first reported Nike's decision to use Kaepernick as part of the ad campaign.

Representatives for Kaepernick and the National Football League did not respond to requests for comment on Monday.

Kaepernick was a quarterback with the San Francisco 49ers for six years. He stirred a national controversy by taking a knee while the anthem was played before games during the NFL's 2016 season to draw attention to police killings of black men and other issues.

The anthem protests, soon embraced by other players, raised the ire of some NFL fans and Trump, who has said he would love to see NFL owners fire football players who disrespect the American flag.

The NFL this season has adopted a rule requiring all players to stand during the anthem, although it gave them the option of staying off the field until the ceremony was over. Even so, the protests have persisted through the preseason and the NFL has said it is in discussions with the players union on the policy.

Kaepernick and another former 49ers player, Eric Reid, have not been signed by any of the NFL's 32 teams since their protests spread around the league. Both have filed collusion grievances against NFL owners.

On Thursday, arbitrator Stephen Burbank denied the league's request to dismiss the case, which means he found sufficient evidence for the case to continue and perhaps go to trial.

News of Nike's ad campaign broke just days before the first game of the NFL season on Thursday, when the controversy over pregame protests could flare anew.

"Nike has always been and will continue to be my family's favorite shoe," wrote Twitter user @TheDionneMama.

But other reaction on Twitter was negative. "Time to throw away all my Nike crap," wrote @SportDuh 17.

Kaepernick received an enthusiastic welcome from fans at the U.S. Open's showcase tennis match between Serena and Venus Williams on Friday night when he was shown raising his fist on the big screen.

Nike has in recent months been under scrutiny for its culture and accusations that women are not adequately represented in its leadership ranks. Chief executive officer Mark Parker apologized for the company's work culture in May to employees in a companywide meeting.

Nike, which has said it opposes discrimination and is committed to diversity and inclusion, previously announced "unconscious bias training" for its managers and a review of its human-resources systems.