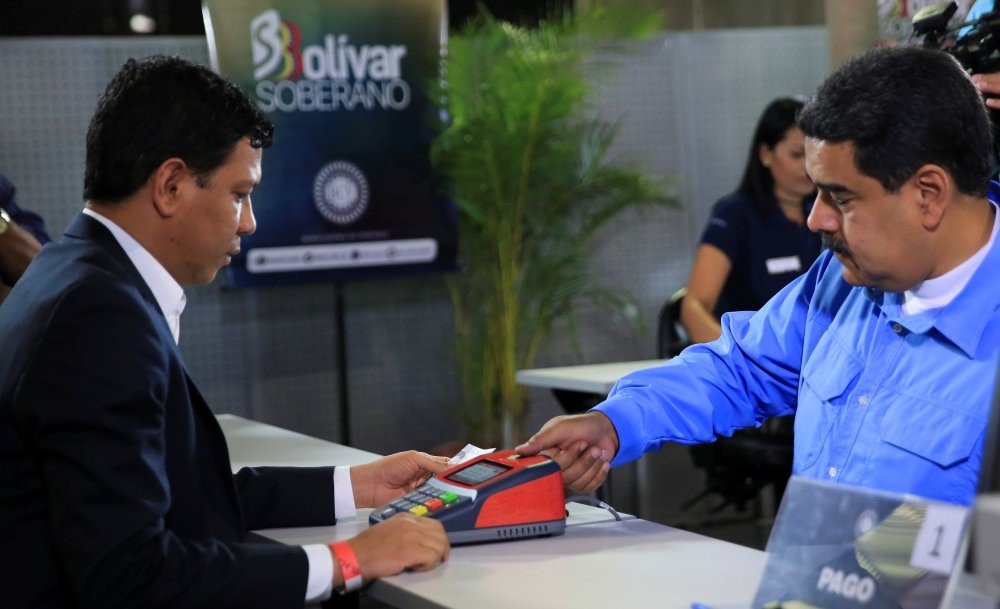 Venezuela's President Nicolas Maduro participates in the process of buying a savings certificate in gold at Venezuela's Central Bank in Caracas, Sept. 3.
by Compiled from Wire Services Sep 05, 2018 12:00 am

With the government launching new reforms yesterday, President Maduro and the first lady made an investment in gold-backed certificates. Venezuela will also hike fuel prices by October

As part of a new plan to crush hyperinflation and reactivate Venezuela's moribund economy, President Nicolas Maduro said he is investing part of his personal savings in a gold-backed certificate. Maduro and First Lady Cilia Flores were the first in line at the central bank in downtown Caracas on Monday as it began selling the certificates, according to AP.

He said he spent 350 bolivars -or about $6 at the recently devalued official exchange rate -acquiring the certificate, which functions like a fixed-term deposit that matures in a year and is supposedly backed by a 1.5 gram piece of gold held with the monetary authority.

"If I had a little more savings in bolivars I would have invested more," Maduro said as cameras were rolling during his televised visit to the central bank. "Cilia had a little more than me, so she bought her certificate for a little ingot of 2.5 grams."

The gold savings plan is part of an economic overhaul slowly taking effect seeking to dismantle decade-old currency and price controls, boost government revenues and jumpstart private investment in the fast-decaying oil industry -the source of nearly all of Venezuela's foreign currency earnings. It's the socialist revolution's most far-reaching attempt to embrace the free market since Maduro took over as president from the late Hugo Chavez in 2013.

Venezuela will also hike the price of its heavily subsidized gasoline by October, President Nicolas Maduro said on Monday, according to Reuters. Despite the crisis, fuel prices are set so low that the equivalent of $1 buys nearly 400,000 gallons of fuel. That cripples the state's hard currency earnings and drives a lucrative smuggling trade. The government yesterday launched a new payment system using a state-backed identification card in border states to limit smuggling, Maduro said, and will increase prices to international levels once that system is in place.

"During the course of September, October, once that system is working, we will establish the subsidy systems and the price of gasoline will be set at the international price," he said during a televised broadcast. Maduro did not offer additional details.

Any increase would mark the first time in 20 years that Venezuela has significantly raised fuel prices, which have been a sensitive issue ever since riots broke out in 1989 in response to austerity measures that included higher gasoline prices. Government regulations have kept prices steady at the pump despite inflation that is expected to hit 1,000,000 percent this year, according to the International Monetary Fund. Drivers have for years paid for fuel in loose change, often tipping service station workers more than they pay to fill their tanks. Experts estimate Venezuela loses at least $5 billion a year as a result of not selling gasoline at international prices. The new system revolves around a state-backed ID known as the Fatherland Card, which Maduro says is meant to provide better services to citizens through data collection.

Venezuela's government also said on Monday migratory patterns out of the OPEC nation are "normal" and that the situation was being exaggerated to justify an intervention by foreign powers. "There has been an intent to convert a normal migratory flow into a humanitarian crisis in order to justify an international intervention in Venezuela," Vice President Delcy Rodriguez told a news conference. "We will not allow it."

She criticized foreign agencies for relying on figures of Venezuelan emigration provided by other countries but did not provide Venezuela's own figures. Colombia, Peru and Ecuador asked on Thursday for international aid to manage the migration surge that is overwhelming public services.