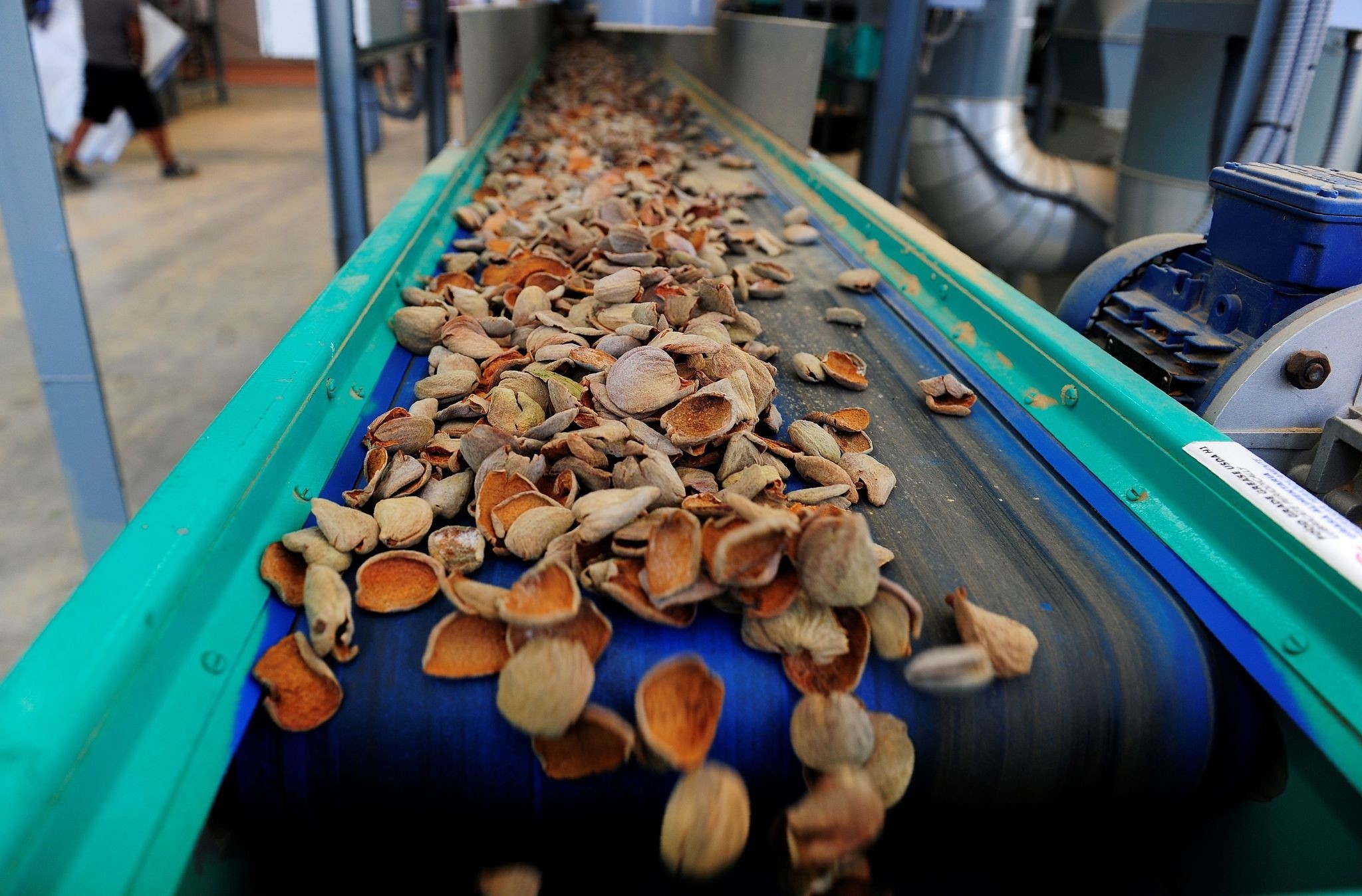 Almond shells are transported on a conveyor belt in an almond processing factory in Cordoba.
by Sep 17, 2018 12:00 am

Surging worldwide demand for almonds is pushing Spanish farmers to replace traditional wheat and sunflower fields with almond orchards, transforming the landscape in the south of Spain

Almonds, thanks to their well-advertised health benefits, are enjoying global demand as snacks or in derivative forms like almond milk and almond flour, used as dairy or wheat alternatives. In the Guadalquivir valley in the parched southern region of Andalusia "the landscape has changed so much in recent years that wild boar now come down from the hills to eat almonds", said agronomist Curro Lopez, 50, an expert on almond farming with Spanish agriculture machinery firm Agrosan. During the harvest, which in Santa Cruz near Cordoba began at the end of August, large nets are laid on the ground to collect almonds which are then shaken off the wispy branches of the trees by a machine in just a few seconds. Spain is on track to harvest over 61,000 tons of almonds during the 2018-19 season, a record amount and a 15-percent rise over the previous season, according to estimates from a national producers' association. Spain is the world's third biggest almond producer behind Australia, and the United States which is the world's top producer by a huge margin. California alone accounts for 80 percent of the world's supply of almonds, according to its powerful almond board, which tirelessly promotes the benefits of the nut as a source of protein and healthy fats.

Spain, which uses almonds in many traditional desserts such as nougats, continues to import huge quantities of almonds from California despite being a major producer of the nut itself.

"When we think that it was Spanish missionaries who brought almonds to the United States" in the 18th century, said Jose Millan, as he supervised the harvesting of almonds from his family's land in Santa Cruz. The 61-year-old was one of the first to introduce intensive almond farming to Andalusia a decade ago. Today, 62 hectares out of the family's 650 hectares of land are dedicated to the crop. His neighbors have followed his example. While almond trees were largely absent from the Andalusian countryside, today irrigated almond orchards can be found everywhere in the region. Forsaking sunflowers or wheat, farmers are betting on almond trees which can easily complement olive tree harvesting since the same tree "shaker" machines can be used on both crops.

"World almond production doubled in the last 10-12 years, going from 600,000 tons to 1.2 million tons, and consumption has increased at the same rhythm," said Cristobal Perez, who runs a factory that opened recently near Cordoba which transforms almonds into by-products.

Farmers have been encouraged to grow almonds due to rising prices which went from three euros ($3.5) per kilo (2.2 pounds) to nine euros per kilo four to five years ago, he said. Farmers are currently getting about five euros per kilo of almonds, he added.

Lopez, the agronomist, planted over 16,000 almond trees in what used to be alfalfa fields near the Guadalquivir river last year. They are expected to bear their first fruits in two years.

Like many other area farmers, he argues US farmers have used marketing to sell their "insipid" almonds almost everywhere. The new almond plantations will allow Spain to sell to factories "huge lots of just one variety" of almonds, and use new growing techniques to ensure that there are no bitter almonds among the batches, a problem which could give Spanish almonds a bad reputation, Lopez said. Amid concerns over global warming and recurring droughts in Spain, almond farmers stress they are taking steps to ensure their thirsty crops consume as little water as possible. Lopez uses an electronic device in his orchard that measures air temperature and soil humidity levels to carefully dose the amount of water he uses to irrigate his almond trees.