US Treasury Secretary Mnuchin withdraws from Saudi summit over Khashoggi 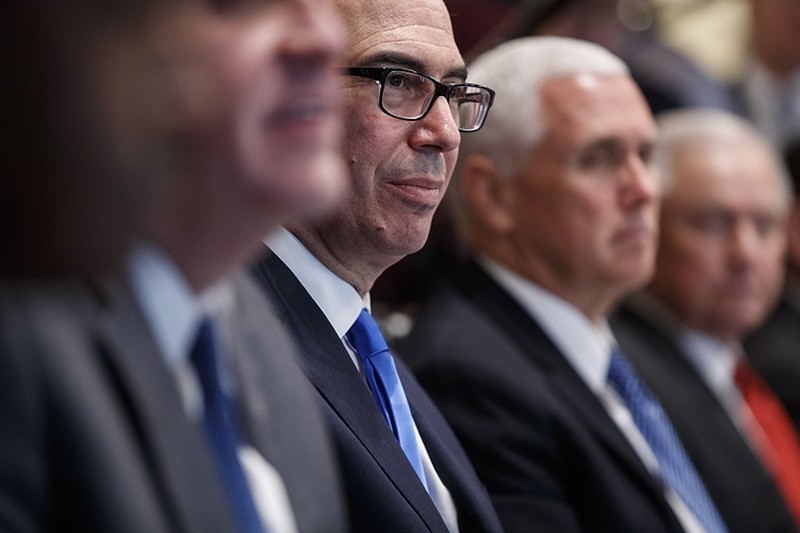 U.S. Secretary of Treasury Steve Mnuchin listens as US President Donald J. Trump delivers remarks during a Cabinet meeting in the Cabinet Room of the White House in Washington, D.C., Oct. 17, 2018. (EPA Photo)
by Daily Sabah with Wires
Oct 18, 2018 12:00 am

U.S. Treasury Secretary Steven Mnuchin on Thursday said he would no longer attend next week's investment conference in Saudi Arabia over the disappearance of Washington Post journalist Jamal Khashoggi.

"Just met with @realDonaldTrump and @SecPompeo and we have decided, I will not be participating in the Future Investment Initiative summit in Saudi Arabia," Mnuchin wrote on Twitter after meeting with the president and secretary of state.

Secretary of State Mike Pompeo just returned from Saudi Arabia and briefed Trump on the status of the investigation into the journalist's disappearance in Turkey.

Trump has urged patience in the wake of U.S.-based Khashoggi's disappearance earlier this month during a visit to the Saudi consulate in Istanbul, and said he took the matter seriously.

U.S. Republic Senator Lindsey Graham, who has expressed outrage at the Saudi crown prince over the Khashoggi case, said Thursday he "very much" agreed with Mnuchin's withdrawal from the investment conference, adding that the Trump administration "made the right call."

"Saudi Arabia is a strategic ally, but the last thing we want to do is continue on with a 'Business as Usual' approach until the killing of Mr. Khashoggi is resolved," he said on Twitter.

Turkish officials have said they believe Khashoggi, a Washington Post columnist who was critical of the authoritarian kingdom's Crown Prince Mohammed bin Salman, was murdered inside the consulate. The Saudis have denied the allegations.

His withdrawal comes after top financial, trade and foreign officials from Britain, France, Germany and the Netherlands also dropped out.

Goldman Sachs Group Inc will not send any of its executives to a Saudi investment conference next week, Chief Executive Officer David Solomon said in an interview with CNBC on Thursday.

Le Maire said Saudi authorities needed to explain the disappearance of Khashoggi after he went to the Saudi consulate in Istanbul on Oct. 2.

"No, I will not be going," Le Maire told Public Senat TV. "The allegations are serious."

Paris and Riyadh enjoy close diplomatic ties and commercial relations spanning energy, finance and arms. Le Maire said he had informed his Saudi counterpart of his decision not to travel to Riyadh on Wednesday.

Asked if the move might jeopardize bilateral relations between the two countries, Le Maire said: "Absolutely not."

The Saudis have said they plan to move forward with the conference, scheduled for Oct. 23-25, despite a wave of cancellations by high-profile business, government and media leaders.

The chief executives of HSBC, Standard Chartered, Credit Suisse and the London Stock Exchange, as well as the Chairman of BNP Paribas withdrew Tuesday.