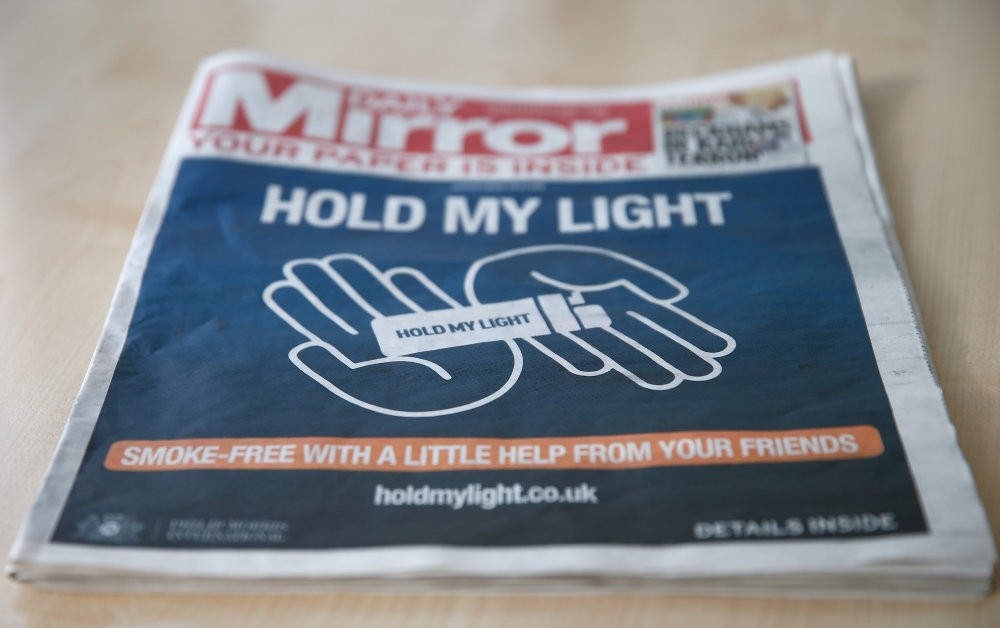 The front of a four page wraparound advertisement by Philip Morris calling on people to quit smoking for 30 days is seen on the front page of the daily Mirror in London, Oct. 22.
by Oct 23, 2018 12:00 am

Marlboro cigarette maker Philip Morris International drew accusations of hypocrisy yesterday after using a four-page newspaper advertisement to urge smokers to quit cigarettes. The wraparound advertisment covering Monday's Daily Mirror tabloid is part of Philip Morris's 2 million pound ($2.61 million) "Hold My Light" campaign, in which the world's biggest international tobacco company is pushing a 30-day challenge for people to give up smoking. The campaign also features a video and a website where smokers can sign up for the challenge and gain information to help them to kick the habit.

Cigarettes account for the vast majority of Philip Morris's revenue, but the company has repeatedly stated a longer-term vision to replace cigarette sales with products such as its IQOS tobacco-heating device, which it says is less dangerous.

"This is staggering hypocrisy from a tobacco company to promote its own smoking-cessation products in the UK while continuing to promote tobacco cigarettes across the world," Cancer Research UK said. "The best way Philip Morris could help people to stop smoking is to stop making cigarettes."

Philip Morris has said that Britain, where advertising and marketing of cigarettes is prohibited, could eradicate cigarettes in coming years. British health regulators have also endorsed e-cigarettes as a way to help people to quit.

"This campaign is simply PR puff," said Hazel Cheeseman, director of policy for Action on Smoking and Health.

"If they were serious about a smoke-free world they wouldn't challenge tobacco legislation around the world but instead support regulations that will really help smokers quit and prevent children from taking up smoking."