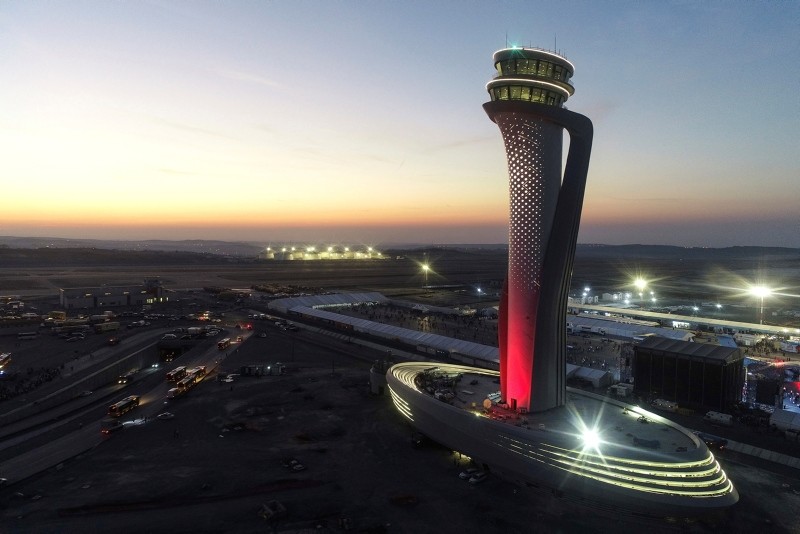 Istanbul New Airport is ready for its official opening on Monday, with the inauguration ceremony taking place on Turkey's Republic Day.

The ceremony will take place on Republic Day, the 95th anniversary of the founding of the Turkish Republic, with the attendance of President Recep Tayyip Erdoğan and more than 50 foreign leaders, ministers and high-level officials.

The 6-billion-euro ($7.2-billion) first stage, which was built in nearly three years through a public-private partnership model, is among a set of mega projects planned as part of a series of objectives for Turkey's 2023 centennial.

Istanbul New Airport, on shores of the Black Sea, will serve 90 million passengers annually in its first phase. On Monday, two runways — 3,750 and 4,100 meters long — will go into service as a part of the first phase, including three separate airstrips.

At its completion in ten years, it will occupy nearly 19,000 acres and serve up to 200 million travelers a year with six runways. That's almost double the traffic at world's biggest airport currently, Atlanta's Hartsfield-Jackson.

"This airport is going to be the most important hub between Asia and Europe," Kadri Samsunlu, head of the IGA, the contractor and operator of the project, told reporters Thursday.

The airport's interiors nod to Turkish and Islamic designs and its tulip-shaped air traffic control tower won the 2016 International Architecture Award. It also uses mobile applications and artificial intelligence for customers, is energy efficient and boasts a high-tech security system.

One of Turkey's mega projects — Istanbul New Airport — will be inaugurated Monday, when the country celebrates Republic Day, with the attendance of President Erdoğan and more than 50 high-level foreign officialshttps://t.co/HoFL2sxg5f pic.twitter.com/OqelSIdW2F

All aviation operations will move there at the end of December when Istanbul's main international airport, named after Turkey's founder Mustafa Kemal Atatürk, is closed down. Atatürk Airport, which now handles 64 million people a year, will transition to other uses, such as training activities, aviation fairs, and civil use. On the Asian side of the city, Sabiha Gokcen Airport handled 31 million passengers last year. It will remain open.

Erdoğan is expected to announce the official name of the new airport, part of his plan to transform Turkey into a global player.

The national flag carrier Turkish Airlines will launch its first flights out of the new airport to three local destinations: Ankara, Antalya and Izmir. It will also fly to Baku and Ercan in the Turkish Republic of Northern Cyprus (TRNC).

At full capacity, Istanbul's new airport is set to become a global aviation hub by hosting more than 100 airlines and flights to over 300 destinations around the world.