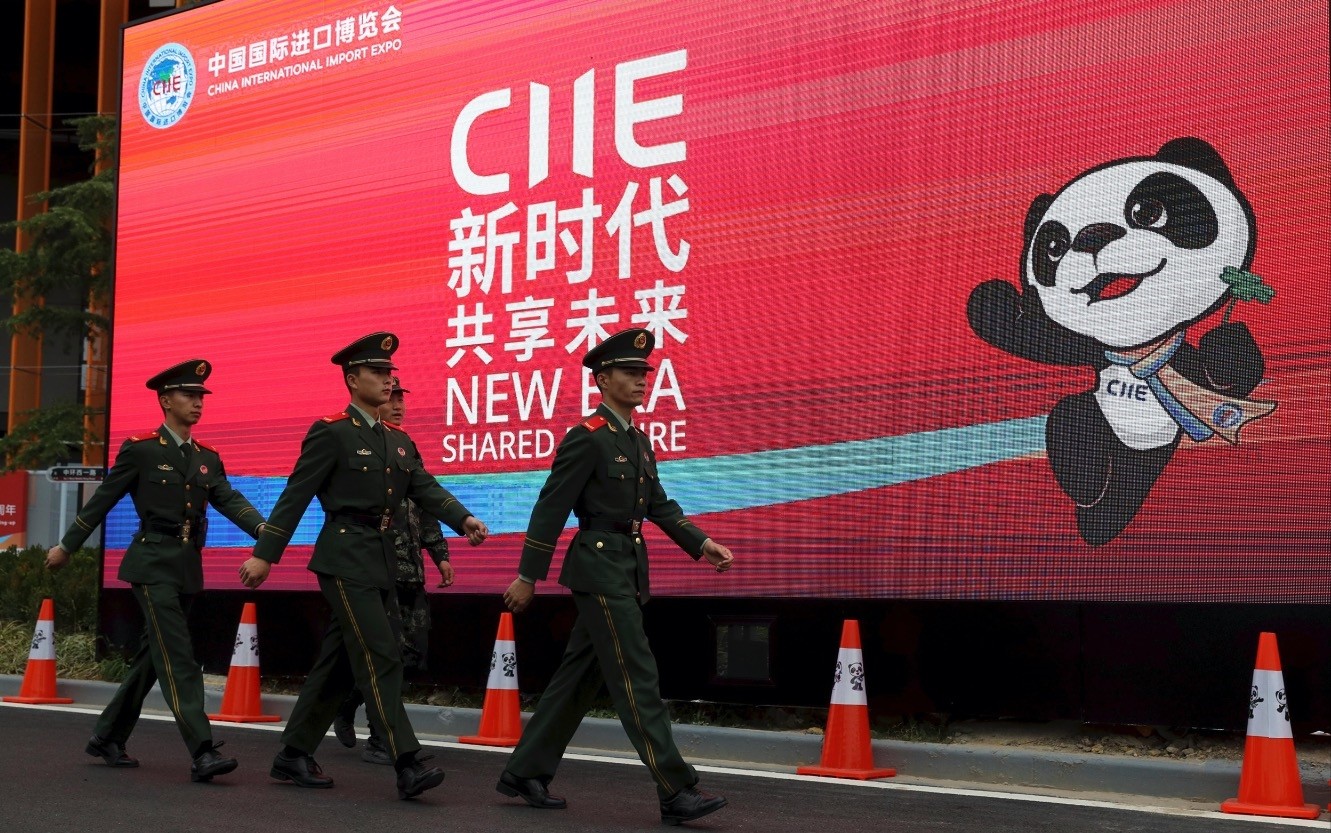 Paramilitary policemen march past a billboard for the China International Import Expo on the eve of its opening in Shanghai, Nov. 4.
by Associated Press Nov 05, 2018 12:00 am

Facing a blizzard of trade complaints, China is throwing an ‘open for business' import fair hosted by President Xi Jinping to rebrand itself as a welcoming market and positive global force

More than 3,000 companies from 130 countries selling everything from Egyptian dates to factory machinery are attending the China International Import Expo , opening today in the commercial hub of Shanghai. Its VIP guest list includes prime ministers and other leaders from Russia, Pakistan and Vietnam. The United States, fighting a tariff war with Beijing, has no plans to send a high-level envoy. Xi's government is emphasizing the promise of China's growing consumer market to help defuse complaints Beijing abuses the global trading system by reneging on promises to open its industries.

"This says, look, we're not a global parasite that is creating massive deficits, we are buying goods," said Kerry Brown, a Chinese politics specialist at King's College London. The event also is part of efforts to develop a trading network centered on China and increase its influence in a Western-dominated global system. President Donald Trump and his "American first" trade policies that threaten to raise import barriers to the world's biggest consumer market loom in the background.

Exporters, especially developing countries, want closer relations with China to help "insulate themselves from what is happening with Trump and the U.S.," said Gareth Leather of Capital Economics. China has cut tariffs and announced other measures this year to boost imports, which rose 15.9 percent in 2017 to $1.8 trillion. But none address the U.S. complaints about its technology policy that prompted Trump to impose penalty tariffs of up to 25 percent on $250 billion of Chinese imports. Beijing has responded with tariff hikes on $110 billion of American imports.

Chinese leaders have rejected pressure to roll back plans such as "Made in China 2025," which calls for state-led creation of global champions in robotics and other fields, ambitions that some American officials worry will undermine U.S. industrial leadership. To keep the economy growing, China needs to nurture its consumer market and that requires more imports. But foreign companies say regulators are still trying to squeeze them out of promising industries and that they face pressure to hand over technology.

The Shanghai expo "will be of little consequence to U.S. and other companies unless its pageantry is matched by meaningful and measurable changes in China trade practices," Kenneth Jarrett, president of the American Chamber of Commerce in Shanghai, said in an email. Some companies might get a brief sales boost, "but its long-run impact will be defined by China's willingness to end many of its unfair trade practices," said Jarrett.

Europe, Japan and other trading partners have been leery of Trump's tactics but echo U.S. complaints. They say Beijing improperly hampers access to finance, logistics and other service industries. European leaders are frustrated that Beijing bars foreign acquisitions of most assets while its own companies are on a global buying spree.

Writing in a Chinese business magazine, the French and German ambassadors to Beijing appealed for changes including an end to requirements that foreign companies operate in joint ventures with state-owned partners. They called for an overhaul of rules they say hinder companies from profiting from and protecting their technology.

"We encourage China to address these issues through concrete and systematic measures that go beyond tariff adjustments," Ambassadors Jean-Maurice Ripert of France and Clemens von Goetze of Germany wrote in the magazine Caixin.

The Shanghai expo also gives Beijing a chance to repair its image following complaints about its "Belt and Road" initiative to expand trade by building ports, railways and other infrastructure across a vast arc of 65 countries from the South Pacific through Asia to Africa and Europe. Governments including Nepal, Sri Lanka and Thailand have scrapped or scaled back projects due to high costs or complaints too little work goes to local companies. Sri Lanka, Kenya and other nations have run into trouble repaying Chinese loans.