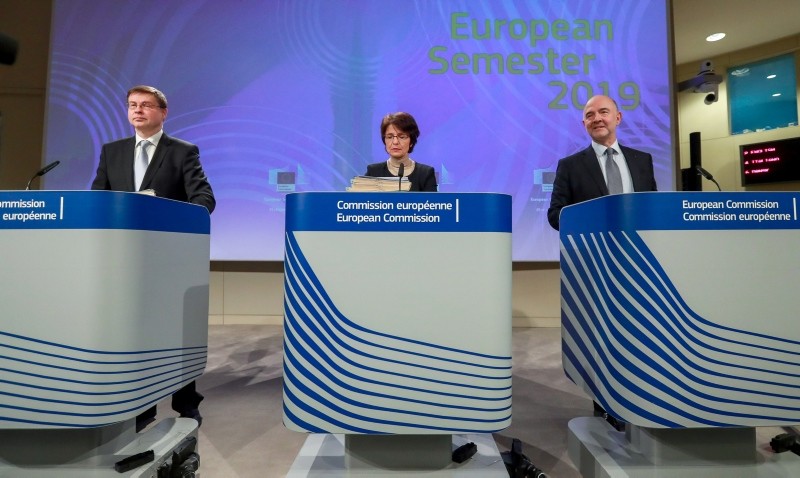 The European Commission warned Italy on Wednesday that its budget plans are in serious breach of the rules underpinning the euro single currency and that the country could face legal action.

The European Union's executive arm, which supervises national budget plans, has invited eurozone countries to examine its assessment in two weeks and, if they agree with it, the Commission would launch a so-called "excessive deficit procedure" against Italy.

"It is with regret that today we confirm our assessment that Italy's draft budget plan is in particularly serious non-compliance," EU Commission Vice-President Valdis Dombrovskis told reporters.

"With what the Italian government has put on the table, we see a risk of the country sleepwalking into instability," he said, adding that the Commission remains open to dialogue.

"We cannot see how perpetuating this vulnerability will increase economic serenity," he said. "Instead, I believe it could result in more austerity down the road."

The move ramps up tensions between the Commission and the populist government in Rome, which has refused to give up its spending plans, despite repeated warnings from Brussels.

Italy argues the spending is necessary to relaunch economic growth after years of austerity. It wants to boost social welfare programs that will benefit mostly young job seekers and restore pensions that had been slashed by a previous government.

The Commission's analysis says the measures will not boost growth but rather will necessitate new budget cuts in the future.

"This step which we take today is the logical and unavoidable consequence of the decision taken by Italy's authorities not to modify their fiscal targets," said EU Economy Commissioner Pierre Moscovici.

"Through the past months, the Commission's commitment to dialogue with Italy has been genuine. And it will always be genuine," he said. Eurozone and EU finance ministers meet in Brussels on Dec 3-4.

In Rome, Italian Deputy Prime Minister Matteo Salvini indicated that he would not back down on plans to roll-back on the unpopular pension reform, which would allow thousands to retire in the coming months.

"A letter arrived from Brussels? I was expecting one from Santa Claus," Salvini said. "We will discuss it politely as we always have. We will exchange opinions. I will continue. If someone wants to persuade me that the pension reform was right, I will not be persuaded."

"My mailbox is nearly full because of compulsive letter writers who spend their time writing little letters," he said.