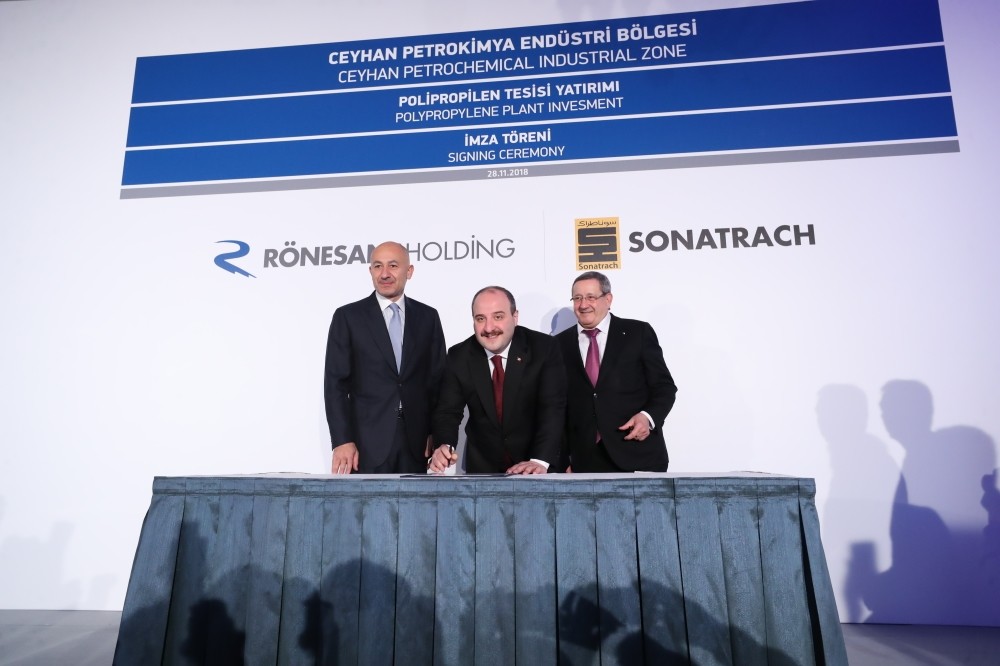 In an attempt to cut down petrochemicals imports, which make up almost 30 percent of Turkey's trade deficit, the country has launched a number of initiatives to boost local production. As part of the initiatives, Turkey will build a polypropylene manufacturing plant at the Ceyhan Petrochemical Industry Zone located in the Mediterranean province of Adana.

With an investment cost of $1.2 billion, the polypropylene production plant is a joint project of Turkey's Rönesans Holding and Bayegan and Algeria's state-owned energy and chemicals group Sonatrach.

In his speech at the signing ceremony, Varank stressed the project's importance and explained the opportunities it offers for the Turkish economy.

Turkey has the 14th largest chemical sector in the world. It makes up more than 6 percent of the country's gross domestic product (GDP). Last year, the sector's imports totaled to $38 billion, Varank said.

The petrochemicals sector alone yielded $13 billion in trade deficit. The figure corresponds to 30 percent of the total trade deficit caused by the manufacturing industry, the minister added.

"Imports of polypropylene and its derivatives causes the largest trade deficit in petrochemical imports. Turkey is largely dependent on imports to obtain raw materials for plastics, fiber and rubber. All these data prove the vital importance of petrochemical investments in order to sustain a production-based growth and reduce current account deficit to a great extent," the minister said.

As per the agreement the facility will have an annual production capacity of 450,000 tons. Algeria's Sonatrach will provide propane gas for 15 years to the facility.

The facility in Ceyhan will make up for at least 25 percent of Turkey's annual polypropylene imports of around 2.1 million tons, saving up to $2.2 billion.

Turkey's annual consumption of polypropylene constitutes 3 to 4 percent of global consumption. The new investment will reduce the current account deficit by some $400 to $500 million.

"This integrated facility, with an investment value of $1.2 billion, will directly create 2,000 jobs. With construction beginning next year, the facility will start production in 2023," Varank said and continued, "This project sets an example as it demonstrates the confidence in our economy and offers unprecedented opportunities."

The minister said the government has developed a stable and predictable investment ecosystem where the conditions for doing business were made easy. "Our main goal," Varank said, "is to make our country a global center of attraction with productive investments."

The government prioritizes providing consultative support for investors, offering solutions for their problems and expanding international collaborations, he added. He said negotiations with foreign and local companies for the petrochemical plant in Ceyhan Petrochemical Industry Zone, specifically designed for the energy sector, continue at full speed.

"The factories in Ceyhan Industry Zone will manufacture the most essential raw materials for the plastics and rubber sector. These steps will reduce dependency on imports and improve domestic production capacity," Varank said.

The Ceyhan Petrochemical Industry Zone will be established on a 1,341-hectare area and is strategically located as it neighbors pipelines, thermal plants and the Yumurtalık Free Zone.

"This zone has the potential to become Turkey's new energy hub given its proximity to Mersin Port, Adana Airport and to other railways," he said.

Varank added that the Ceyhan Petrochemical Industry Zone will create 10,000 jobs. Once the zone is fully operational, its factories will produce 80 percent of the imported chemical goods while making a 2 to 4 percent contribution to Turkey's annual growth.