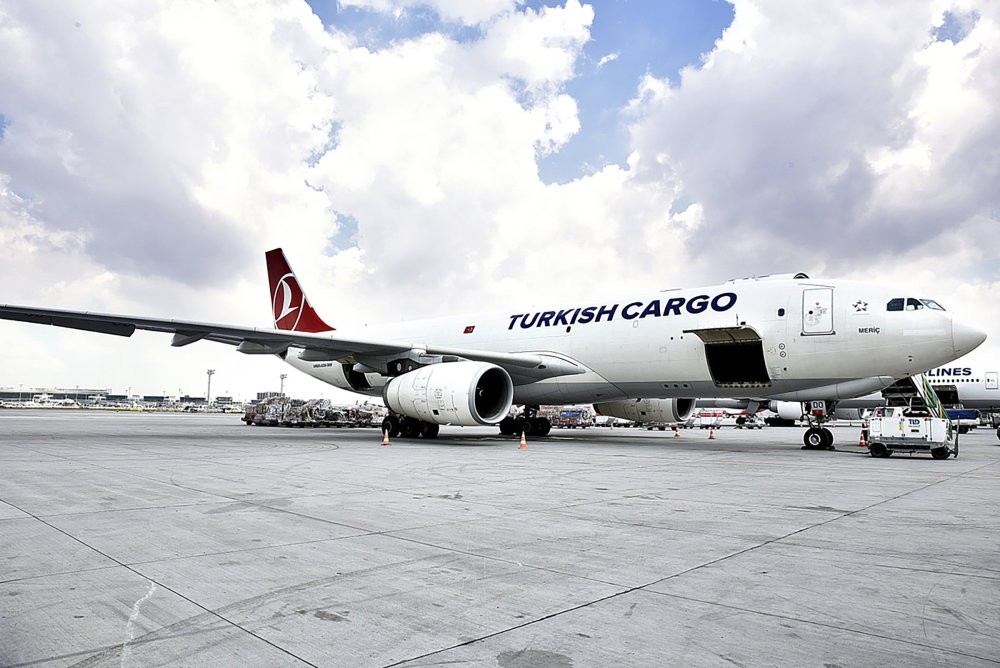 One of the fastest growing air cargo companies in the world Turkish Cargo increased its revenues by 29 percent during the January-September period.
by Daily Sabah Dec 07, 2018 12:00 am

Turkey's air cargo operations grew by 10.2 percent in the first nine months of the year, five times more than the global average in that period, according to the Netherlands-based World Air Cargo Data (WACD).

The improved performance comes at a time when the global average fell to a five-year low of 2.8 percent, mostly due to the decline in air cargo from China to the U.S.

Turkish Cargo, one of the fastest growing air cargo companies in the world, increased its revenues by 29 percent during the January-September period. The volume of freight it carries around the world also rose by 25 percent.

Established in 2004 as a subsidiary of Turkey's flag carrier Turkish Airlines, it is now one of the fastest growing air cargo companies in the world, providing service to 122 countries and delivering goods to more than 300 destinations. Thanks to this outstanding performance, Turkish Cargo retained eighth place on the WACD list of biggest global air cargo service providers.

The firm looks to become the fastest growing air cargo brand in the world and rank among the top five air cargo carriers. Thus, it plans to increase capacity to 2 million tons of freight by operations based at Istanbul Airport. By 2023, Turkish Cargo aims to boost its freight carrying capacity to 4 million and become one of the top three freight carriers in the world.

The Turkish air cargo sector aims to record higher performance with the opening of Istanbul Airport, which was inaugurated on Oct. 29. Prominent global shipping giants like United Postal Service (UPS), DHL and FedEx have all submitted bids to lease areas at Istanbul's new airport and global automotive and technology firms are reportedly looking for warehouses at the airport to export products from this new aviation hub offering a 5.5 million tons of cargo capacity.

While Istanbul's Atatürk Airport has a capacity for nine airplanes on a 250,000 square meter cargo terminal, the Istanbul Airport has a 1.4-million-square-meter cargo city that can accommodate up to 29 planes. According to a report in the Turkish daily, Dünya, a Far Eastern mobile phone producer that plans to enter the Turkish market is in talks with Turkish logistics firm Fevzi Gandur Lojistik to operate at Istanbul Airport.

The Turkish logistics firm has a 2,700-square-meter warehouse at Istanbul Airport. The company, which ranked 127th on the International Air Transport Association (IATA) list, has jumped to 60th in a very short time.

in passenger transportThe European Organization for the Safety of Air Navigation (EUROCONTROL) has published its third-quarter report. The report includes European aviation data on airline companies that have increased their flights the most, recorded the highest number of passenger increases and highest expansion in traffic for January through September.

Turkey ranked first, among the five countries that made the highest contribution to European aviation, with an additional 192 flights per day, according to EUROCONTROL.

Turkey's air traffic rose 8.4 percent from April 1 to Sep. 30 - during the second and third quarter - compared with the same period last year.

Meanwhile, Turkey's Antalya Airport came second, after Frankfurt Airport, among airports that added the highest number of flights to the network.

According to the report, delays in air traffic flow management in Turkey were at 79 percent in the second and third quarter of 2017. It dropped by 47.3 percent in the same period this year. The percentage of delayed flights - delayed by more than 15 minutes - in Istanbul's Atatürk Airport was 25 percent and 21 percent in Istanbul's Sabiha Gökçen Airport, in the same period while the average in Europe was 28 percent.