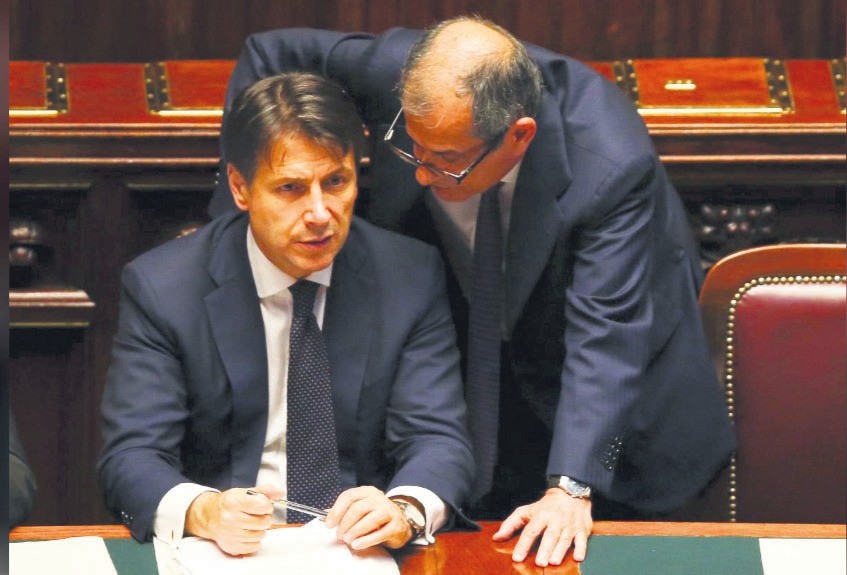 Italian Prime Minister Giuseppe Conte talks with Economy Minister Giovanni Tria during his first session at the Lower House of the Parliament in Rome, Italy, June 6.
by Dec 12, 2018 12:00 am

Amid Italy's dispute with the EU over its deficit target for next year, neither of Italy's coalition parties want to make any major changes

The European Commission has rejected Rome's budget, which predicts the deficit will rise to 2.4 percent of gross domestic product in 2019 from 1.8 percent this year, saying it will not cut Italy's large public debt as the rules require.

The source told Reuters there were "excellent chances" that the Commission would back down from a threat to discipline Rome if the target was cut to 2.0 percent.

However, the source said neither of the two coalition parties - the rightist League and the anti-establishment 5-Star Movement - wanted to see the target drop below 2.2 percent.

Underscoring tensions within the government, Economy Minister Giovanni Tria said it would be better to reach a deal with Brussels and cut the deficit in order to regain market trust.

The clash with the EU, whose fiscal rules are designed to protect the euro zone from a sovereign debt crisis, is worrying investors and has sent Italy's borrowing costs surging and shares its banks tumbling.

Tria, an economics professor with no party affiliation, pressed earlier this year for a deficit target of under 2.0 percent. He has been pushed aside in the negotiations with Brussels, which are being led directly by Prime Minister Giuseppe Conte.

Conte is due to see Commission President Jean-Claude Juncker today in an attempt to find a compromise. A separate government source said it was unlikely that he would put forward any deficit target at that meeting.

Earlier, Conte told parliament he was confident he could reach an accord with Brussels, but said Europe had to overcome its "short-sighted" vision of fiscal rigour.

"I will not go to Brussels with a book of dreams. I will go with a complete spectrum of the reform programme," he said.

He added that increasing the budget deficit was needed to implement policies that Italians wanted and his coalition was not doing it "lightheartedly".

Among the most costly measures in the budget are income support for Italy's many poor and unemployed, and a reduction in retirement age for people who have paid at least 38 years of pension contributions.

Tria said he was expecting new financial forecasts costing these two measures to be finalized later yesterday, giving coalition parties the data they need to decide on the deficit.

While keen to avoid EU censure, the ruling parties feel emboldened by the weeks of unrest in France.

President Emmanuel Macron on Monday announced wage rises for the poorest workers and tax cuts for pensioners - concessions that risk shunting the French 2019 deficit through the EU's 3 percent ceiling.

"Seeing what is going on in Paris, I refuse to believe that Brussels, for the sake of a few decimal places, will impose sanctions, inspectors and commissars," Italian Deputy Prime Minister Matteo Salvini said on Sunday.