Phantom of a crisis: 'Yellow vest' protests in France rooted in 2008 meltdown with bells tolling for Europeans 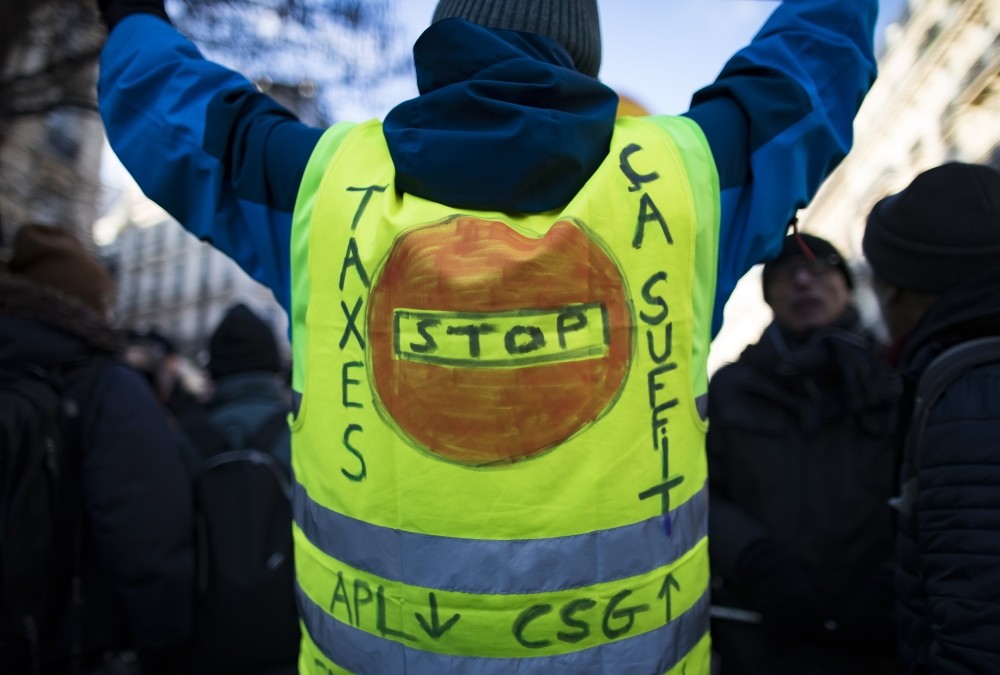 A yellow vest bears the message u2018Stop Taxesu2019 as high school students and union workers take part in a demonstration for pensions and social conditions, Paris, France, Friday.
by Elif Erşen Dec 15, 2018 12:00 am

It is not the first time that the French have witnessed the use of an item of cloth as representative power demonstrating the difference between those who have and those who do not.

Approximately 230 years ago in the late 18th century, lower classes of French society – called the "sans-culottes" because they wore trousers, not silk culottes like the nobility – played a significant role in driving the French Revolution as they protested the poor quality of life under the Ancien Regime.

Wearing yellow vests costing $6.99, the 21st-century edition of the sans-culottes began taking their grievances to the streets on Nov. 17 in various French provinces, initially concentrating in rural and peripheral urban areas. The demonstrations were primarily ignited by the tax hikes on fuel, the price of which has already seen increases in the past year due to rising oil prices. 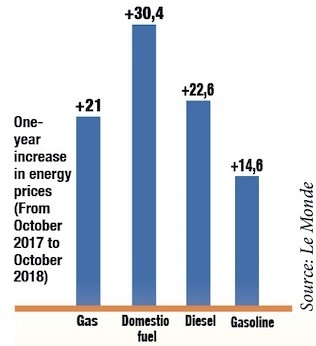 The "gilles jaunes" or yellow vest is indeed a legal requirement imposed by a 2008 law, obligating all French motorists to keep a yellow vest in their vehicles due to its high visibility. It has become the embodiment of the mounting frustration, rage and disenchantment of French society that has accrued over the years because of rising taxes, decreasing purchasing power and growing social and economic inequality when the protesters wore during the first roadblocks.

Succumbing to the pressures of the demonstrators, French President Emmanuel Macron and Prime Minister Edouard Philippe scrapped the fuel taxes and the protesters are preparing for a fifth round of demonstrations this weekend.

The yellow vest protests are no exception to that historical phenomenon. In this particular context, it was not only the fuel taxes that triggered the revolts, but it was the final straw breaking the camel's back. In 2017, Macron abolished the wealth tax which had been levied on only the top 0.9 percent of French society and lowered taxes on the richest companies and individuals. On top of that, repetitive rejections of any proposal asking for raises in minimum wage and freezing retirement benefits – two main agendas of the protests – have mainstreamed the idea that Macron is the president of the rich as people are finding him more and more arrogant.

"The yellow vest protests are the French manifestation of a global anger spread throughout Western societies against liberal economy, offshoring of national factories, deindustrialization, deteriorating living standards, deteriorating welfare state, poor economic growth, binding European institutions and immigration. While in other countries this 'anger' takes shape in far-right, populist or illiberal votes, it takes form in popular riots, protests and blockage in France. People in the streets demands for a stronger national state able to regulate finance and economy in a more just way," Leonard Faytre, a research assistant in European Studies at the Foundation for Political, Economic and Social Research (SETA), told Daily Sabah in an exclusive interview.

In due consideration of the current developments across European countries, limiting the social, political and economic restlessness to France would be a short-sighted approach, ignoring the worldwide anger nurtured by deteriorating living standards and welfare along with melting purchasing power. 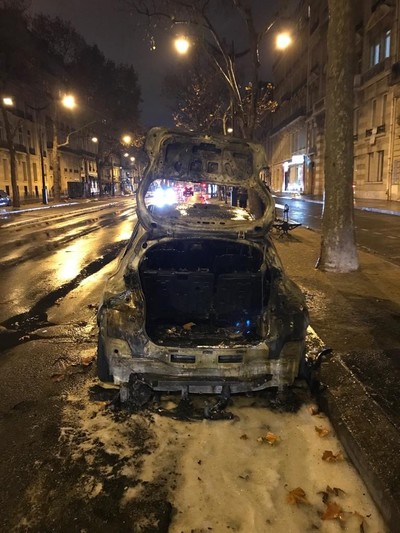 Defined by universal standards of welfare and democracy, many European powers had enjoyed expansive accumulation of wealth until the financial meltdown of 2008, which was a major blow to the growth motivation of European economies like Portugal, Greece, Italy, Spain and France. 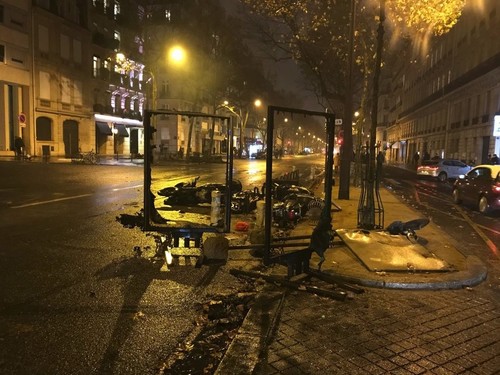 "Spending borrowed money from U.S.-based banks with no regulated and controlled budgetary discipline, European countries, initially Greece, Portugal and the Greek Cypriot Administration, were hit hard by budget deficits," Cüney Paksoy, a leading Turkish strategist and Anadolu Agency (AA) Finance Analyst, told Daily Sabah. He particularly drew attention to the lack of an auditing mechanism for budget control over how countries spent the money they borrowed.

Faced with the challenges posed by the inability to grow and creating inflation, European economies relied on the European Central Bank's (ECB) bond-buying program following the 2008 crisis – which again has not helped the continental economies roll over real sector debt, Paksoy said.

With the nearing end of the quantitative easing era of the ECB, questions asking "What's going to happen now and who is going the buy the bonds?" prevail the conversations on the future of the European finance.

On Thursday, the ECB confirmed that it would end the quantitative easing program by the end of this month. The bond buying scheme has been an important stimulus for the struggling economies in the post-2008 era.

Moreover, the bank also lowered its 2018 forecast for gross domestic product growth in the eurozone by 0.1 percent to 1.9 percent and shaved its 2020 forecast by a similar amount to 1.7 percent.

In brief, if there is a ghost haunting Europe, it is the phantom of the 2008 financial crisis. 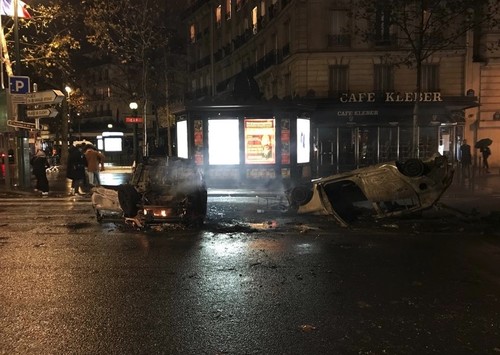 Until now, Paksoy said, European people, and mostly the middle and lower classes have been the ones paying the bill for the mounting problem of debt and budget deficit. "The lower and middle classes have been economically oppressed particularly in France but this not unique to the country of social revolts, it has the potential to be contagion for the whole of Europe."

In addition to Belgium, Hungary, the Netherlands, Brexit protesters with their yellow vests on swarmed Westminster Bridge in London Friday; and this went beyond the continent over to the Israeli capital Tel Aviv where hundreds of people wearing yellow vests demonstrated against the high cost of living.

A Turkish diplomatic source speaking to Daily Sabah emphasized that the rage which burst out with the yellow vest protests exposes the economic and social problems that have taken sway over the country in the last two decades.

"The French governments in the last two decades have failed to devise policies that will boost the country's economic competitiveness, expand technology investments, and reduce inflation," the source cited as the roots of social unrest in the European country.

France is one of the leading countries that has enjoyed the concept of social welfare, but with diminishing resources to finance the welfare state, the governments resorted to more borrowing. 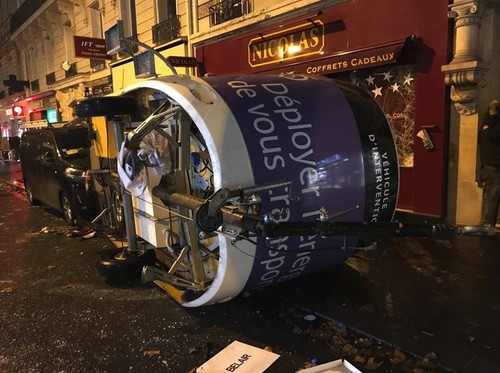 In order to change this outlook, the Macron government rolled up its sleeves with labor and tax reforms. But at every initiative, it found rejection fueled by growing anger – a sign of governmental failure of correctly assessing the intricate relation of the economic and the social, the diplomatic source remarked. 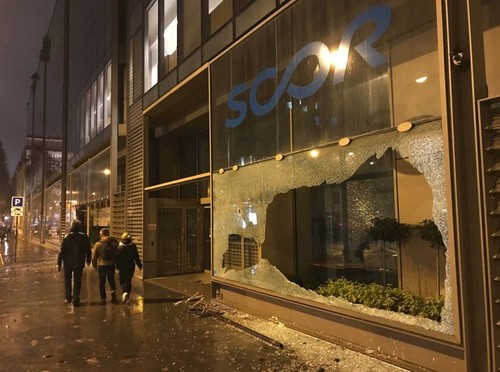 While Macron took the job as the French knight in shining armor set to save Europe and revive the idea of a grand and unified continent, he ended up being the epicenter of a shattering European ideal.

Carefully observing and analyzing the turn of events in France and in Europe particularly, Turkey attaches great importance to its relations with the countries on the continent.

France's Finance Minister Bruno Le Maire highlighted last week that the protests are a catastrophe for the French economy. "We must expect a new slowdown of economic growth at year-end due to the yellow vest protests," Le Maire said, adding that the marches would have a "severe impact" on the economy. The central bank forecast the protests would knock fourth quarter growth down to 0.2 percent from 0.4 percent in a previous estimate.

In a quarterly update of its economic forecasts, the Bank of France projected the economy would grow 1.5 percent in 2018 and 2019, down from 1.6 percent for both years in previous estimates. But the forecasts do not include 10 billion euros in tax cuts brought forward to next year and extra spending announced this week by Macron in a major concession to protesters.

The long-established ties between Turkey and France date back to the 15th century and their rapport has been largely supported by a robust economic exchange.

According to the data of the Industry and Technology Ministry, around 1,500 French companies operate in Turkey's energy, infrastructure, cosmetics, food and finance sectors. The amount of foreign direct investment Turkey attracted from France in the last 16 years totaled $7.1 billion.

The bilateral trade volume between the two countries was recorded at $14.7 billion in 2017 and in the period of January to November, Turkey's exports to the country stood at $6.6 billion with a 12.9 percent rise compared to the same period of last year.

Since France and other European countries are important partners for Turkey, the country considers the economic and social stability across the continent vital for the future of relations and significant for the broader region.

In case the snowballing economic and social problems on the continent may lead to any dislocation and discontinuity, the consequences will lead to the emergence of more radical outbursts and a more radical design of the political order, Cünet Paksoy explained. This, in return, will definitely feed growing global terrorism, against which Turkey has been warning its European allies on every possible occasion.

Any social and economic instability will further exacerbate xenophobia, targeting refugees in European countries, Paksoy added. These threats will then create immense problems for Turkey on the border of Europe, home to more than 4.5 million refugees.

The Turkish diplomatic source also drew attention to the threats of instability in Europe toward Turkish citizens. "We have been observing that xenophobia is increasingly gaining ground in Europe and Turkey will be affected most by these perils because around 5-6 million Turkish citizens live in European countries, mostly in Germany and France."