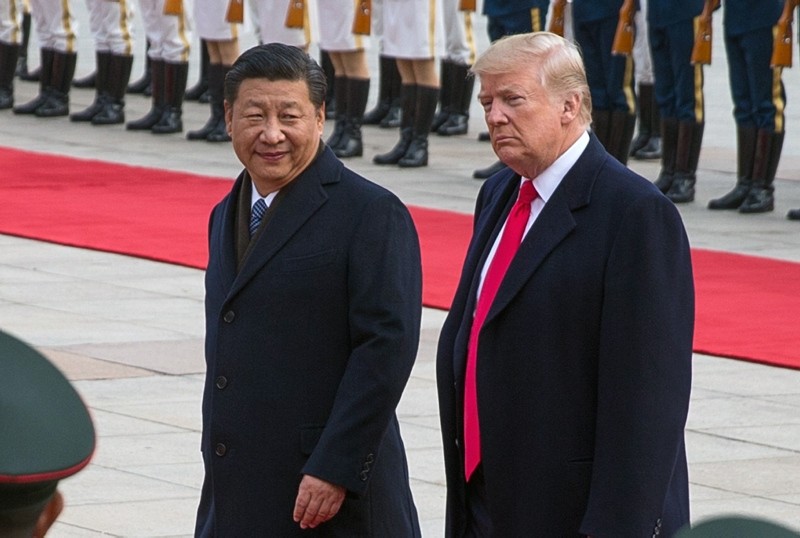 U.S. President Donald Trump said on Twitter that he had a "long and very good call" with Chinese President Xi Jinping and that a possible trade deal between the United States and China was progressing well.

As a partial shutdown of the U.S. government entered its eighth day, with no quick end in sight, the Republican president was in Washington, sending out tweets attacking Democrats and talking up possibly improved relations with China.

The two nations have been in a trade war for much of 2018, shaking world financial markets as the flow of hundreds of billions of dollars' worth of goods between the world's two largest economies has been disrupted by tariffs.

Trump and Xi agreed to a ceasefire in the trade war, deciding to hold off on imposing more tariffs for 90 days starting Dec. 1 while they negotiate a deal to end the dispute following months of escalating tensions.

"Just had a long and very good call with President Xi of China," Trump wrote on Saturday. "Deal is moving along very well. If made, it will be very comprehensive, covering all subjects, areas and points of dispute. Big progress being made!"

Chinese state media also said Xi and Trump spoke on Saturday, and quoted Xi as saying that teams from both countries have been working to implement a consensus reached with Trump.

"I hope that the two teams will meet each other half way, work hard, and strive to reach an agreement that is mutually beneficial and beneficial to the world as soon as possible," Xi said, according to the state-run Xinhua news agency.

China's foreign ministry said on Sunday the two countries' relationship had endured storms before, but that strong ties were important for the economies of both nations and for ensuring global stability and peace.

"Both sides should stick to rationally and objectively viewing the other side's strategic intentions, strengthen strategic communication and promote strategic mutual trust to prevent strategic misjudgments," he said in a statement.

The US-China trade war has been among factors pressuring U.S. and global markets in December, alongside worries over slowing growth, a partial U.S. government shutdown, higher U.S. Federal Reserve interest rates and Trump's attacks on the central bank.

Treasury Secretary Steven Mnuchin last Sunday aimed to allay investor anxiety by announcing that he had held a conference call with major bank CEOs, but the comments were widely criticized by market watchers for raising new doubts.

Prior to Saturday's call, there had been small signs of progress and the absence of new threats from Trump.

China is also targeting intellectual property theft in the country – one of the main sticking points in the dispute with the U.S.

Trump initiated the trade war because of complaints over unfair Chinese trade practices – concerns shared by the European Union, Japan and others.

Trump is seeking a massive reduction in the U.S. trade deficit with China and deeper reforms to open the economy to foreign companies.

Trade negotiators from China and the United States are planning to meet in January for talks, Beijing said on Thursday, but stopped short of confirming the exact date or location.

These would be the first face-to-face talks since the truce was agreed by both nation's leaders on the sidelines of the G20 summit meeting in Buenos Aires.

Last Sunday, Beijing's commerce ministry said China and the U.S. "made new progress" on the issues of trade balance and intellectual property during a phone call between officials from the two countries.

Resolving the bruising spat could help shore up confidence in the Chinese economy, which itself is bracing for a slowdown.

Having canceled his plans to travel to his estate in Florida for the holidays because of the government shutdown that started on Dec. 22, Trump tweeted, "I am in the White House waiting for the Democrats to come on over and make a deal."

The Republican-controlled Congress was closed for the weekend and few lawmakers were in the capital.

The shutdown, affecting about one-quarter of the federal government including 800,000 or so workers, began when funding for several agencies expired.

Congress must pass legislation to restore that funding, but has not done so due to a dispute over Trump's demand that the bill include $5 billion in taxpayer money to help pay for a wall he wants to build along the U.S.-Mexico border.

The wall was a major 2016 campaign promise of Trump's, who promised then that it would be paid for by Mexico, which has steadfastly refused to do so. Trump has since demanded that U.S. taxpayers pay for it at an estimated total cost of $23 billion.

He sees the wall as vital to stemming illegal immigration, while Democrats and some Republicans see it as an impractical and costly project. The standoff over Trump's demand for funding will be a test for Congress when it returns next week.

Trump tweeted on Saturday that the deaths of two migrant children this month who had been taken into U.S. custody after trying to cross the southern border were "strictly the fault of the Democrats and their pathetic immigration policies."

It was unclear exactly which policies Trump was referring to, but his aides have referred to U.S. laws and court rulings - including laws passed with bipartisan support - that govern the conditions under which children and families can be detained as "loopholes" that encourage illegal immigration.

On Friday, Secretary of Homeland Security Kirstjen Nielsen visited Border Patrol stations in Texas after her agency instituted expanded medical checks of migrant children following the two deaths. She is also due to visit Yuma, Arizona, the Department of Homeland Security said in a statement on Saturday.

In the interim, thousands of employees of federal agencies such as the Homeland Security, Justice, Commerce, Interior, Transportation, Agriculture and other departments were staying at home on furlough or soon to be working without pay.

For instance, members of the U.S. Coast Guard will receive their final paychecks of the year on Monday, the service said in a statement on its website on Friday after previously warning that payments would be delayed due to the shutdown.

"The administration, the Department of Homeland Security and the Coast Guard have identified a way to pay our military workforce on Dec. 31, 2018," the service website read.

That paycheck will be their last until the government reopens.

The Federal Emergency Management Agency also said on Friday that it would resume issuing new flood insurance policies during the shutdown, reversing an earlier decision.