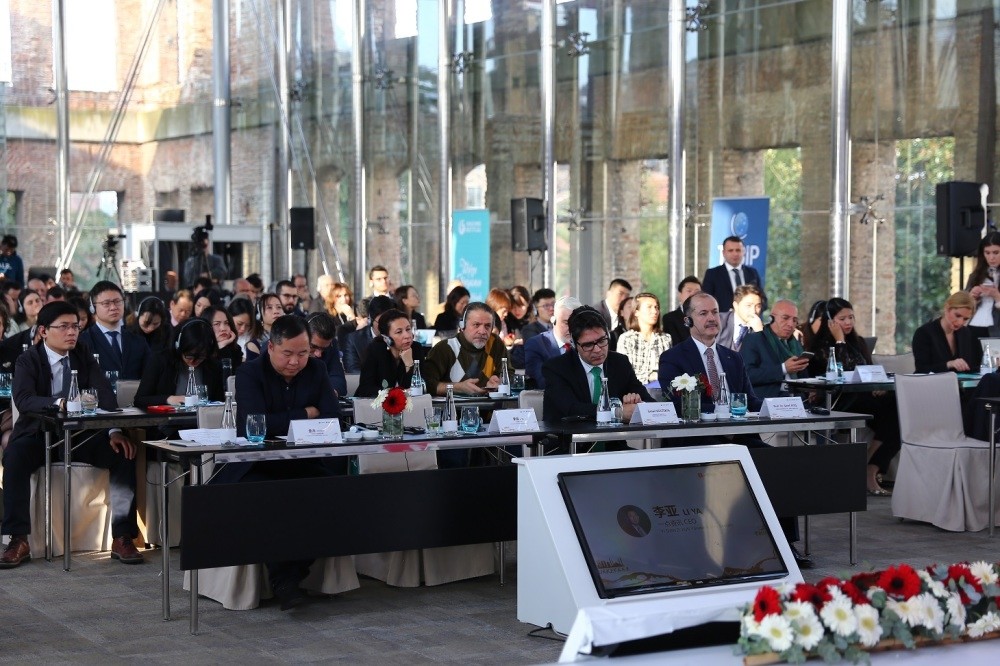 Representatives of more than 70 brands, which are driving the Chinese economy with a sales volume of $500 billion in the past year and with a market capitalization over $1 trillion, met together at an event hosted by the Yunus Emre Institute (YEE) on Tuesday. China's largest airline, Air China, the world's largest dairy producer, YILI, the largest Chinese social media platform, YIDIAN, the world's leading computer company, Lenovo, China's luxury car brand, Infinity, the world's second-largest computer company, HP, the world's largest chip manufacturer, Qualcomm Wireless Communication, and many other renowned global companies met influential Turkish companies at the conference One Belt, One Road – We Shall Shape The Future Together.

Beside its experience in diplomacy and activities in public and cultural events to introduce Turkey to the outer world, the YEE also conducts activities to promote Turkey's economic, scientific, academic and technological capacity and the opportunities that the country offers. The One Belt, One Road - We Shall Shape The Future Together conference was organized by the YEE's newly founded Academic and Scientific Cooperation Project of Turkey (TABIP), which operates under the auspices of the Presidency of the Republic of Turkey.

The conference, which was held at the Esma Sultan Mansion in Istanbul, brought high-level representatives, executives and investors with significant segments of the growing Chinese economy.

The YEE is strengthening Turkey's academic and scientific network with its comprehensive portal and global and national cooperation developed within TABIP. While the institute offers its current capabilities and global network services to all national institutions and organizations and the corporate sector in Turkey, it also contributes to the transfer of qualified human resources of Turkey with TABIP.

Besides for the economic significance of the event, the conference intends to increase Turkish-Chinese cultural, academic and scientific interactions and strengthen the economic, commercial and technological cooperation capacity. Increasing the already large number of Chinese tourists visiting Turkey and expanding the business and investment volumes in different sectors were among the discussed topics at the event.

2018: Year of Turkey Tourism in China

Within the scope of 2018: Year of Turkey Tourism in China, the Yunus Emre Institute took cultural and scientific diplomacy steps in the country and offered Chinese tourists various destinations in Turkey. The institute has not only worked toward inviting individuals, but groups of representatives from the media to the business world, members of civil society and cultural foundations. The institute has also left its mark on Chinese social media with its work in the Chinese digital world in collaboration with Yidian Zixun, a leading interest-oriented mobile news aggregator in China with 580 million users.

Professor Şeref Ateş, the president of the institute, said the YEE promotes Turkish language, culture, academic and scientific capacity with its 56 cultural centers in 43 countries and 139 contact points in more than 60 countries. Commenting on the Year of Turkey Tourism celebrated in China last year, he said the institute has conducted many activities to promote Turkish culture and history, the academic and scientific richness of Turkey and its trade capacity and to strengthen the positive perception of Turkey in China.

Ateş added: "Opinion leaders, journalists and artists, who have been invited to our country as part of the Be Our Guest Project, now work voluntarily to bolster ties between the two countries and increase the number of commercial, cultural and artistic activities in both countries. The results of the promotion campaigns show visible effects this year. The number of Chinese tourists arriving in Turkey has increased by 97 percent in the first half, compared to the previous year. We also believe that we will reach our goal of 1 million Chinese tourists in a short time with our cultural diplomacy. We are also keen to improve the interaction between the academic and scientific communities."

YIDIAN CEO Li Ya drew attention to Turkey's national flag carrier Turkish Airlines (THY) and its unique and wide flight network in the world. Li also drew attention to the exclusive geographical location of Turkey at the junction of the Eurasia, Europe and African continents.

Expansion of cultural and tourism dialogue between Turkey and China would certainly create new business opportunities, he said.

Foreign Economic Relations Board Turkey-China Business Council Chairman Murat Kolbaşı stressed that the global economic axis has been moving from the West to the East in his speech at a panel at the event.

Kolbaşı pointed to the $25 billion bilateral trade volume between Turkey and China and said, "The two countries have an ancient history of bilateral ties, and there is a potential to accomplish great cooperation." He added that more than 1,000 Chinese countries operate in Turkey.

Speaking on tourism relations, Kolbaşı highlighted the small share Turkey gets from the Chinese market. Approximately 130 million Chinese tourists travel around the world every year, and only about 400,000 of them visited Turkey last year. The number of Chinese visitors in 2018 accounted for nearly 1 percent of the number of tourists visiting Turkey in 2018.

The DEİK Turkey-China Business Council head also underscored the necessity for the top 10 Turkish brands to expand their shares in Chinese and Asia-Pacific markets.