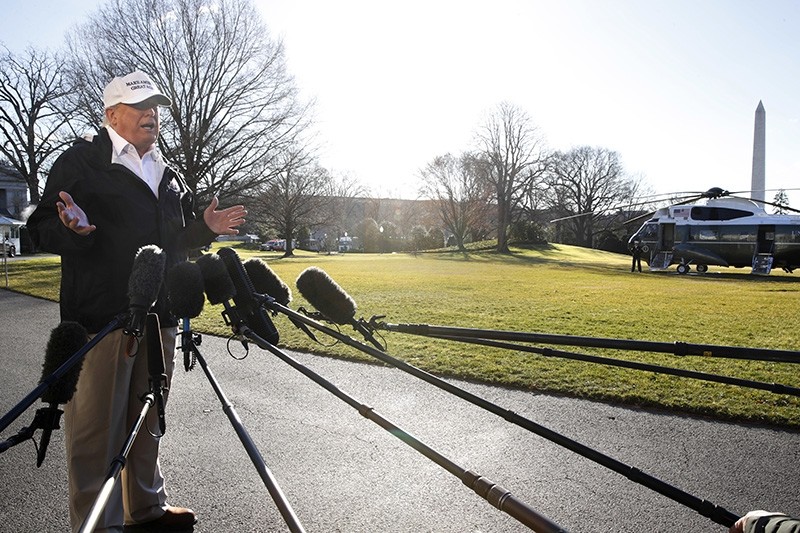 President Donald Trump speaks to the media as he leaves the White House, Thursday Jan. 10, 2019, in Washington, en route for a trip to the border in Texas as the government shutdown continues. (AP Photo)
by Compiled from Wire Services Jan 10, 2019 12:00 am

U.S. President Donald Trump said he is canceling his trip to Davos, Switzerland because of the partial government shutdown, now in its 20th day.

He was scheduled to leave Jan. 21 to attend the World Economic Forum. Trump said he's canceling his trip because of Democrats' "intransigence" on border security. Trump and Democrats are at an impasse over funding for Trump's proposed wall at the southern border.

In a tweet Friday, Trump offered his "warmest regards and apologies" to the economic forum.

Earlier in the day, he told reporters that he wanted to go, but that he might not if the shutdown over funding for a U.S.-Mexico border wall continues.

"I intended to go and speak in front of the world financial community in Davos. That's still on, but if the shutdown continues ... I won't go. I had planned to go, it's been very successful when I went. We have a great story to tell," Trump told reporters before leaving the White House to visit Texas.

Treasury Secretary Steven Mnuchin and other Cabinet members are still scheduled to attend the annual Davos event, which attracts business and political elite.

The partial government shutdown, now in its 20th day, could end by the meeting's Jan. 22 start date. The meeting concludes on Jan. 25.

China's Vice President Wang Qishan is also expected to attend, but it is not clear if there are any arrangements for a meeting between him and Trump during the annual gathering. China and the United States have taken a 90-day pause in implementing tariffs to hammer out a trade deal.

The Swiss meeting could also provide Trump with opportunities to discuss better terms of trade with the European Union, Japan, Canada and Mexico.

Last year, a brief government shutdown threatened to derail his trip to Davos, where he asserted that his "America First" agenda can go hand-in-hand with global cooperation.

Treasury Secretary Steven Mnuchin is leading the U.S. delegation to the annual Davos event, which courts high-profile businesspeople and political figures and other elites. Other members of the Cabinet are scheduled to attend as well as Trump's daughter Ivanka Trump and son-in-law, Jared Kushner.