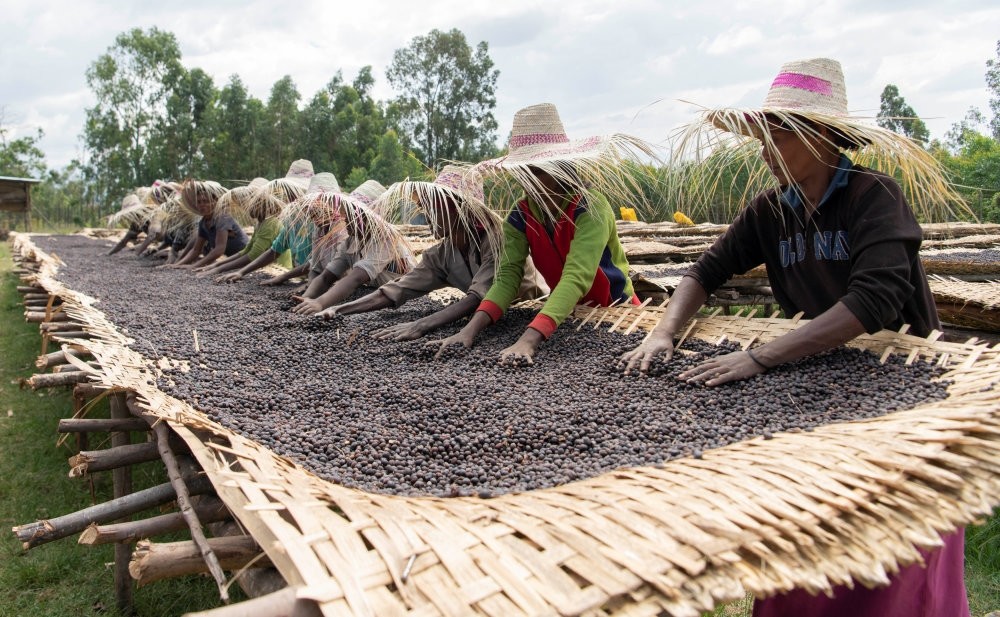 A crisis is brewing as global coffee prices have slumped to their lowest in nearly 13 years, struggling farmers are warning of a growing social catastrophe and there are calls for more value to be added in producing countries

In the verdant southern highlands of Ethiopia, coffee farmer Gafeto Gardo is thinking about calling time on an industry that has sustained families for generations.

Over the past year, the amount Gafeto gets for a kilogram of coffee beans has fallen a third to 8 birr, or just 29 cents, reducing his income from a cappuccino sold in the West for $3 to $4 to under a cent.

"We are now losing hope. We are not reaping as much as we should and I am worried this will have a huge impact," said Gafeto, flanked by laborers laying coffee cherries on jute mats in the rolling hills of Ethiopia's Shebedino district. "Coffee is our life here."

Unlike producers of commodities such as oil and natural gas, coffee farmers have long suffered from being at the wrong end of the value chain - receiving only a small fraction of the retail price of their crop.

Now, a slump in global coffee prices to their lowest in nearly 13 years in September is raising questions about whether it's worth growing beans at all in some of the traditional coffee heartlands of Central America, Colombia and Ethiopia.

"It is labour intensive and costly. They were struggling as things were before, let alone now prices have gone down. We fear they could abandon the crop en masse," said Desalegn Demissie, head of the Shebedino cooperative development office.

But at the other end of the chain, coffee has never been hotter. Millennials in the West who grew up with Starbucks drink lots and have fuelled a proliferation of coffee shops and pricey innovations from cold brew to nitrogen coffee.

The industry has also seen a wave of acquisitions as companies such as Nestle, JAB Holding and Coca-Cola spend billions to boost their market share.

For struggling farmers, though, times are tough. Growers around the world have warned coffee company executives in the West of a growing "social catastrophe", unless they can help to raise farmers' incomes.

In a letter last year to chief executives at companies such as Starbucks, Jacobs Douwe Egberts (JDE) and Nestle, a group representing growers in more than 30 countries said there was a risk farms would be abandoned, fuelling social and political unrest as well as more illegal migration.

Some companies are responding. Starbucks, for example, has committed $20 million to help smallholders they do business with in Central America until coffee prices rise above their cost of production.

"For us that is an initial step, acknowledging we need to do something helpful in the near term in the countries that need it most," said Michelle Burns, head of coffee at Starbucks, which buys about 3 percent of the world's coffee.

The main factor behind the latest slide in prices was a bumper coffee crop in Brazil, by far the world's biggest producer. The Brazilian harvest hit the price of arabica beans traded in New York at the ICE Futures U.S. Exchange. On Sept. 18, a kilogram of arabica fell to just 95.10 cents a lb, or $2.09 per kg, a level not seen since December 2005 and less than a third of the peak in 2011. Four months later, the price is still hovering around a dollar a lb.

For Gafeto and the 4,500 other farmers in the cooperative he helped establish in Ethiopia, the fluctuations in financial markets in New York quickly feed through to prices at home.

The internal market in Ethiopia is largely determined by daily auctions run by the Ethiopian Commodity Exchange but prices correlate closely with trends in global futures markets.

One problem for Ethiopian farmers is that most of their coffee is exported in bulk as green, unroasted beans, with most of the processes that add the greatest value taking place afterwards in the countries that consume the coffee.

"There hasn't been a really significant change in how coffee has been transported, purchased or produced in many decades. It has always just been extracted from the country," said Rob Terenzi, co-founder of Vega Coffee in the United States.

Ethiopia is landlocked so an exporter who buys coffee at auction will normally transport the commodity to neighboring Djibouti where it is shipped onwards in containers. The main points of arrival in Europe include Hamburg and Bremen in Germany and Antwerp in Belgium. The beans will then be roasted, blended and packaged in Europe before being distributed to coffee shops and retail chains.

While Ethiopia does produce some high-quality varieties, only a small proportion of its beans are sold as exclusive, specialty coffees from a specific location.

"It is used a lot for blending and just gets sold as branded coffee, either in supermarket brands or roaster brands," one coffee trader in Germany said.

Ethical labels such as Fairtrade have sought to help farmers by guaranteeing a minimum price but companies such as Vega Coffee and Kaffee-Kooperative.de in Berlin believe a radical overhaul of the supply chain is needed.

"Fairtrade is good but it is just a better way in an unfair market system. You have to change the rules completely to make a difference to the farmers," said Xaver Kitzinger, co-founder of Kaffee-Kooperative.

The German company has partnered with a cooperative in Rwanda to sell coffee which is not only grown in the East African country but also washed, roasted and packaged before being shipped to Europe.

Vega Coffee has created similar partnerships, such as building a roasting center in Nicaragua and training farmers in all aspects of the production process. "What we've found is because farmers have been working with coffee for generations they are really good at creating a really perfect final product," Vega's Terenzi said.

"Roasted coffee has been getting more expensive over the last 10 to 15 years. But there is no back end justification for it. Farmers, overall, their wages have been declining," he said. Terenzi said farmers working with Vega could earn up to $11 per kilogram although that would be for a completely finished product which had been dried, selected, roasted, packaged - even up to putting the postage on the box.

But there are obstacles to making the model mainstream, partly because big buyers often blend beans from many countries to ensure consistent quality, given that different crops can be affected by weather and other factors from year to year.

"A lot of good quality coffee is a blend from multiple origins," said Daniel Martz, who heads up sustainability practices at JDE. "We have thousands of different recipes to produce the same quality and consistency." Industry sources also said the value of the crop must not only reflect its contribution to beverages in coffee shops but to supermarket coffee too, where the cost per cup is a tiny fraction of the price of a Starbucks latte. Fierce competition between large retailers has helped drive down prices and consumers often respond less to information about the provenance of the product in supermarket aisles than when soaking up the ambience of a coffee shop, said Chris Stemman, executive director of the British Coffee Association.

Swiss food giant Nestle said there needed to be a collective, constructive approach across the industry to improve the lot of farmers around the world. "Addressing underlying issues to the current crisis is beyond the scope of any one company's actions," it said.