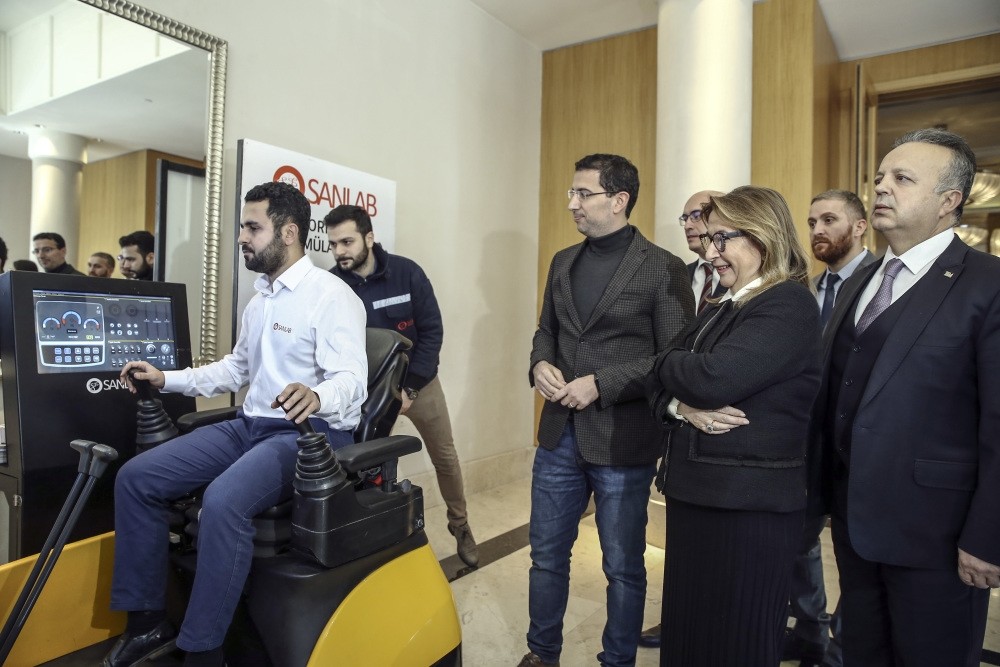 The digital gaming industry has boosted its exports by more than 100 percent over the last two years, hitting $1 billion in exports last year, up from $500 million in 2016.

In a meeting organized by the Turkish Exporters' Assembly (TİM) and the Game Developers Association of Turkey on Friday, Trade Minister Ruhsar Pekcan said the information sector has become an essential economic activity for the growth and development of both developed and emerging markets.

She stressed the sector's close relations with medicine, tourism, the academic world and art. "One of the components of the information sector with a high economic value is digital games. Last year, the global gaming sector reached $138 billion, and this figure is expected to hit $180 billion in 2021," Pekcan said.

"This striking data manifests the current situation of the sector and its high potential," Trade Minister Pekcan added.

The minister stressed that the Turkish gaming sector was valued at $750 million. The fast growth of the domestic game sector has contributed remarkably to the formation and development of an ecosystem.Pekcan underscored that the ministry plans to support the sector so that it can claim a bigger share in the $180-billion global gaming industry.

She stressed that digital game exports have doubled in the last two years as exports hit over $1 billion last year from $500 million in 2016.

The ministry, she added, conducts comprehensive projects to increase the global competitiveness of service sector stakeholders and has renewed the ministry incentives in accordance with the sector's needs and demands.

The digital game sector also benefits from the TURQUALITY, which is the first and only state-funded branding program in the world - formed in 2004 - to ensure that Turkish companies exporting goods around the world gain a competitive advantage by boosting branding potential.

Pekcan explained the three goals the ministry plans to accomplish in the upcoming period. The first is to raise the competitive power of Turkish exporters in sectors where they are most ambitious.

"Mainstreaming digitization and e-commerce, both in domestic and foreign trade, and the decrease in the waiting period for customs is our second goal, and the third one is to introduce new technologies in all areas of production," Pekcan said.

In accordance with these three goals, the ministry established the Innovative Trade Platform Consultation Council.

TİM Chairman İsmail Gülle said they appreciated the achievements of game developers in exports, noting that game exports has led the change in Turkey's exports. "The global exports of goods were around $17 trillion. Turkey gets a share of about 1 percent from this," he said. "Service exports rose by 50 percent to $5 trillion in the last decade. In this respect, we need to catch up with the growth in service exports."

Expressing his hope that the number of Turkish game developers would increase, Gülle said that the sector could proceed with a broader vision by establishing an exporters' union.

Gülle said they talked to the Game Developers Association of Turkey (TOGED) Chairman Ali Erkin to develop a software project where everyone can understand and learn exports.

"In order to teach exports to everyone from seven to 70, we will conduct a project with software that covers how to start exporting, what kind of processes it requires and how to get support. Hopefully, our aim here is to convey exports to our schools, youth and everyone. My aim is to train a generation who knows how to do business," Gülle said.

TOGED Chairman Ali Erkin said Italian and Spanish game developers have produced considerable publicity in the important trade activities in the world. He added that India has also made a name for itself in the global arena. However, he stressed Turkey is ahead of Italy, Spain and India in game development.

Erkin said they participate in many trade events and game fairs where they are always asked how advanced India is in this area.

"Yes, India does some subcontracting, but there are no major Indian brands, games or developer studios that have opened up to the world," he said. "Today we can count five very popular games from Turkey. Many of our developers and publishers are currently in the Top 10 in American stores. They make our exports."

"In the same way, one of our companies rank 30th among the 100 best games of all times in the PC market. On the mobile side, we have companies that constantly export and receive investment. We could come to this point with the contributions of our Trade Ministry," he said.

Erkin further stressed that the success of the Turkish digital gaming industry will continue in the future.