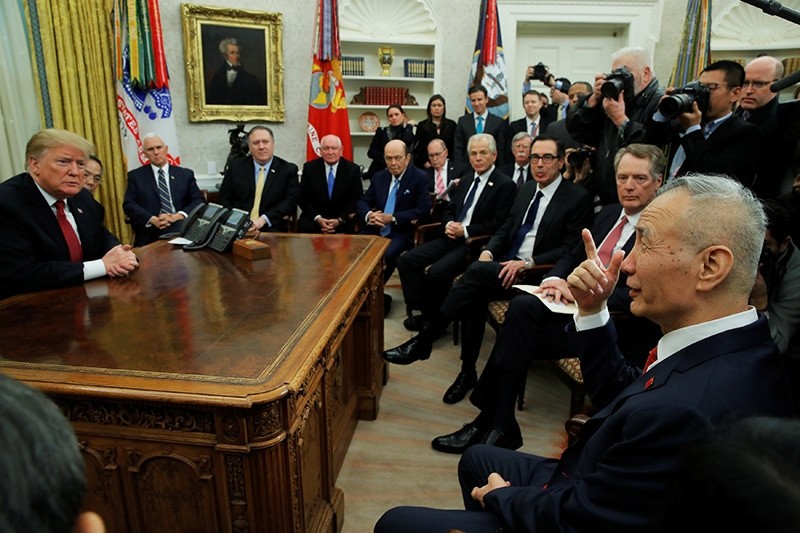 Trump read from the letter to reporters during a White House meeting with China's Vice Premier Liu He, who is in Washington trying to reach a deal that would ease trade tensions between the world's two largest economies.

"You will be going early February with your group to China," Trump said in the White House to negotiators after they spent a second day of talks with Chinese counterparts.

In a letter from Xi to Trump that was read out by the Chinese delegation, Xi said relations were at a "critical" stage and that he hoped "our two sides will continue to work with mutual respect."

Xi also said he hopes both sides will be able to meet each other halfway to reach a trade agreement before a March 1 deadline.

Washington has set a deadline of March 1 for China to agree to deep reforms ending what the White House says are unfair trade practices, including protectionism and systematic intellectual property theft.

If there is no deal, though, he says tariffs already imposed on $200 billion in Chinese imports will rise from the current 10 percent to 25 percent.

U.S. trade negotiator Robert Lighthizer said that although there had been "progress..., we have much work to do."

Talks on Thursday focused on structural issues and how to enforce any agreement, he said.

"It's impossible for me to predict success but... it could happen," Lighthizer said.

Earlier, Trump said that he did not want a half-hearted deal that only got China to open up trade on certain products.

"I have to do the real deal. I have to open up China. We're open to them, they have to be open to us," Trump said. "It's going to be a very comprehensive deal. We're going to cover everything."

He also said that any final deal would probably require a meeting between him and Xi. Later, he said that such a summit hasn't been set up yet.

Washington and Beijing since last year have exchanged tit-for-tat tariffs on more than $360 billion in two-way trade, putting downward pressure on the Chinese economy, where growth is slowing.