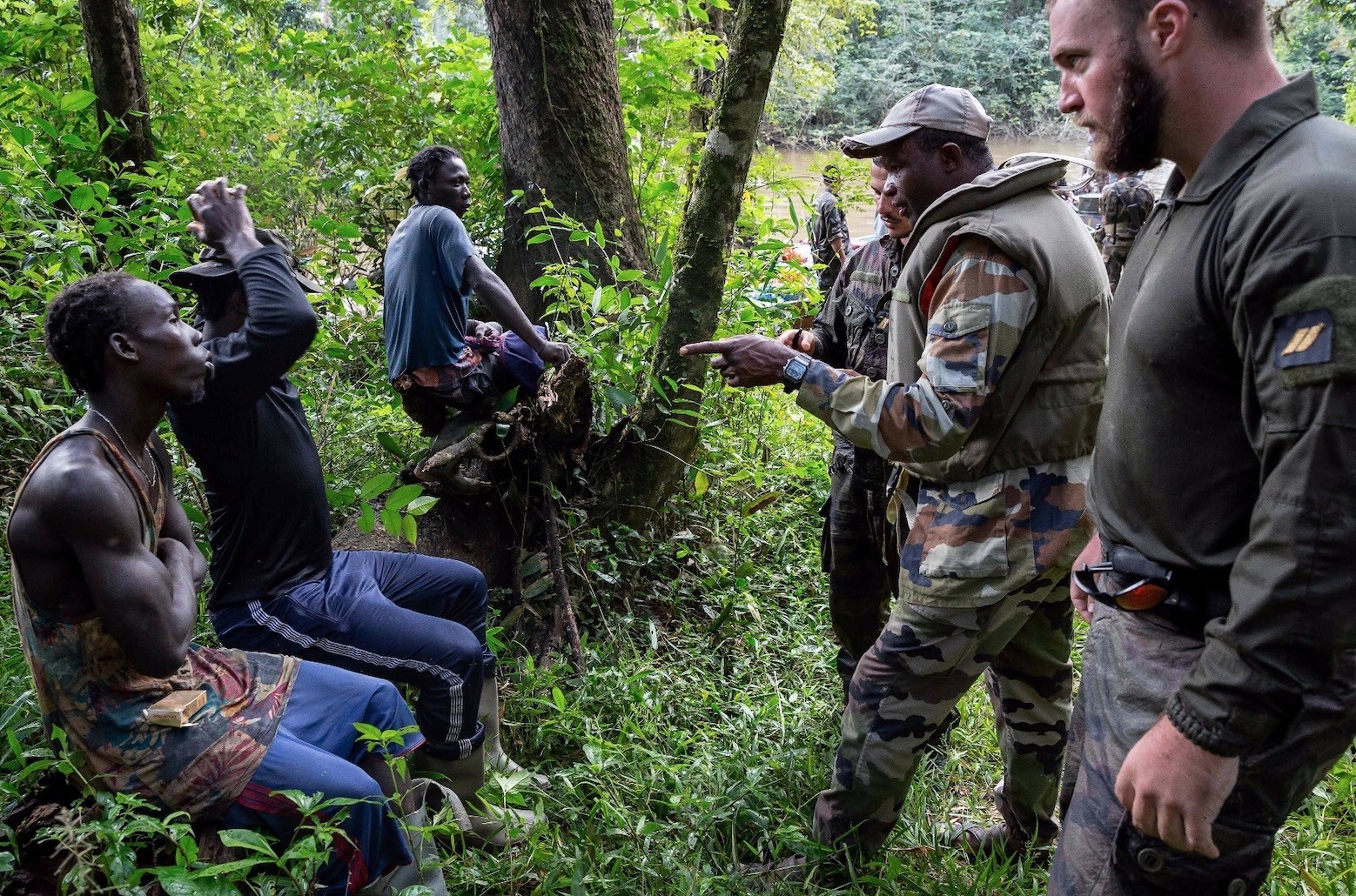 A gram of gold is the common instrument that determines the exchange value of goods in the alternative jungle economy of French Guiana, fostered by mining camps

Honda all-terrain vehicles have replaced mules as the beast of burden of choice, but the wildcat mining camps of French Guiana are governed by the same rules and violence that have marked gold rushes since the 19th century.

Around 10,000 men are thought to be toiling deep in the jungle of the territory in South America, stripping away the soil to sift for golden flecks while playing cat and mouse with the authorities.

They have created a clandestine economy, whose base currency is a gram of the prized metal - the average daily pay for the "garimpeiros" (miners) who brave squalid conditions, and the risk of arrest.

The miners can buy supplies, transport - and pay bribes - with gold dust folded into pieces of paper, or an IOU voucher symbolizing 1 gram, which is worth around 30 euros.

Soldiers in France's Ninth Marine Regiment are well familiar with the workings of this backcountry society, having staged dozens of raids against the gold panning operations.

"You start with the worksite, where they dig and wash the dirt using generators and pumps," said Martin, a captain in the regiment, during a patrol in the Apatou region this month accompanied by AFP journalists.

"There, no alcohol is allowed," Martin said, giving only his first name in line with military policy. "They take drugs and work themselves into a stupor. Then on Saturday night and Sunday, they head to the cabarets."

Farther from the rivers, which provide the only way of accessing the remote sites by boat, are camps that have grown into villages complete with bars, workshops, makeshift jewelers and churches which are packed on Sundays. At the cabarets, women perform pole dances on stages festooned with disco balls and blaring sound systems, while brothels await upstairs. The owners organize shows and bingo games, with prizes tailored to their audience: For New Year's Eve, the "Garimpo Iopass" cabaret offered the chance to win a pump motor or Yamaha outboard engines.

Depending on how supply lines are functioning, a pair of boots at the village store can cost 30 grams of gold - nearly 1,000 euros - while a bottle of cachaca liquor goes for five to 10 grams.

A six-pack of cold beer hovers at around a gram and French forces monitor this price, in particular, seeing it as a key indicator of how well they are disrupting supply routes.

"To operate this deep in the forest, logistics are essential," said Charles, another captain on the Apatou patrol.

"Everything has to be brought in, first of all, the fuel for the pumps and generators," he said. "So they need canoes, then the ATVs."

ATV drivers, who are almost always Brazilians, and canoe pilots are usually self-employed, paid per trip.

The all-terrain vehicles, preferably Hondas, are customized by removing the rear brake - useless in the jungle mud - and adding a third shock in the back for absorbing heavier loads.

"I've seen ATVs carrying seven 60-liter cans, plus gear," Charles said of the vehicles, worth 400 grams, or some 12,000 euros. Also at work are gangs of roadmen offering access to cleared paths or shortcuts they keep barred with heavy chains. The toll is 2 grams.

At the bottom of the pyramid are the "petroleros" hauling jerricans of diesel fuel through the forest on foot, while "raseros" earn a few grams by clearing out the vines and trees for a new camp.

Carpenters wielding chainsaws earn more since they cut the trees into planks for the sluicing and sorting tables.

If arrested, a "garimpeiro" might be able to keep his jeweler even if all the other material - often obtained by taking on huge debts - is seized or destroyed.

At the top of the economic chain are Chinese merchants on the Suriname side of the Maroni river, who supply all the shovels, high-pressure sprayers and other equipment needed for the panning camps.

Inside their shops are sacks of rice and beans, and freezers stocked with frozen chicken and other meat. Outside are dozens of barrels of fuel, hoses and ATVs.

"They are extremely rich because they profit twice: They sell the gear on the one hand, then buy the gold and deposit it in accounts in Suriname on the other hand," Jean-Sebastien, another French captain, said. "They extend loans to the garimpeiros and profit from their labor, without ever having to leave their stores," he said. "But they too have costs to bear," added Martin. "They get shaken down by the Suriname army and police, and sometimes by the ultraviolent gangs."

And in a world where gold fever goes hand in hand with the risk of malaria or the swollen feet of beriberi disease, disputes are settled with a shotgun, if not a Kalashnikov.

Along the jungle trails, fresh mounds of dirt mark the most recent graves, maybe with an overturned bottle of rum by way of a cross.