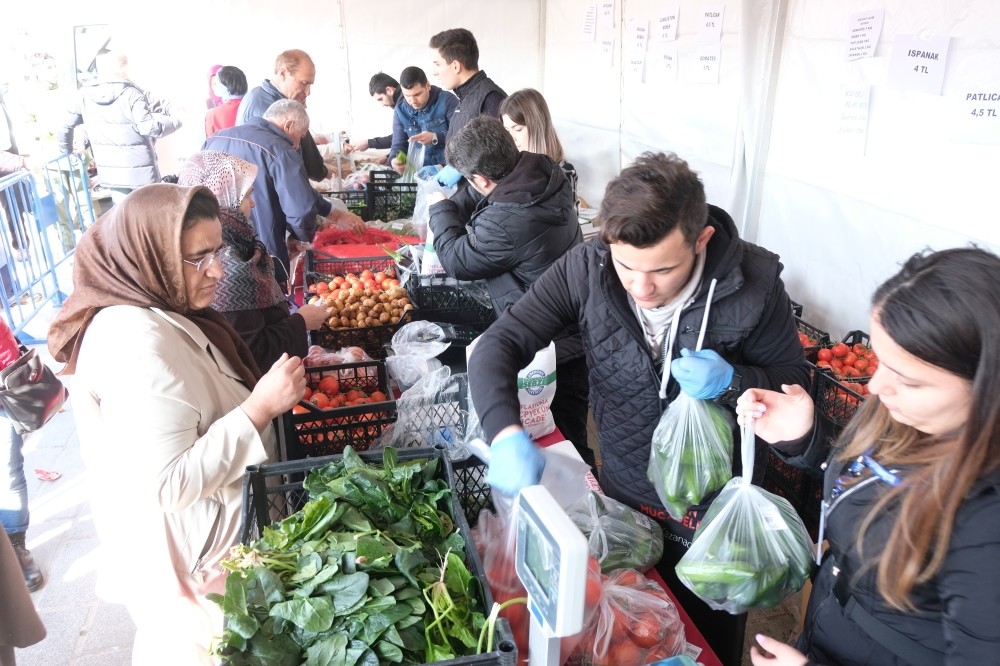 Direct sale points launched on Monday to offer vegetables & fruit to average consumers at affordable prices have already forced grocery chains to lower prices. Officials are now planning to transform these sale points into stores run by cooperatives.
by Daily Sabah Feb 15, 2019 12:05 am

Following a great response from citizens, officials have decided to transform municipal direct sale points into cooperative stores that will sell the products of agricultural credit cooperatives, without putting the distribution and profit burden on average consumers

The government has launched a new plan to turn the municipal direct sale points, which lowered the prices of vegetables and fruits to offer these products to average consumers at affordable prices, into stores. This new project, expected to be announced soon by President Recep Tayyip Erdoğan, will be beneficial for both producers and consumers. This practice aims to circumvent speculators and regulate and strengthen the current system of distribution, according to a report by Turkish daily Sabah. The products, which are purchased from the producers almost every year by the Agricultural Credits Union, a subsidiary of Turkish Agricultural Credit Cooperatives, and put on sale in different stores, will be sold from the cooperative stores.

The union, which has investments in different cities around Turkey, made purchases of TL 776 million from producers last year. The union, which produces 270 kinds of products, including vegetable oils, flour, pasta, pulses, dried fruits, tea, sugar, milk and dairy products under the brand of Turkish Agricultural Credit Cooperatives, offer them for sale at 4,000 stores. With this practice, these products will no longer only be available in existing markets but will be sold in cooperative stores.

The Agricultural Credit Cooperatives serves with 16 regional associations, 1,625 cooperatives units and 186 offices. The cooperative, which makes purchases from 1.1 million farmers, presents these products in a variety of facilities and offers them for sale at different stores. With investments in Turkey's various cities, the union employs 7,158 people countrywide.

Food prices in Turkey recently spiked due to a major decrease in supply emanating from seasonal conditions, increasing costs and price speculation by wholesale distributors. In order to counter price disruptions, the Turkish government, with the help of local municipalities, launched direct sale points Monday in Ankara and Turkey's largest city, Istanbul. The shops, serving in 51 venues in Istanbul in central locations of the province's 34 urban districts and 15 locations in Ankara, offer the most-consumed vegetables, such as tomatoes, onions, potatoes and eggplant, at affordable prices.

In his address on Wednesday, President Erdoğan also stressed that the direct sale points might spread across Turkey with a plan to be devised in coordination with municipalities, relevant ministries, merchants and producers. The president also stressed the government has launched the practice of municipal direct sale points to offer our citizens affordable prices and unravel the wrongdoings of the price speculators. "We are not competing against our tradesman, but we want to relieve our citizens of the burden of high food prices," President Erdoğan said and added that the direct sales points did not compromise free market rules.

In this more developed version, direct sale points, or "tanzim satış" in Turkish, will be transformed into cooperative stores. Tanzim means "order" and satış means "sale" in Turkish.

Increasing fuel and fertilizer costs triggered by the slump of the Turkish lira, decreasing production, the rising number and intensity of natural disasters, and the lack of action to regulate the market are often cited as the main causes of high food prices.

Government officials claimed that the rise in food prices has turned into a tool for exploiting citizens, promising to stop those who "terrorize" wholesale markets.