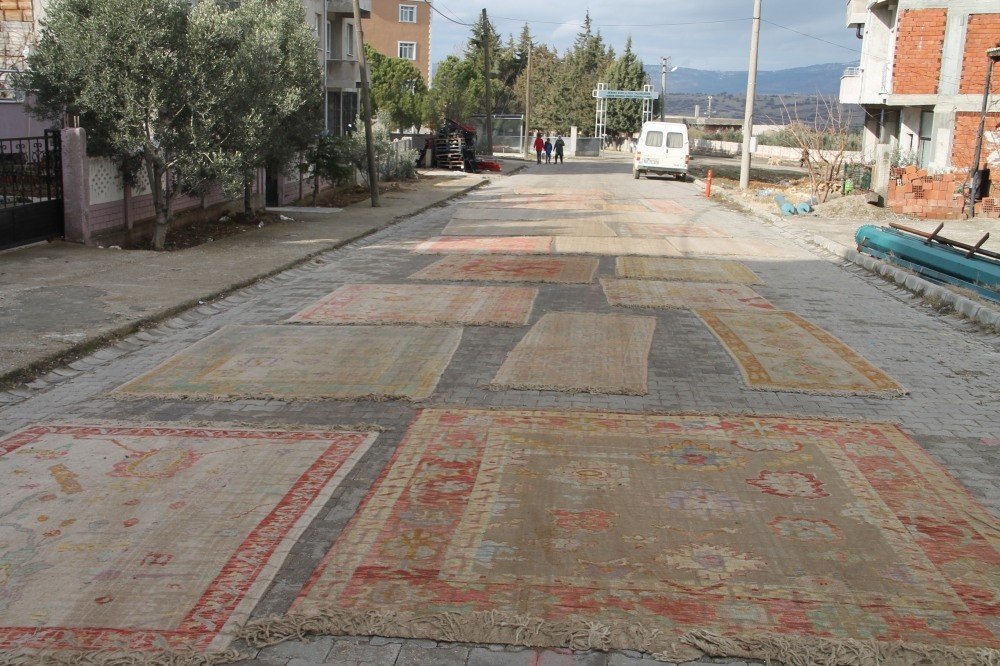 Rug makers are using innovative aging techniques in Demirci in western Manisa province, a leading center of hand-woven rugs in Turkey, to sell them at twice the price compared to normal hand-woven rugs.

In workshops scattered around Demirci, rugs of different designs and colors are woven in accordance with orders from abroad.

A majority of the rugs are brought down from the weaving loom and exported, while the rest are worn out by chemical and traditional methods and marketed abroad.

Worn out by natural methods and exported, these hand-woven rugs are trimmed off the wool covering their surface and washed after being removed from the weaving loom, they are then laid out on roads and streets.

Vehicles and citizens pass over the rugs on the streets for about 15 days. The more vehicles drive over the rugs or people walk on, the more value it gains.

After the aging process on the road, the wool-trimmed rugs are once again washed five times. Later, the damaged parts are repaired, followed by their export to the U.S. and many European countries.

Some hand-woven rugs are also worn out by using chemical products. Demirci Chamber of Commerce and Industry Chairman Nurettin Kelem said rugs have been worn out by chemical methods in the district for about 10 years, while for the last two years, natural methods have also been used in this regard.

Kelem said the rug worn out by natural methods looks more original, adding a hand-woven rug, which ages in about 100 years, reaches the same condition in a month via this method, stressing that it looks more natural and is sold as an old carpet. "It is preferred in authentic places and sold to the U.S. and many other European countries with more added value for at least twice the normal cost," he said.

Ali Sarı, a local business owner who has been washing rugs for 20 years, said he started wearing out rugs two years ago upon demand.

Saying that hand-woven rugs are worn out in a month by special methods, he explained that the rugs laid down on the road for 15 days are later trimmed, washed five times, polished and sent to Istanbul after the last touches. Pointing to international interest in hand-woven rugs, Sarı said, "There is a form of rug that foreigners call 'Turkish knot'. No other country can do that. They especially want a Turkish knot rug. They want them due to their fondness of hand-woven rugs since the Ottoman Empire."

Mustafa Yavuzel, one of the locals, also said that the natural method of carpet wearing is an alternative source of livelihood for the district. "We see the rugs on the streets of our city. At first, we wondered why the rugs were on the ground, but we later learned the reason why. We pass over them with our vehicles and help with the aging process to add extra value," Yavuzel added.