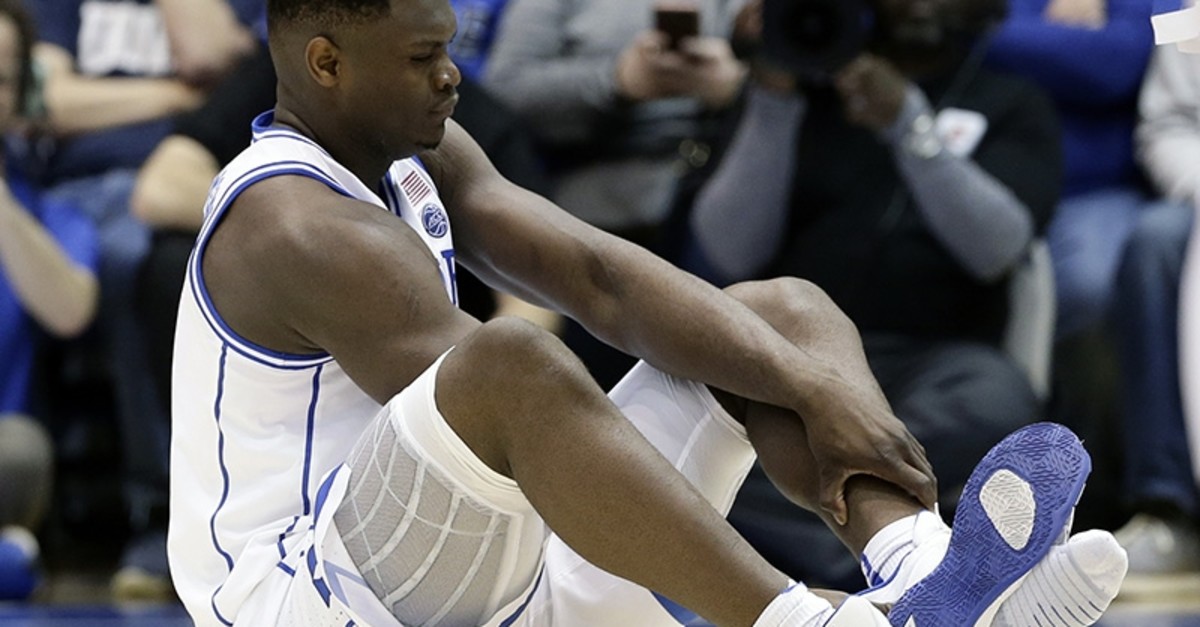 Nike was in damage control mode on Thursday after U.S. college basketball star Zion Williamson suffered a knee injury when his shoe shredded during a marquee game attended among others by Barack Obama and Spike Lee.

The Duke University forward, expected to be the top player taken in June's NBA draft, was injured just 36 seconds into Wednesday night's rivalry game against the University of North Carolina.

The 18-year-old Williamson, who has been averaging 22.4 points per game, was dribbling near the free throw line on his team's first possession when he planted his left foot and his sneaker blew apart.

The blue sole of his Nike hightops tore away and Williamson's foot poked out the bottom of the shoe.

The dynamic freshman dropped to the floor grimacing in pain and holding his right knee. He limped off the court and was removed from the game, which was being broadcast nationally on ESPN.

There was initial concern that Williamson may have suffered a serious knee injury but Duke Coach Mike Krzyzewski said after the game that it was a "mild knee sprain."

"I've seen guys bust through shoes but not sprain their knee," Krzyzewski said. "We don't know how long he'll be out."

Duke, which was the top-ranked team in college basketball going into the game, ended up losing 88-72 to eighth-ranked North Carolina.

The 6ft 7in (2.01m) Williamson has been the most sensational player of this year's NCAA season, thrilling fans with thunderous dunks and displaying incredible agility and leaping ability for a player who weighs 285 pounds (129 kilograms).

Nike, whose shares fell 1.06 percent on Thursday to close at $83.94 in New York, said it was trying to figure out what had happened.

"We are obviously concerned and want to wish Zion a speedy recovery," the sports apparel giant said in a statement. "The quality and performance of our products are of utmost importance.

"While this is an isolated occurrence, we are working to identify the issue," Nike said.

Among those sending their best wishes to Williamson was NBA superstar LeBron James, a Nike client, and Obama, who was among the celebrities attending the sold-out game between the Blue Devils and Tar Heels.

Obama could be seen pointing from his courtside seat when Williamson's sneaker tore apart and saying "His shoe broke!"

"Zion Williamson seems like an outstanding young man as well as an outstanding basketball player," Obama said later in a tweet. "Wishing him a speedy recovery."

Nike, which has a 12-year exclusive contract to supply Duke with shoes and other gear, is engaged in an ongoing battle with rivals Adidas and Under Armour for the loyalty of top sports stars.

The incident with Williamson's shoe is not the first with Nike products.

Nike replaced Adidas in 2017 as the official supplier of basketball jerseys to the NBA and there have been some complaints about the shirts ripping.

Nike has also been facing a boycott campaign after signing Colin Kaepernick, the former NFL quarterback who began kneeling during the national anthem to protest racial inequality and social injustice.

The boycott does not appear to have had much of an impact on Nike sales, however, and Kaepernick tweeted on Thursday that a tribute "True to 7" jersey to him had sold out.