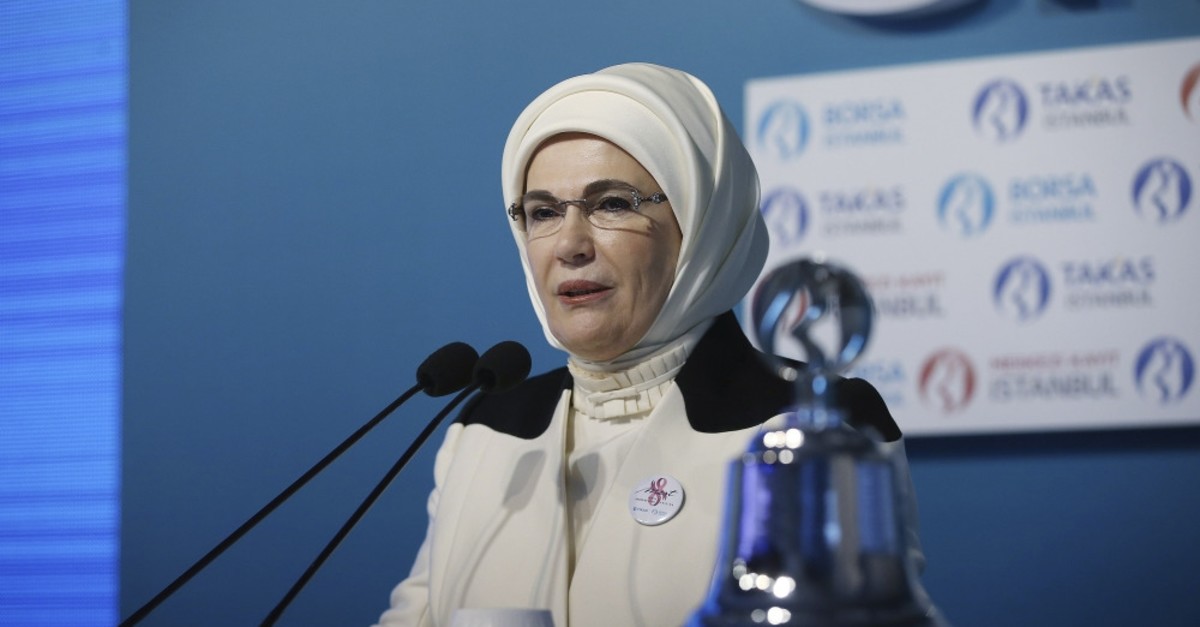 The commitment to empowering women in business, politics and social life has been one of the prioritized policies in Turkey and International Women's Day, celebrated on Friday with many events both at home and abroad, has been an auspicious occasion to highlight that priority once again. As part of International Women's Day programs, Borsa Istanbul (BIST) and the Turkish Business Women's Association (TİKAD) organized a program entitled, "The Gong in the Borsa Istanbul Stock Exchange Rings for the Equality of Women and Men." Addressing the participants at the event, first lady Emine Erdoğan drew attention to the importance of women's participation in all areas of life.

"An equation that excludes women, who constitute half of the world's population, is not a true equation. If we aim for a good future, we have to build it together as men and women. Based on this fact, the target for women's participation in the labor force in our country by 2023 is 41 percent. In achieving this goal, we all have duties," first lady Erdoğan said.

She indicated that women's employment and the ratio of women in management have reached figures that are "not enough, but pleasing."

The ratio of women in the management in Turkey increased to 15.6 percent in 2018 from 8.9 percent in 2002, while women's participation in the labor force rose to 34.1 percent from 27.9 percent, the first lady said. In 2005, the number of employed females was 5.11 million; yet, as of November 2018, this number reached 8.96 million. She added that the labor force participation rate of women also increased to 34.1 percent in 2018, from 23.3 percent in 2005. "Considering ministers, deputies, bureaucrats and ambassadors, the glowing light of women is noticeable everywhere. Today, the rhetoric about women, of course, is very precious, but when it comes to Anatolian women, we see that the active presence of women in society is not something new. If we correctly analyze our history and our civilization, it is seen that women have always been at the center of life. Our women have practiced in many fields from agriculture to trade and contributed to production. We are in an effort to follow this tradition and to build areas where we can exist today," she said.

Meanwhile, Treasury and Finance Minister Berat Albayrak highlighted that women have made valuable contributions to Turkey's success story over the last 16 years.

"So Turkey's success story continues to grow, it is important that women resolutely open new horizons for us with new stories as they have done so far. We trust our women and we believe that they will make indispensable contributions to the change and transformation of Turkey."

Albayrak stressed that it is very important for women to participate in the production structure in a period when global competition is so intense, saying that they should benefit from women's energy the most. Underlining that they will not and should not allow discrimination and injustice to pose an obstacle to Turkey's great potential, Albayrak remarked that Turkey underwent such periods previously and experienced discrimination against women as in many other areas.

Albayrak noted that Turkey has been going through extremely serious change and transformation processes in all areas in the last 16 years, saying that the country is rapidly progressing toward a more democratic, politically more stable and economically stronger structure.