Turkey, EU chambers and exchanges to work together on joint projects 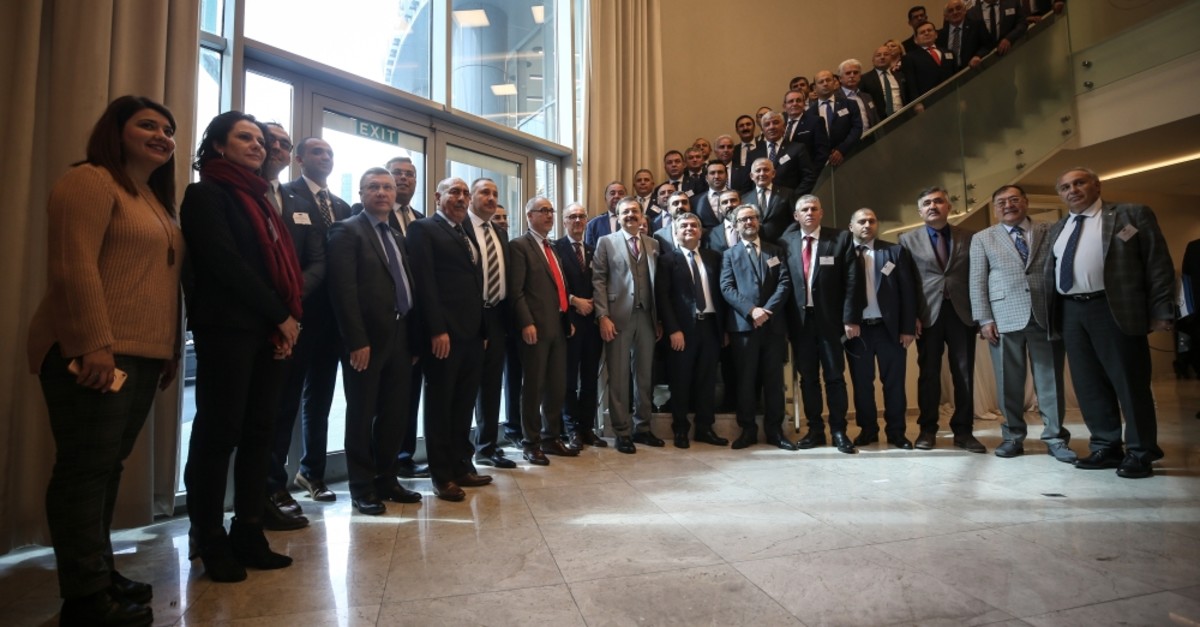 Turkey-European Union Business Dialogue (TEBD) project promotion meeting was held in Istanbul yesterday with the participation of the representatives from the Turkish and European chambers and commodity exchanges, April 3, 2019.
by Daily Sabah with AA Apr 04, 2019 12:05 am

Turkish and European chambers and commodity exchanges will cooperate on 19 projects focusing on agriculture, digitalization, small and medium enterprises and women entrepreneurs to reinforce bilateral economic dialogue and trade

More than 50 chambers and exchanges from Turkey and EU members will work together on 19 projects as part of the Turkey-EU Business Dialogue (TEBD) project. The TEBD project to promote the integration of the European Union and Turkish business communities and ensure greater awareness of business opportunities between Turkey and the EU was launched in September last year by the Union of Chambers and Commodity Exchanges of Turkey (TOBB) and the Association of European Chambers of Commerce and Industry (EUROCHAMBRES). Yesterday's event was a kick-off activity to involve Turkish and European Chambers working together on joint projects.

"There were around 100 applications from Turkey for this project, 19 projects were accepted from 26 provinces and one other county," Hisarcıklıoğlu noted.

The project will involve a partnership between 28 chambers and commodity exchanges from Greece, Bulgaria, Romania, the Czech Republic, Hungary, Poland, Lithuania, Italy, Spain, France, Germany and Belgium with 30 of their Turkish counterparts.

The TOBB chairman said that besides providing support to service capacities of chambers and commodity exchanges, these projects would also contribute to Turkey's EU accession process. "From the east to the west, we are showing the EU's vision through our country. We know that we need more dialogue. Therefore, we see this project as a really important one that will bring closer the real actors of Turkey-EU integration," said Hisarcıklıoğlu.

On the other hand, Gabriel Munera Vinals, deputy head of the EU delegation to Turkey, said with the project, collaboration on various issues will be made, ranging from energy efficiency to hazelnut production, providing high-added value, and from innovation to women entrepreneurship.

He indicated that the bloc held such initiatives in high regard and supported the TEBD's projects.

Stressing that these initiatives will provide opportunities for both Turkey and EU to overcome some challenges by bringing Turkey-EU business worlds closer together, Vinals indicated that the initiatives were an important step on behalf of the business community toward improving economic integration between Turkey and the EU.

"The EU has provided two-thirds of foreign investments made in Turkey over the last 10 years. Investments from Turkey to EU are also increasing with each year," said Vinals.

The TEBD, established by the Association of European Chambers of Commerce and Industry as well as TOBB, aims to strengthen understanding between the Turkish Chambers and their counterparts in the EU.

Deputy Foreign Minister Faruk Kaymakcı, who heads the Department of the European Union, drew attention to the progress Turkey has made in the criteria for the visa liberalization with the EU. "Turkey fulfilled 66 out of 72 criteria required for visa liberalization. We have a four-and-a-half year non-election period. We will deliver the requirements of the six remaining criteria and pave the way for the Turkish people and the business world," Kaymakcı said.

The deputy foreign minister also drew attention to the necessity of updating the customs union. "Turkey is one of the largest trade partners of the EU, and the customs union has played a huge part in boosting the bilateral trade," he said.

With the update, it is planned to expand the nature and range of products in the customs union to cover agricultural, services and public procurement areas and to protect Turkey from harm in the free trade agreements to be signed by the EU with third countries.