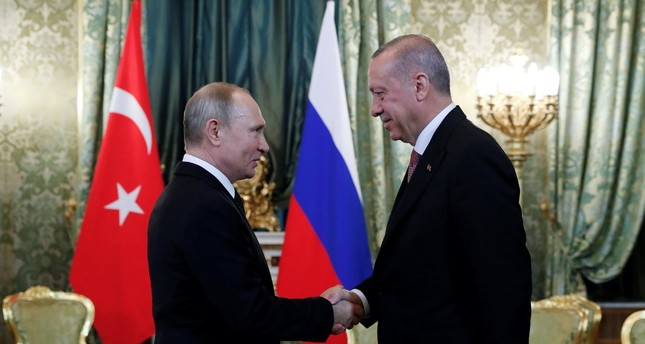 President Erdoğan and his Russian counterpart Vladimir Putin discussed guidelines for the expansion of mutually beneficial economic ties and ways to bring the bilateral trade volume up to $100 billion, the figure previously set by the two leaders

Turkey and Russia are exploring new ways to push their current $26 billion bilateral trade figure to $100 billion. In order to accomplish that target, the two countries are looking to diversify the areas for commercial cooperation by expanding the range of traded goods. The issue dominated the agenda of the 8th High-Level Cooperation Council meeting held Monday in the Russian capital Moscow. The meeting was attended by President Recep Tayyip Erdoğan and Russian President Vladimir Putin. In his address at the meeting, President Erdoğan said the trade volume between the two countries grew 15 percent last year to hit $26 billion. He said that Turkey and Russia have already set a goal to raise bilateral trade volume to $100 billion and added that they were now focusing on new goals for the upcoming period. The president also pointed out the importance of economic relations between the two countries.

"Since the 1990s, economic cooperation has been the pillar of the bilateral rapport between our countries," he said. Erdoğan confirmed that Turkey and Russia will sign three documents, which will be a step forward for the future of both countries. Besides increasing bilateral trade, Turkey hosted millions of Russian tourists last year. "We set a record last year by hosting 6 million Russian tourists," Erdoğan said. Russia was the top market for Turkey's tourism sector with 5.96 million visitors last year; some 15.1 percent of all foreign visitors to Turkey. The country welcomed a total of 39.5 million foreign visitors in 2018, a 21.84 percent increase year-on-year, according to the Culture and Tourism Ministry. President Putin, on the other hand, said the two countries agreed to improve ties in line with their enhanced cooperation framework. Russia and Turkey could expand their bilateral trade by removing the restrictions that are still in force in that area, Putin told the meeting, according to the Russian news agency, TASS.

"I believe the expansion of trade could be facilitated by abolishing the current restrictions in this area and by diversifying the goods supply," Russian President Putin said.

Putin added that the volume of Turkish-Russian investments has reached $20 billion. Elaborating on bilateral economic cooperation, the Russian president said the trade turnover was up 15 percent to $25 billion last year.

President Erdoğan, meanwhile, provided a detailed account of Turkish investments in the country, noting that around 1,300 Turkish businessmen were investing in Russia. "Turkish entrepreneurs are operating in almost every sector in Russia. Nearly 1,500 businessmen, with investments worth $10 billion, are creating employment and contributing to the wealth of the Russian people," Erdoğan said. Turkish contractors have so far undertaken 1,961 projects worth $73 billion, he added.

"I have instructed Turkish ministers to facilitate Russian investments in Turkey and we expect the same for Turkish investors operating in Russia," he said, expressing his belief that the Russian government will provide more support to Turkish entrepreneurs. Erdoğan particularly underscored the necessity to ease customs procedures for Turkish truck drivers and agricultural exports. President Erdoğan also noted that the steps for the visa liberalization will be taken shortly.

On the visa regime, The Russian president also noted that the visa requirement for Turkish truck drivers will be cancelled in near future.

Putin also underscored the growing cultural ties between Turkish and Russian citizens with the tourism cooperation. Turkey and Russia declared 2019 as a cross-year of culture and tourism to promote bilateral culture and tourism. The opening ceremony of the cross-year of Turkey-Russia Culture and Tourism was held yesterday with the performance of "Troy" by the Ankara State Opera and Ballet at the Bolshoi Theater.

"I am sure that the cross-year of culture, which opens at today's ceremony at the Bolshoi Theater, will contribute to the expansion of human exchanges," the Russian president said while explaining the expansion of cultural and tourism ties between the two countries.

Energy is an important part of the Turkish-Russian economic relations. In their evaluation, both Turkish and Russian presidents highlighted the importance of energy trade and cooperation between the two countries.

"Turkish-Russian energy cooperation is the pillar of bilateral economic ties," Erdoğan said. He noted that the TurkStream natural gas pipeline will be complete by year-end and will start pumping gas to the Turkish network.

Putin said the two countries are working on a number of major projects, including the Akkuyu Nuclear Power Plant (NPP), expected to be launched by 2023, and the TurkStream natural gas pipeline project, the land and sea sections of which have been recently connected.

"The opening of a new gas pipeline – TurkStream – will significantly increase the supply of Russian gas to Turkish consumers." He added that this year the construction of a terminal on Turkey's Black Sea coast is expected to be completed. "Another strategic project is the construction of the Akkuyu NPP in Turkey, with the launch of the first unit set for 2023. At this stage, it is necessary to attract additional funding and conclude an agreement with potential Turkish investors," Putin said.

At the meeting, Putin said implementing a contract to deliver the S-400 missile systems to Turkey is a priority for both Moscow and Ankara.

"Our countries are facing serious tasks aimed at boosting defense cooperation. First of all, it is about implementing a contract to deliver the S-400 missile systems to Turkey," Putin said.

According to him, Russia and Turkey have other promising defense cooperation projects to work on. In this connection, the Russian president mentioned the delivery of Russian military products to Turkey.

"Both Turkey and Russia are sovereign states and we are not going to allow any third country to meddle with our sovereign decisions. That's the essence of being an independent state," Erdoğan said. "In every decision we make, we take our sovereignty and national interests into consideration. The third parties do not consult with us in every decision they make," he added.

The president highlighted that no one can ask Turkey to step back from such deals.

Russian Direct Investment Fund (RDIF) chief Kirill Dmitriev announced Monday that Turkey and Russia signed an agreement for the construction of health centers in Russia by the Turkish contractor Rönesans. Three regions on which the first centers will be built have been designated, he added.

Dmitriev drew attention to the mega health complexes and city hospitals that have been built in Turkey in the last decade. "We are going to propose a similar program for Russia.

The hospitals will be built by private contractors and will be transferred to the state after 15-year concession period," he said. Turkish contractor Rönesans Holding has a diverse portfolio in Russia, including the construction of energy infrastructure, stadiums, housing development projects and shopping malls. The company is also the contractor of several city hospitals in Turkey, including Elazığ, Adana, and Istanbul's İkitelli district.

"We see that based on what Yandex has in Turkey, it is possible to increase Russia's technological presence in both Turkey and the Arab countries," he said.

Yandex entered the Turkish market in 2011, launching a web portal in the country and opening an office in Istanbul. The Russian tech giant's search engine and a range of other services were offered to Turkish users.

Yandex.Market, a concern of Russian tech giant Yandex, signed an agreement with Turkey's largest e-commerce site, Hepsiburada, in September 2018. The deal will provide access to Turkish goods on a cross-border online retail service Yandex.Market, which was launched in December.

Russian consumers on Yandex.Market are able to choose from more than 5 million goods and products on Hepsiburada – from clothing, footwear, home textiles, accessories and household goods to small home appliances by leading Turkish manufacturers.

Meanwhile, the RDIF and its Turkish partners announced the establishment of a joint investment fund totaling 900 million euros (about $1 billion) during the 8th High-Level Cooperation Council Meeting in Russia in a bid to further increase bilateral economic ties and boost investment flow. The agreement was signed by Turkey Wealth Fund General Manager Zafer Sönmez and RDIF Chief Dmitriev.

Share on Facebook Share on Twitter
Previous in Business Three exporters' unions from Turkey will attend the International... Next in Business The United Arab Emirates has banned Skype, according to the Microsoft-owned...
DAILY SABAH RECOMMENDS