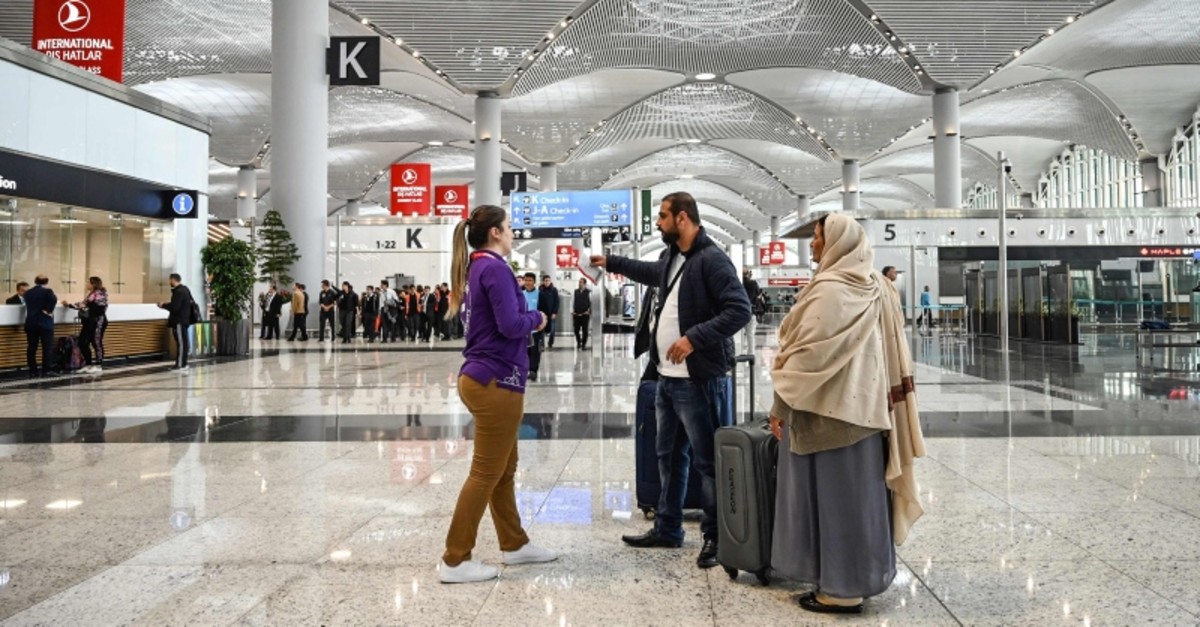 A staff member gives information to passengers in a hall of the new ,Istanbul Airport, on the first day after it moved from Ataturk International airport on April 6, 2019 in Istanbul. (AFP Photo)
by Daily Sabah Apr 10, 2019 12:12 am

Poised to be the world's largest airport once fully complete, Istanbul Airport served around 318,182 passengers in the first three months of the year, while the number of flights and passengers is now constantly increasing.

The figure points to the time period before all operations were shifted from Atatürk Airport to the new aviation hub. International and domestic flights at Istanbul Airport are now being increased incrementally as of Saturday after its mega move.

According to the General Directorate of State Airports Authority (DHMİ), the airport served 193,816 domestic passengers and 124,366 international passengers in the January-March period. Istanbul Airport served some 2,565 flights during the said period, including 1,413 domestic and 1,152 international flights.

On the other hand, 3,122 tons of cargo were carried from Istanbul Airport in the first three months, including 1,274 tons on domestic and 1,848 tons on international lines.

National flag carrier Turkish Airlines (THY) announced on Sunday it carried more than 25,000 passengers on its first day at its new home. On Monday it said it served around 85,000 passengers in 421 departing and incoming flights.

Yesterday it projected to handle 565 flights, including 294 departing and 271 incoming flights, serving some 103,850 passengers, Bilal Ekşi, the CEO of THY, said.

The world of civil aviation witnessed the greatest logistical operation in its history with THY's move to its new home and the new aviation center of the world: Istanbul Airport. The operation, dubbed the "great move" started while Istanbulites enjoyed their sleep at 3 a.m. on Friday morning.

Atatürk Airport, which was commissioned in 1953, no longer serves commercial flights as of Saturday. The airport, which handled 68 million people last year, will transition to other uses, such as training activities, aviation fairs and civil use.

During the grand shift, trucks carried equipment a distance of 400,000 kilometers, the equivalent of going 10 times around the world. Over 1,800 personnel were employed during the operation. The load consisted of over 10,000 pieces of equipment, from an aircraft-towing apparatus weighing 44 tons to extremely sensitive materials and was equivalent to a 5,000-truck volume.

Once all the stages are complete, Istanbul Airport will be the world's biggest international airport, covering 76.5 million square meters. The "world's new hub" officially opened on Oct. 29, 2018, the 95th anniversary of the founding of the Turkish Republic. The grand opening ceremony was attended by President Recep Tayyip Erdoğan, Turkish ministers, officials and heads of state from around the world.

The airport has the potential to welcome 90 million passengers annually and following the second phase of construction which is expected to be completed in 2023, this number will reach about 200 million. The airport will operate flights to about 350 destinations worldwide, thus becoming one of the main aviation centers in the world.