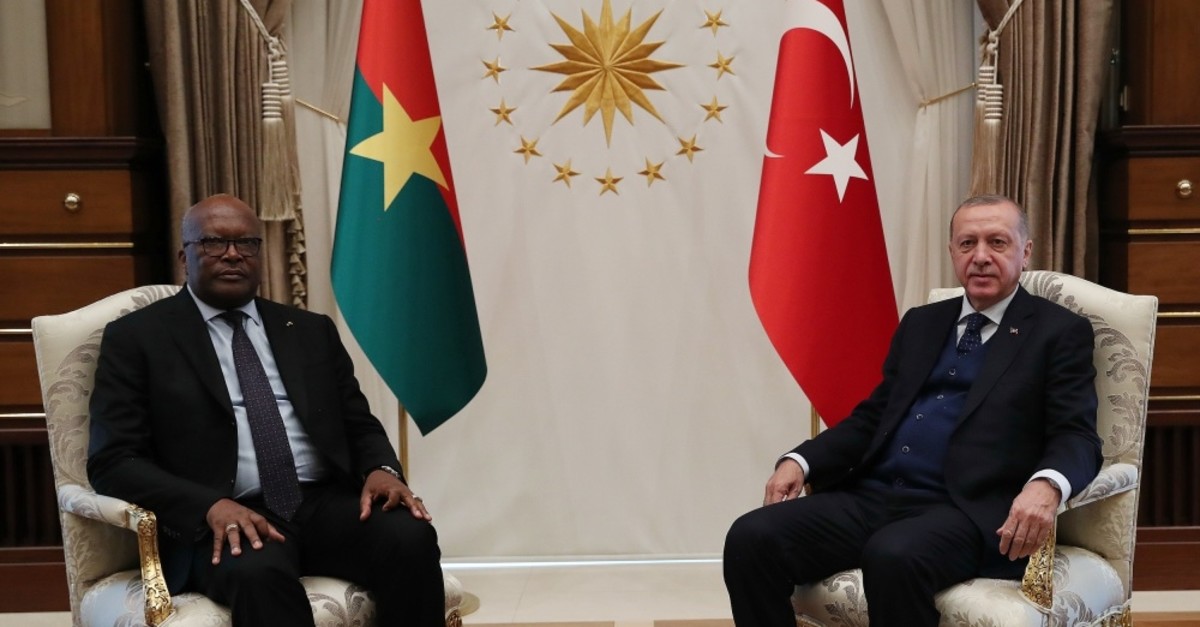 Turkey's cooperation with African countries continues without interruption in line with the goals stipulated in the Africa Initiative project that has gained momentum in the last two decades. The most recent example of the efforts to reinforce political and economic ties with West African countries was the two-day visit of President Roch Marc Christian Kaboré to Istanbul and Ankara upon President Recep Tayyip Erdoğan's invitation. Kaboré is the first president to visit Turkey from the West African country of Burkina Faso, which currently holds the rotating presidency of the G5 Sahel military alliance. In a meeting yesterday in Ankara, Erdoğan and Kaboré exchanged views on all aspects of the bilateral relations, agreeing to increase bilateral trade and enhancing mutual investments.

In a joint press meeting, Erdoğan underscored the necessity to expand the bilateral trade volume, which currently stands around $90 million. "The current trade figure does not reflect the high potential of the two countries given their total population exceeding 100 million," Erdoğan said.

The president also noted that the second meeting of the joint economic commission will be held soon in Burkina Faso. Erdoğan also expressed Turkey's support for the development of the social and economic development of the West African country with a 20 million population. "TİKA [the Turkish Cooperation and Coordination Agency] has so far carried out projects in agriculture and health to support the development of Burkino Faso," Erdoğan noted.

TİKA supported the planting of another exotic tree, the jatropha, in Burkina Faso. The biofuel which will be produced from jatropha trees will also help in fighting climate change in the country. The agency installed an irrigation system against the impending dry season and an extraction machine for crops was donated.

Moreover, the agency also implemented the "One Hundred Thousand Moringa Oleifera Trees" project, which was initiated in 2014. Moringa Oleifera, a tree endemic to Africa, grows fast and yields fruit in the form of oil seeds. The project started with TİKA's donation of young trees and agricultural equipment and continued with the planting of 100,000 moringa young trees on the lands of educational institutions and civil society organizations in 18 settlement units in Burkina Faso. The trees grew, and the project proceeded to the stage where moringa tree products would be used in the production of soap, oil, pharmaceutical products and foodstuff. The project also led to a rise in the employment of villagers. Speaking at the joint press conference, Kaboré said they had extremely productive and constructive talks with Erdoğan, recalling that it was the first visit from Burkina Faso to Turkey on presidential level.

He also stressed that the cooperation between the two countries should be strengthened at all levels.

As president of the G5 Sahel military alliance, Kaboré also thanked Erdoğan for the support and aid Turkey will be providing to Burkina Faso. Kabor began his visit by attending a Turkey-Burkina Faso business forum organized by the Foreign Economic Relations Board (DEİK).

"Today we're here to strengthen our relations with Turkey at the state level and develop our economic relations," Kaboré said. He added that Burkina Faso "greatly admires" Turkey for its reliable and innovative work, and continues to welcome Turkish businesspeople for greater investment.

Burkina Faso Chamber of Commerce President Mahamadi Savadogo said at the event that the trade volume between the two countries is currently $90 million, up from $50 million in 2014. He said Turkey is the ninth-largest supplier to Burkina Faso, particularly in construction and building materials.

During yesterday's meetings, Turkey and Burkina Faso signed a memorandum of understanding (MoU) on the promotion of bilateral investments and defense cooperation. Activities aiming at enhancing bilateral relations have gained momentum after the opening of the Turkish Embassy in Ouagadougou in 2012, and the Embassy of Burkina Faso in Ankara in 2014.

The launch of Turkish Airlines direct flights to Ouagadougou with a frequency of four times a week has been an important turning point in commercial and economic relations.

Meanwhile, around 200 students from Burkina Faso study in Turkish universities.