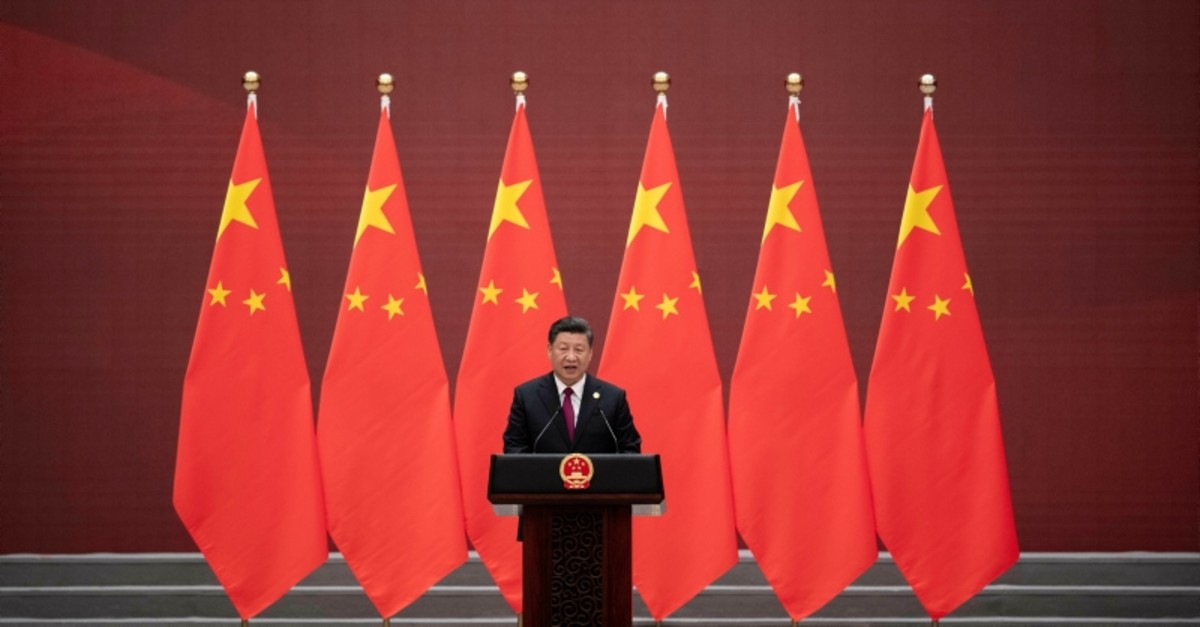 Chinese President Xi Jinping makes his speech during the welcome banquet, after the welcome ceremony of leaders attending the Belt and Road Forum at the Great Hall of the People in Beijing, Friday, April 26, 2019. (Pool Photo via AP)
by Associated Press Apr 27, 2019 11:33 am

Speaking at a gathering of leaders from three dozen governments to celebrate his signature project, Xi tried to dispel complaints the Belt and Road Initiative does too little for developing African and Asian countries that have built ports, railways and other facilities with Chinese loans. Xi said his government wants to "deliver benefits to all."

The upbeat tone of the two-day forum, at which leaders including Russian President Vladimir Putin praised Belt and Road, is a setback for Washington, which is trying to discourage other governments from participating.

On Friday, Xi promised to improve financial and environmental standards in response to complaints about debt and potential corruption and environmental problems. He pledged to work more closely with multinational institutions and to open projects dominated by Chinese state-owned companies wider to private and foreign contractors.

"We need to encourage the full participation of more countries and companies," Xi said at the event at a conference center outside Beijing.

Developing countries welcome the initiative launched in 2013, but some governments are struggling to repay Chinese loans. That has fueled complaints about a possible "debt trap." Critics also complain too little work goes to local companies, too little financing and other information is disclosed and Belt and Road might lead to corruption or environmental damage.

The United States, Russia, Japan and India worry Beijing is eroding their strategic influence by building a political and trade network centered on China, the second-largest global economy.

Despite that, Putin said Friday that Belt and Road fits with Moscow's initiative to develop a common market with three of its neighbors.

Beijing says the number of governments that have signed agreements to support Belt and Road has risen to 115 from 65. Beijing scored a diplomatic coup in March when Italy, a member of the Group of Seven major economies, signed on.

The Chinese president repeated his promise to adopt global standards for project development, purchasing and operations.

"We welcome the participation of multilateral and international financial institutions in Belt and Road investment and financing, and we encourage third market cooperation," said Xi. "With involvement of multiple stake holders we can surely deliver benefits to all."