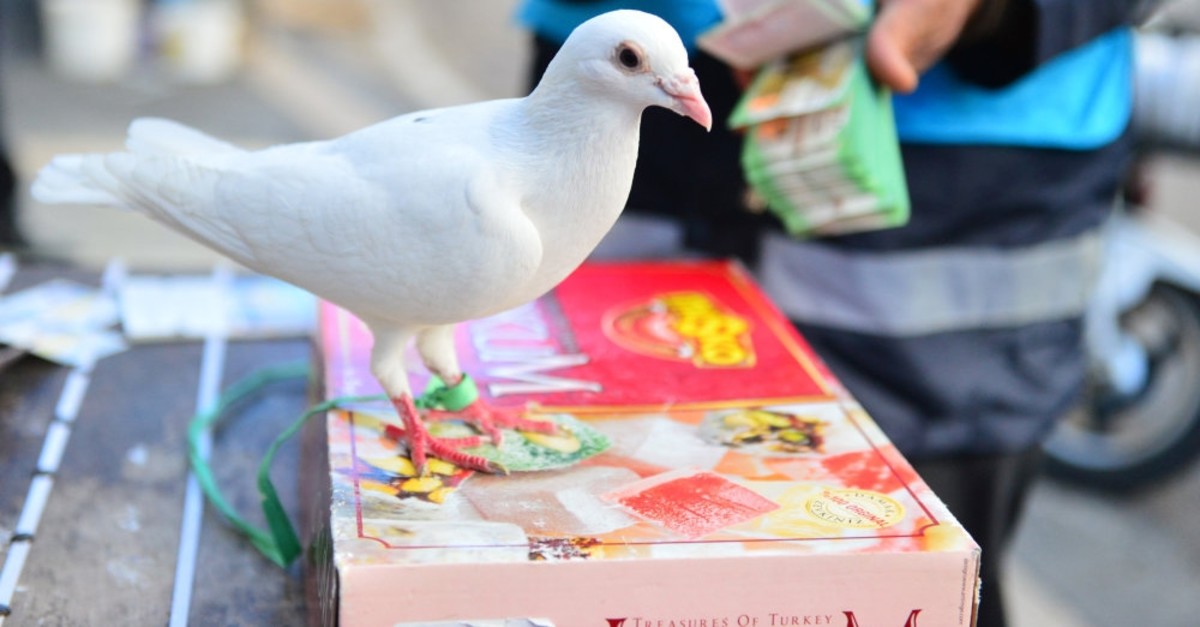 Turkish people believe that a white dove brings fortune if it picks up their lottery ticket; hence the white dove is the symbol of the National Lottery.
by Daily Sabah with Wires May 03, 2019 12:28 am

Turkey aims to take bids in June in a tender for the operating rights to the National Lottery; it aims to complete the deal by year-end, the head of the country's sovereign wealth fund said Thursday. Turkey's Sovereign Wealth Fund (SWF), which holds the licensing rights for the Milli Piyango lottery operator, has held talks with strategic players on the transfer of rights, SWF General Manager Zafer Sönmez was quoted as saying by reports in Turkish media. "We are considering the transfer of operating rights for a 10-year period. We have been talking with all major companies since February," Sönmez said.

General Manager of Turkey's Wealth Fund Sönmez continued to stress that there was potential to raise the lottery's annual revenues from TL 3.5 billion, or 0.1 percent of the gross national product (GNP), to 1-2 percent of the GNP.

"We will take the final bids in the middle of June. Our goal is to determine by end-June or early July who we will give it to. The full transfer will be done by end-year," he said.

Underscoring that their most recent step is to transfer the national lottery's operating rights, Sönmez said, "We will take steps for the National Lottery in less than a week. The National Lottery should be assessed with a different model. Our perspective is about how we can create the maximum value. We want to increase our income to over 1 percent by not selling the business. It has the potential to rise by up to 10 times. We have been in talks with all the relevant foreign and domestic strategic players, i.e., the largest players in the world in the games of betting and chance. There is great interest as we enter the market with the right model for the first time. The example of this in Turkey is İddaa [Turkey's sole legal sports betting platform]. The government did not sell it, but it is getting its income. We will do the same thing as İddaa."

He also remarked that when operating rights are transferred to a strategic player, all the income will flow to them and they will pay a commission to the operating rights holder, continuing that the player will give them a commitment of income as in İddaa. They will also have a share of the income. Had the National Lottery been privatized, the state would have received $2.75 billion for one time in 10 years. Now, however, they have the chance to fold the income.

Emphasizing that world giants that they have talked with are looking forward to entering Turkey, Sönmez said, "However, we seek the ways of creating the greatest value. We have the potential to increase the current income of TL 3.5 billion to TL 38 billion like in France, to TL 70 billion like in Italy and to TL 100 billion like in Greece. So, we will also have brought reputation to the National Lottery." According to Sönmez, the companies specialized in the games of betting and chance and meeting the criteria of a certain turnover must purchase at least 51 percent of the business, and a consortium can be formed for the remaining 49 percent.

SWF TO BE MINORITY PARTNER OF LARGE INVESTMENT

The SWF general manager also said they will be a minority partner in a major foreign investment in Turkey that will reduce the current account deficit, without specifying the investment, but said the fund could take a stake of around 15-20 percent in the project.

"We are holding the final talks on becoming a minority partner in a very big project which will lower the current account deficit. We will be a minority shareholder in a big foreign investment being made in Turkey," Sönmez said.

Sönmez also elaborated on the joint investment fund totaling 900 million euros (about $1 billion), with the first step consisting of 200 million euros, established by the Russian Direct Investment Fund (RDIF) and SWF and announced during President Recep Tayyip Erdoğan's visit to Moscow last month. "We are about to talk about final contracts. We will make the first investments under this fund this year. This is a fund structure where 50 percent will be invested in Russia and 50 percent in Turkey. It is too soon to talk about companies. We will invest in health, technology, infrastructure and consumer products. Russia will tell us the companies that can invest in them and vice versa. With mutual consensus, we will be capital partners with 50 percent share for each of us," said Sönmez.

Highlighting that the SWF has come to win confidence across the world, Sönmez stated that the fund, which has a net value of approximately $30 billion, has borrowed 1 billion euros.

"The syndicating banks are the world's largest 10 foreign banks. A consolidated audit is being carried out to ensure transparency and accountability. The 2018 consolidated account works are in progress. We will be rated by international rating agencies. We are likely to initiate a bond program in the last quarter. We have also approved our strategic plan. It is obvious what assets we will have and how much we will grow by 2028," he said.