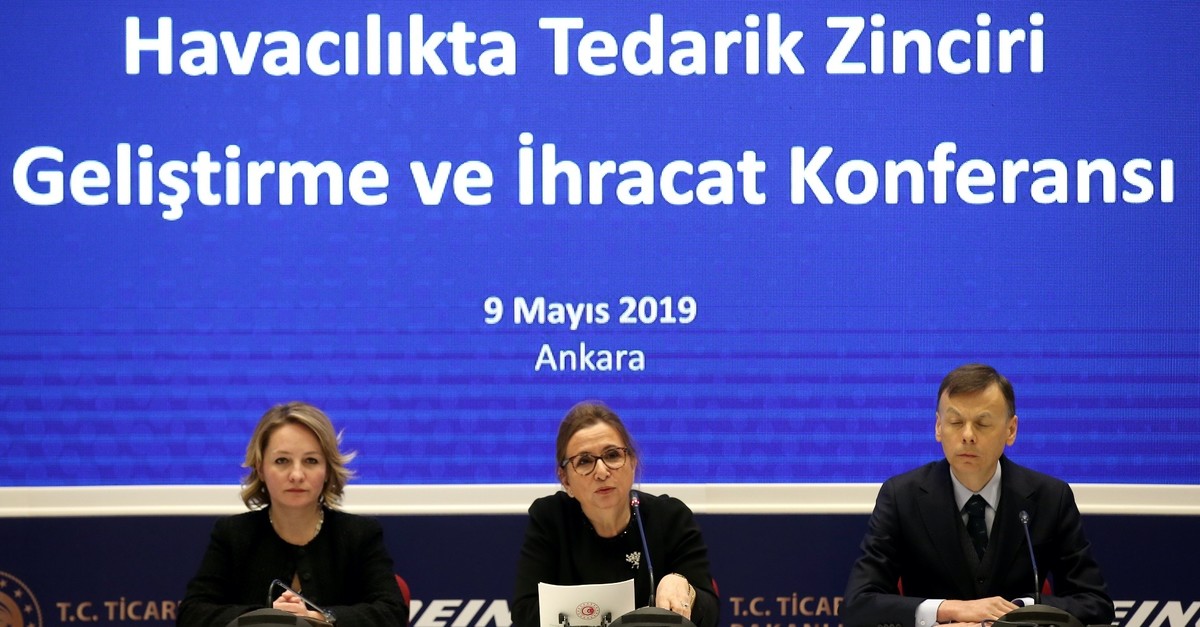 The Turkish aviation industry has recorded exponential growth in the last two decades with more local suppliers for global players in addition to increasing the number of airports and passengers. To support aviation exporters who provide parts and maintenance work for global aviation giants, the Trade Ministry launched a supply chain development and export program yesterday in cooperation with U.S. aircraft designer and manufacturer Boeing. The program primarily aims to increase the share of high-tech products in Turkish exports. Trade Minister Ruhsar Pekcan said in her address to executives of Turkish companies attending the conference that the ministry has full confidence that Turkish aviation companies could boost exports more in the export of high-tech products by taking part in global supply chains.

Trade Minister Pekcan stated that the conference was the first installment of the activities that would pave the way for the companies to take part in global supply chains in the future period, stressing that they would maintain these activities in different sectors as well.

Pekcan recalled that they formed the Global Trade Chain, a project-based support mechanism, to prepare the exporters for the future and to enhance Turkey's position in the export of goods. "Turkey has come a long way in the aviation industry. We need to improve this further," Pekcan said. "Now we need to fly in aviation with the support of global players and the ministry. We should increase our high-tech product exports, especially in the aviation sector."

Stressing that only three companies benefited from the Global Trade Chain support in the aviation sector, Pekcan said they want to increase the number of companies in this scope. He added that they sponsor 75 percent of the consultancy services in the procurement of all kinds of certificates that will enable them to become exporters in the aviation field, especially the AS9100. "If you receive your certificate, we also grant you 50 percent of the cost you incur in the scope of our support for market entry documents," she continued. "Our aim is to increase your export of high-tech products in global supply chains. When you are accepted into global supply chains, we can configure our support according to your needs in the production and supply process."

Boeing's trade with Turkey reaches $1.8B

Ayşem Sargın, the chair of the International Investors Association (YASED) and Boeing Turkey general manager, said Turkey's aviation exports made a significant contribution to the country's development and that Boeing has been doing business in Turkey for over 70 years. Last year, Boeing opened its first technology and engineering center in Turkey, Sargın recalled, explaining that Boeing obtains 65 percent of the cost of their aircraft from suppliers in 34 countries around the world.

Sargın further suggested that the aviation industry is expected to grow by 4.2 percent worldwide in 20 years and that the need for 43,000 new aircraft worth $43 trillion is also envisioned to occur in this period.

Touching on the importance of being a supplier in aviation, Sargın said that as Boeing, they buy more than 1 billion parts every year with an annual expenditure of $43 billion in the global supply chain. "Our business volume with Turkey to date has reached $1.8 billion. Our annual purchase amount totals some $200 million, which points to a very significant export potential for our country," Sargın noted. "We believe Turkey should take a bigger share from this growing sector. The world is huge with lots of suppliers. We must work hard to make our industry competitive in a challenging global environment. As Boeing, we support the Turkish aviation industry. We want to see more companies from Turkey in the Boeing supply chain," Sargın concluded.

In December 2018, Boeing opened its first Engineering and Technology Center in Turkey with a "Boeing Turkey Technology Day." The center focuses on design engineering and research to support Boeing's global technology development efforts, playing an important role in enriching Turkey's aerospace ecosystem and connecting it to the global aerospace industry.