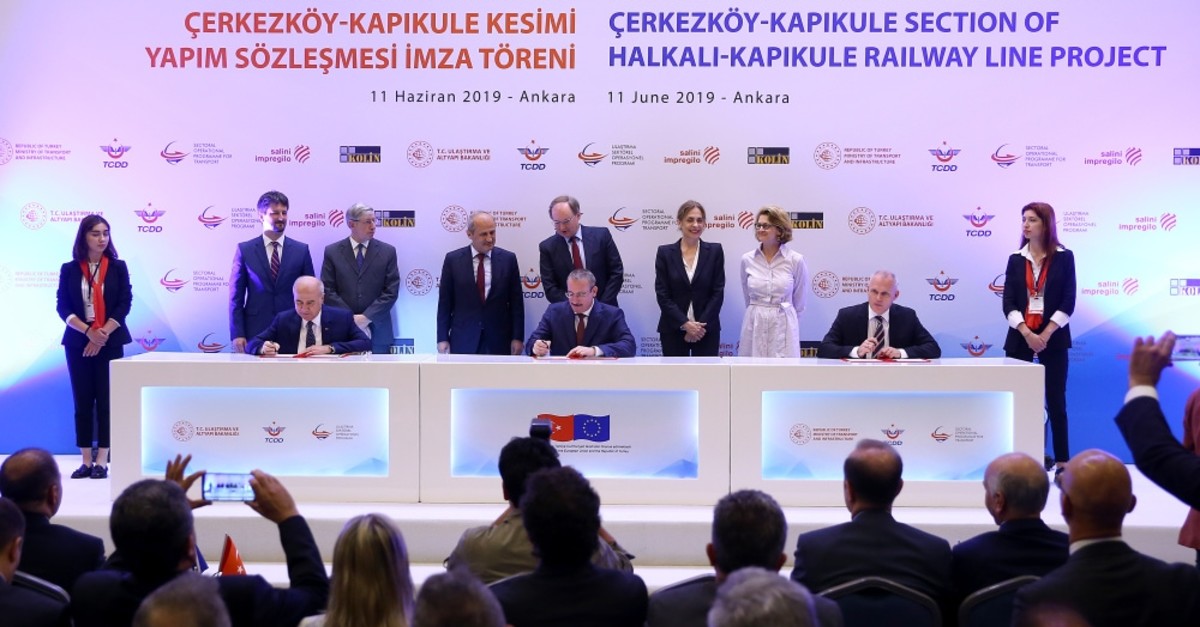 Under an agreement signed yesterday, the European Union will grant Turkey 275 million euros to fund part of a 155-kilometer railway line from Istanbul to the Bulgarian border

Turkey and the European Union yesterday inked an agreement to build a section of a major high-speed railway line between Istanbul and the border with Bulgaria. A contract on the construction of the Çerkezköy-Kapıkule section of the Halkalı-Kapıkule railway project to be financed by EU funds was signed during a ceremony in the capital of Ankara with Transport and Infrastructure Minister Cahit Turhan and the head of the delegation of the European Union to Turkey, Ambassador Christian Berger, as well as many other officials, in attendance. The project financing agreement for the Halkalı-Kapıkule high-speed train line project, the largest-ever EU-Turkey financial assistance project, was signed in February on the sidelines of the third Turkey-EU High Level Economic Dialogue.

The total project investment cost is estimated at around 1 billion euros. The EU will provide 275 million euros ($311.3 million) in grants, making it the single-largest EU investment project carried out in Turkey.

In his speech at the Halkalı-Kapıkule Railway Line Çerkezköy-Kapıkule section construction contract signing, Minister Turhan stated that the load carrying capacity of the Halkalı-Kapıkule railway line would increase significantly with the construction of the Çerkezköy-Kapıkule section, adding that upon completion of the project, which would use an EU grant of 275 million euros for the construction of this section, a high standard railway connection would be achieved with the EU countries.

The minister said they were pleased to add a new one to the major projects such as the Istanbul Airport, the Marmaray, the Yavuz Sultan Selim Bridge, the North Marmara Motorway and the Eurasia Tunnel.

Turhan noted that the government has invested approximately TL 600 billion in the last 16 years to improve transportation infrastructures, expand these networks and complete the missing connections on international transportation routes. In this process, he stressed that they were not limited to public resources and that they realized giant projects by using the build-operate-transfer (BOT) mechanism effectively.

Turhan further explained that they added EU grants to public resources just as they did in the projects of the Halkalı-Kapıkule railway line, the Ankara-Istanbul High-Speed Line Köseköy-Gebze Section, the Irmak-Karabük-Zonguldak railway line and the Samsun-Kalın railway line. "Our country is at the center of global trade routes connecting the continents. For this reason, Turkey's geostrategic position plays an essential role in the development of regional and inter-regional links," he added.

Aware of this importance, Turhan said they tried to shape the transportation policies of the country with a complementary and inclusive perspective toward the transportation corridors in the region. Minister Turhan also noted that while establishing a multimodal connection in the field of transportation in Turkey, they secured uninterrupted and high-quality infrastructures between continents with the notion of the corridor, stressing that they cared about the Iron Silk Road extending from London to Beijing and fulfilled their responsibilities from the first day.

"Again, we attach great importance to the most effective way of carrying out transportation activities on this line. I would like to remind you that the opening of the Baku-Tbilisi-Kars Railway line on Oct. 30, 2017 is a significant turning point for this giant project," he continued. "With the Çerkezköy-Kapıkule section of the Halkalı-Kapıkule Railway line to be signed, the load carrying capacity of the line will increase significantly. We will use an EU grant of 275 million euros for the construction of this section. Upon completion, we will have a high standard rail connection with European countries."

The minister pointed out that it had not been easy to implement the Halkalı-Kapıkule Railway Project in the process of Turkish-EU financial cooperation, saying the officials of both sides had 10 years of effort behind the signing of the contract.

The EU will help finance the construction of the major railway line connecting the metropolitan area of Istanbul to the Turkish-Bulgarian border through the unprecedented grants as part of the EU's investment portfolio in Turkey financed through the Instrument for Pre-Accession Assistance (IPA) funds for the period 2014-2020.

The Halkalı-Kapıkule railway line will connect the EU, Turkey and Asia in accordance with Trans-European Transport Network (TEN-T) corridors. The project is also important for its budget size and technical specifications.

The whole project consists of three sections: Halkalı-Ispartakule, Ispartakule-Çerkezköy and Çerkezköy-Kapıkule. While the construction of the 155-kilometer Çerkezköy-Kapıkule section will be jointly financed by the EU and Turkey, the construction of other 76-kilometer section will be simultaneously carried out by the Turkish State Railway (TCDD) through the national budget.

The new link will provide a safe, high-speed and clean connection for freight and passengers between the Halkalı station of Istanbul and the Bulgarian border crossing point at Kapıkule/Svelingrad station. The double-track electrified line will have a 200-kilometer-per-hour design speed, enjoying the latest state-of-the-art signaling systems compatible with EU standards.

It is estimated that once built, the railway will create major benefits for both consumers and producers of up to 1.6 billion euros. Businesses will enjoy more economical and reliable transport services, decreasing the barriers in a corridor of high importance for international import and export activities. Citizens will experience more accessibility and safer mobility, particularly in and around Istanbul's urban areas, while carbon emissions will decrease and the use of different modes of transport will be promoted, according to the EU delegation to Turkey.

Minister Turhan expressed his gratitude to Violeta Bulc, the EU commissioner for mobility and transport, for her role and contribution to the realization of the Halkalı-Kapıkule Railway line. "Because this line also has a symbolic aspect of being one of the most important distances that Turkish-EU relations have covered in transportation and financial cooperation. We will be happy to lay the foundation of the project with Bulc on July 18 in Çerkezköy," Minister Turhan said.

Turhan expressed hope that the project, which would make the integration process with the European Union more visible in every sense, will be beneficial for both sides.

Following the speeches, Erdem Direkler, the director general of EU affairs and foreign relations of the Transport and Infrastructure Ministry; Tibor Sztaricskai, the deputy head of the European Union Economic and Social Development Section; and Celal Koloğlu, a board member of Turkish contractor Kolin İnşaat signed the contract under the auspices of Minister Turhan and Ambassador Christian Berger, head of the EU Delegation to Turkey.