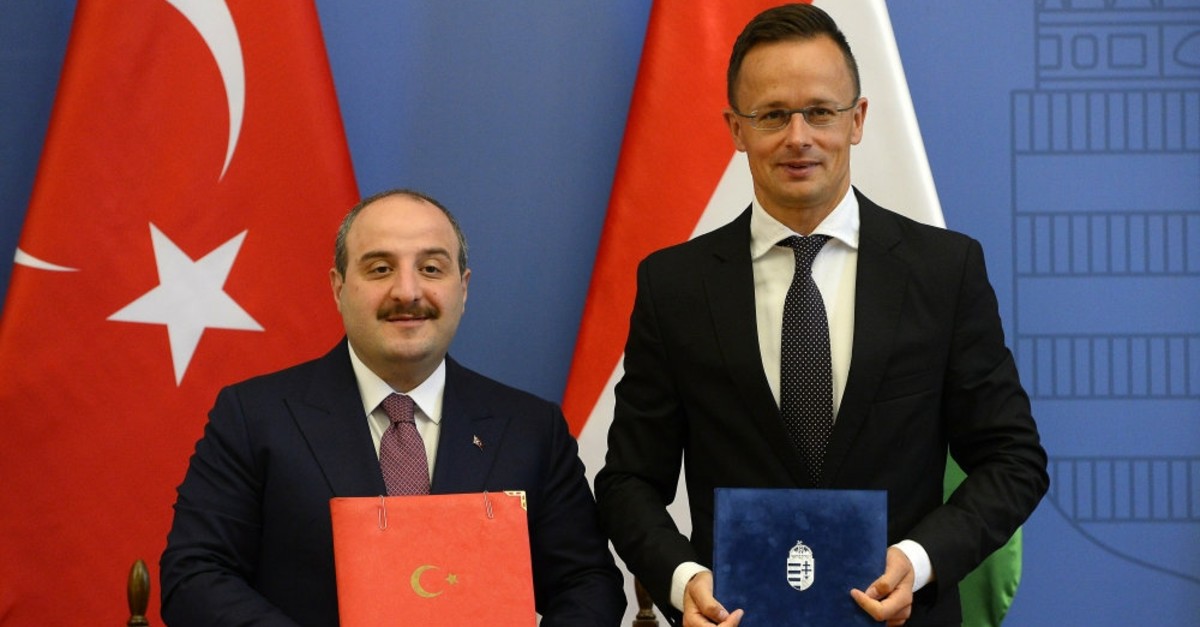 Industry and Technology Minister Mustafa Varank, left, and Hungarian Foreign Affairs and Trade Minister Peter Szijjarto pose after signing the protocol of the 6th meeting of the Hungarian-Turkish Joint Economic Committee, Budapest, June 26, 2019.
by Daily Sabah with AA Jun 27, 2019 12:19 am

Turkey and Hungary have agreed on expanding bilateral economic and commercial relations during the 6th Joint Economic Committee meeting, where Turkey sought lifting of transportation quotas for Turkish trucks

Turkey is urging Hungary to lift transportation quotas in order to boost trade and benefit consumers, Turkey's industry and technology minister said yesterday. "We maintain all our efforts to lift the transport quota," Mustafa Varank said at the Turkey-Hungary Business Council meeting in Budapest, Hungary's capital. Saying that the limits on the number of transportation permits issued act like a kind of non-tariff barrier to trade, Varank said: "Lifting the quotas will not only facilitate Turkish goods' access to EU markets but also enable European consumers to access more diverse products easier and cheaper."

Varank highlighted that in 2018 Turkish exports to Hungary rose 6.6 percent year-on-year to $1.1 billion, while imports from the country dropped 7.8 percent to $1.39 billion during the same period.

The minister noted that the bilateral trade volume only totaled $356 million in 2001 and rose to $2.5 billion in 2018 despite global volatility.

The memorandum of understanding for the 6th JEC meeting, agreed by Turkish and Hungarian officials, include concrete and constructive steps to be taken. "The JEC mechanism is strategic and beneficial to strongly sustain the growth of Turkish-Hungarian commercial and economic ties," Varank said, expressing his belief that the JEC will further enable momentum in bilateral rapport.

"Our meeting today will hopefully contribute to the High-Level Strategic Cooperation Council Meeting that will be held this year," Varank said.

The industry and technology minister also stressed that Turkey's full accession into the EU and the update of the customs union were also discussed during the meeting and expressed the importance of Hungary's support for Turkey for the acceleration of negotiations and the modernization of the customs union.

Varank also stressed that the investment of Turkish banks in Hungary was also one of the agenda items during the bilateral meetings. Hungarian Foreign Affairs and Trade Minister Peter Szijjarto, in his address at the press meeting, also confirmed that the negotiations for the Turkish banks' entry into the Hungarian market are high on the agenda of bilateral relations.

In order to boost Turkish-Hungarian trade turnover last year of more than $3.1 billion, Hungary's Eximbank has opened a $220 million credit line, Szijjarto confirmed. Turkey and Hungary also signed a deal for the mutual refund of taxes, he said and added that a new deal on freight will be signed in the autumn.

The Hungarian minister also touched upon his country's policy for African initiative and expressed that Turkish and Hungarian companies must engage in partnerships in the continent.

Szijjarto also emphasized that the two countries enjoy really strong relations and have no problems. According to the Hungarian minister, 123,000 Hungarian people visited Turkey last year.

Energy is the main pillar of Turkey-Hungary economic relations, Szijjarto told. He noted the opportunity to import gas from the south as well as deepening cooperation in the area of nuclear energy. The minister added that the Turkish Stream pipeline, soon to bring gas from Russian gas to central Europe, would enhance Hungary's energy security. The Hungarian government will open a procedure in September for booking capacity for the pipeline on the Serbian-Hungarian border, Szijjarto said.

"Hungary is considered a gateway to EU markets for Turkish businesspeople thanks to its strategic location, developed infrastructure, qualified human resources and attractive incentives system for investors," said Polat.

Turkey does nearly half of its total foreign trade with the EU, and some 75 percent of goods are transported via roads.

But Turkish-registered goods vehicles that enter the EU each year at the Hungarian, Austrian, and Bulgarian borders face administrative hurdles.

These include quota limits on the number of transport permits that can be issued to Turkish trucks by an EU member state, with demand exceeding the number of permits available.

It is estimated that liberalization of transportation could add 3.5 billion euros ($3.98 billion) to bilateral trade volumes.