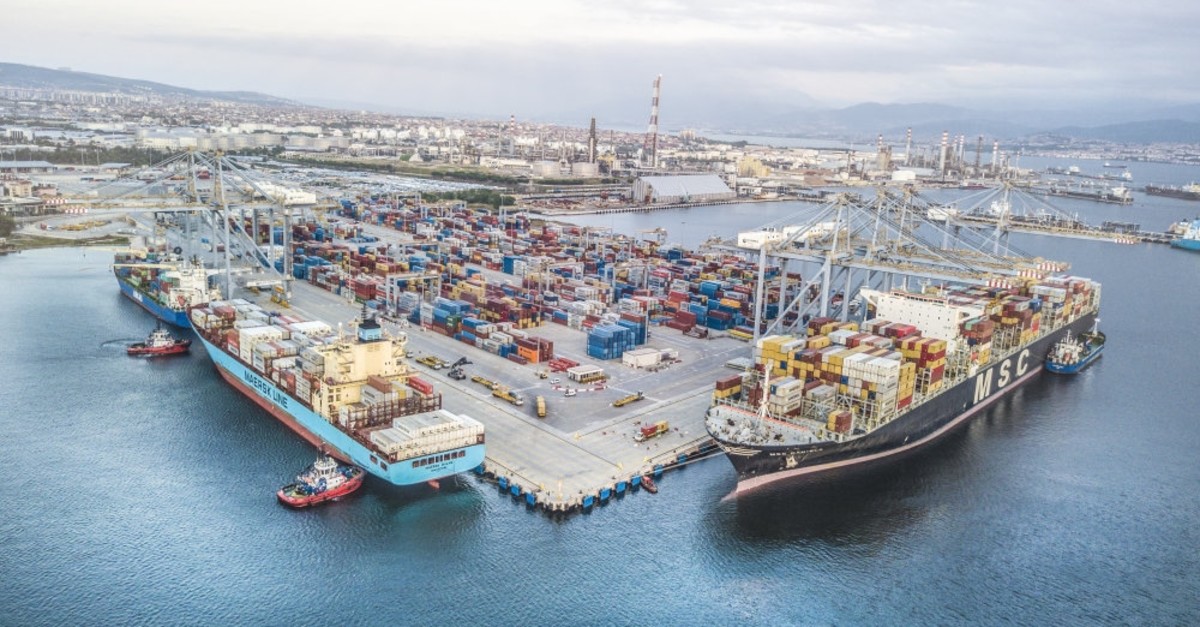 Two-thirds of Turkey's exports, $45.8 billion out of a total $72.7 billion, between January and May were transported by sea, while a major increase was also seen in exports made via railway, which surged by 60 percent in the same period

Having seen a continuous increase in exports and decrease in imports so far this year, Turkey has seen its annual trade deficit in May drop to its lowest level in 15 years. In the January-May period, Turkey's exports increased by 5 percent year-on-year, reaching $72.7 billion, while its imports dropped by 19.3 percent to $84.3 billion, according to the national statistical body. As for the means of trade, maritime transport held the lion's share in the country's total exports with $45.8 billion, covering about two-thirds of total exports. Thus, maritime transport held a share of 63 percent in total exports. On the other hand, road transport covered about 28 percent of exports, followed by air with 8 percent and railways with 0.6 percent.

According to the Turkish Statistical Institute (TurkStat), the foreign trade deficit, indicating the gap between exports and imports, stood at $31.5 billion in the last 12 months, its lowest level since August 2004. Also, the five-month exports and imports resulted in an $11.64 billion in foreign trade deficit, the lowest five-month data in the last decade.

RAILWAY EXPORTS UP BY 60 PERCENT

In the January-May period, exports by sea saw a 5 percent increase compared to the same period last year, rising from $43.7 billion to $45.8 billion. On the other hand, exports via road transport rose by 3 percent to $20.2 billion, while exports by air increased by 8.5 percent to $ 5.6 billion. Railway exports, on the other hand, surged by 60 percent in the same period, reaching $403 million.

According to import data, the share of the maritime trade was about 55.2 percent, followed by road transport at 16.2 percent, air at 13 percent, and railway at 0.7 percent.

Of the $84.3 billion achieved in imports, $46.5 billion was shouldered by maritime trade, $13.7 billion by road transport and $10.9 billion by air. While railway transport amounted to $596.5 million, other methods accounted for $12.6 billion of total imports.

In the meantime, as far as country groups are concerned in the country's overall exports, Turkey's exports to the EU – making up nearly half of the country's exports amounted to $35.7 billion from January to May, while imports were $28.4 billion, resulting in a $7.3 billion in foreign trade deficit with EU countries.

In said period, Germany, Italy and the U.K. took the lead in the country's exports. Turkey's exports to Germany were recorded as $6.6 billion, followed by the U.K. with $4.3 billion and Italy with $4 billion.

On the other hand, Turkey's exports to Asian and African countries, the next-largest export markets for Turkish products, increased by 10 percent and 20 percent to $18.8 billion and $6.8 billion, respectively.

Exports to near and Middle East countries saw a 12 percent increase, totaling $13.7 billion.

Turkey's exports to Central American and Caribbean countries in the January-May period increased by 20.1 percent compared to the same period last year, amounting to $708.4 million. Exports to North and South American countries also peaked in this process.