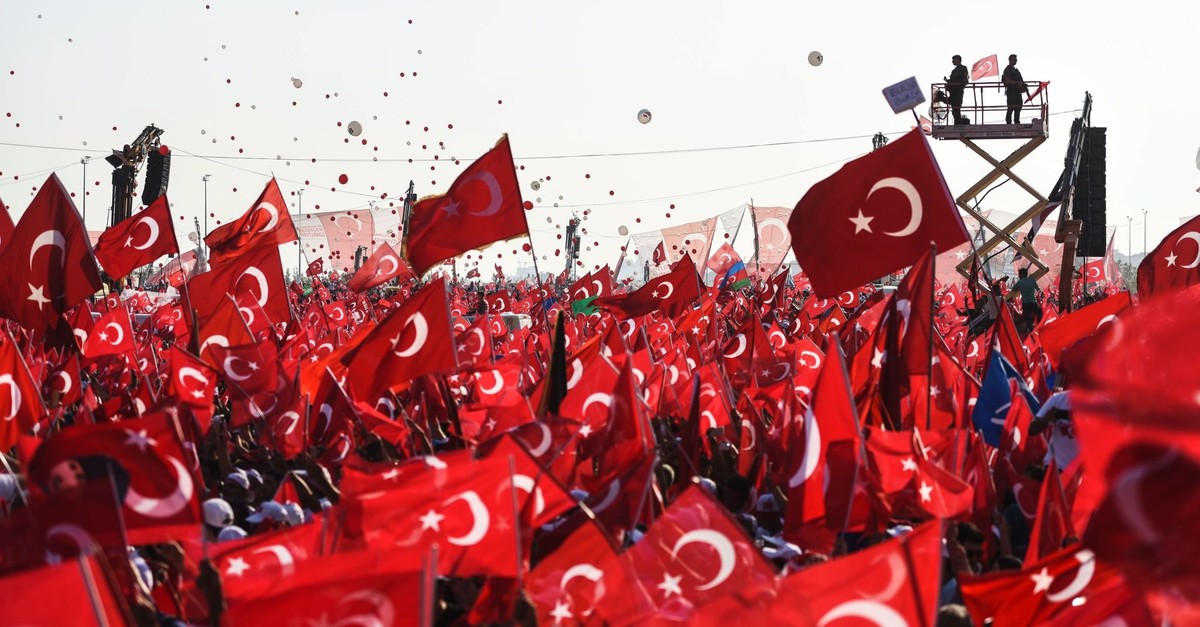 Turkish people wave Turkish national flags as they stand in front of giant screens and Turkish special force police officers standing guard in Istanbul during a rally against the July 15, 2016 failed coup attempt, Aug. 7, 2016.
by Daily Sabah Jul 15, 2019 12:07 am

With their unyielding spirit, heroic Turkish people demonstrated a strong commitment to democracy with their stance against July 15 coup attempt, which failed in its aim to destabilize the Turkish social and economic order

It has been three years since the defeated coup of July 15, 2016 – the heinous and the deadliest terrorist attack the country has ever experienced – was orchestrated by the Gülenist Terror Group (FETÖ).

Turkey successfully thwarted the atrocious attacks that targeted the country's economy and threatened an economic collapse, acting in unity and solidarity in a demonstration of its commitment to democratic constitutional order and the rule of law.Embracing its economic and social wounds, the state, its people, political leaders and the business world, effectively repelled the negative impacts of the coup attempt.

In their statements in honor of the three-year anniversary of the coup attempt, representatives of the business world emphasized that the Turkish nation demonstrated a strong commitment to democratic order on the night of July 15, dubbed an epic resurrection of the unyielding spirit of the Turkish nation.

In the failed coup, 251 citizens were killed and more than 2,200 people were injured.

Experts noted that the economic impact of the July 15 treacherous coup attempt was dampened in a short time and that the attempt "failed to stop the wheels of the Turkish industry."

İsmail Gülle, the chairman of Turkish Exporters Assembly (TİM) said Turkey continues with its rightful struggle for democracy in total unity with its citizens, the business world, politicians and the military.

Underlining that the heroic Turkish nation, with the undisputed power of national will, came face to face with tanks, airplanes and bullets, Gülle said the people composed an epic in that is unprecedented in world politics and in the struggle for democracy.

Gülle told Anadolu Agency (AA) that the exporters knew precisely that the treacherous attempt directly targeted the developing and growing Turkey, which is now making great strides in exports, as a country not only using technology but also producing, modernizing and exporting, especially in defense and aviation.

"Fortunately, our economy administration managed to eliminate these negativities in a short time with some resolute decisions. There was no serious disruption in our finance and production," Bançıvan said. "Meanwhile, as all nongovernmental organizations (NGOs) that make up the business world, we created a unity of strength against the external perception efforts directed toward our economy immediately after the coup. In addition to this common stance, as the Istanbul Chamber of Industry, we did whatever we could to ensure that our economy was not affected by this process and that the efforts of false perception did not yield results," he added.

He said they represented Turkey and its economy to the whole world in the most accurate way and brought together the managers and members of the government and international investment companies at the "Trust in Turkey, Produce in Turkey" meeting.

"Today, I would like to point out that our country has an integrated economy with the world. Our industrial sector continues to serve as the strongest pillar of our economy by looking at the future with hope," he added.

Independent Industrialists and Businessmen's Association (MÜSİAD) Chairman Abdurrahman Kaan said the coup attempt is a black mark on the history of the Turkish Republic but the Turkish nation gave the world a lesson in democracy. He added that the economic struggle with FETÖ should be seen as an opportunity to discover and fight against the weaknesses of the economy and produce long-term solutions in this direction. Kaan pointed out that the process after July 15th was vital to show economic leakage.

"Unless capital accumulation is sufficient, the sustainability of economic policies is in danger. A healthy financial sector and a deep capital market are only possible by expanding the capital stock in favor of the country. For this purpose, the creation of national capital stock and the localization of investments is a view that we have advocated for a long time as MÜSİAD," Kaan said.

"Just as land reform accelerated the industrial revolution, the world employs the theory that capital reform creates national wealth and increases prosperity. For example, it is possible to restructure companies run by trustees as national elements and to transfer them to the system as partnerships," he added.

Suggesting that the real economic parameters could not be operated by the shallow capital market, Kaan said for this, alternative funding models should be developed and injected into the system as more manageable structures by fragmenting according to the sectoral efficiency of the companies managed by trustees.

"These companies, which are ready-made structures for the industrialists who want to grow, must be quickly brought to the private sector with foreign or domestic partnerships," he noted. "The localization of foreign investment can thus be restructured. However, in these transactions, questions such as partnership structures, the origin of the foreign partner, and the reason for coming here should be handled with the seriousness of a security issue."

Istanbul Chamber of Commerce (İTO) Chairman Şekib Avdagiç said the public responded very harshly to the betrayal and won a resounding victory over the coup plotters.

"July 15 Democracy and National Unity Day are one of the commendation medals of the Turkish nation. July 15 is the symbol of our independence, such as the Medal of Independence given to martyrs and veterans in the War of Independence against the imperialist forces that occupied the country," he told Anadolu Agency (AA).

"Because on the night of July 15, 2016, the Turkish nation took the streets and squares and repelled the FETÖ member coup plotters acting in league with the foreign powers, protected their national will and future," he said. He pledged that the Istanbul business world would never forget July 15.

"The moment we forget July 15 will be the moment when the souls of our 251 martyrs ache, and their blood remains on the ground. As the president of the İTO, I promise to the Turkish nation on behalf of our 420,000 members that we will never forget the July 15 victory and the treacherous FETÖ coup plotte​rs, who fired on the people that night."

Nail Olpak, chairman of the Foreign Economic Relations Board (DEİK), said the treacherous coup attempt was defeated by the heroes of democracy who once again defended their national will. Olpak said Turkey has always come out stronger through difficult times, with common sense and determination. He pointed out that Turkey, one of the leading economies in the world, was open to external factors due to its strategic importance in the global dimension and its status as one of the centers of attraction.

He further noted that last August, a troubling process was experienced with volatility incompatible with Turkey's macroeconomic indicators in foreign currency.

"Despite this manipulative exchange rate attack, as a result of the measures put forward by our economic administration, we are trying to circumvent the process with as little damage as possible. Under the coordination of our Ministry of Trade, we have set a historic record of $168.1 billion in exports, while we have achieved a significant performance in terms of the decrease in our current account deficit along with the positive outlook in imports," he continued.

"Acting unanimously as the representatives of the business world, we have worked and continue to work to become the flag bearer of Turkey's global economic arena with the power of our state and nation," he said.

He stressed that as DEİK, they would continue to explain the struggle for democracy and to take their business to the world in this global journey by taking on Turkey's commercial diplomacy mission. Olpak added that by recognizing democracy, the rule of law, social, cultural and economic development as the indispensable elements of a great Turkey, they would continue to do their best to fulfill every task on their road map.