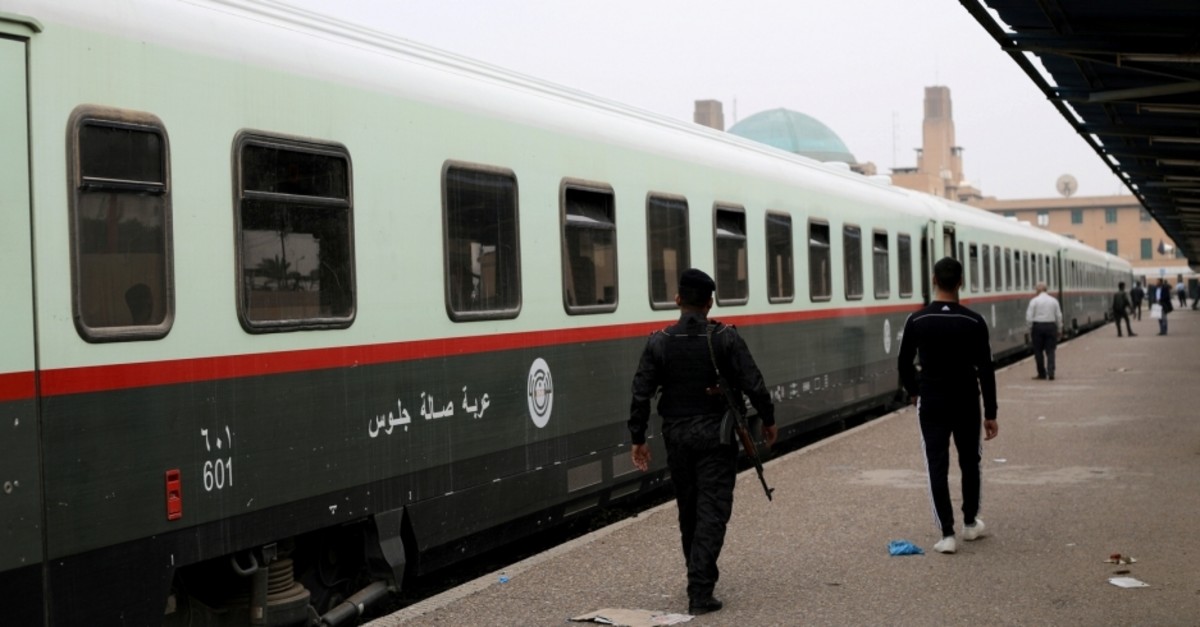 Passengers walk on a platform before boarding a train to Fallujah, the newly resurrected service to the city, at a railway station in Baghdad, Iraq Nov. 7, 2018. (Reuters Photo)
by daily sabah
Jul 30, 2019 11:46 am

Speaking on Iraqi TV, Laibi said the national railway operator has entered a recovery process following the crisis brought on by conflict across the country.

He said that a railroad line to connect to Turkey is being planned in the coming period but did not provide further details.

Laibi also noted that the distance between the capital Baghdad and southern Basra has decreased from 10 hours to seven hours, a line has been opened between central Samarra and the country's largest oil refinery in Baiji, and lines are being planned to the northern cities of Mosul and Salahaddin.

There is an existing rail connection between the two countries built as part of the Ottoman Empire's Baghdad Railway project in the early 20th century. However, an approximately 80-kilometer (50-mile) section of the line between the border town of Nusaybin in southeastern Turkey's Mardin and northwestern Iraqi border town of Rabia crosses from the northwestern tip of Syria, which has remained under control of PKK terrorist group's Syrian offshoot the Democratic Union Party (PYD) and its armed wing People's Protection Units (YPG) since 2012, when Assad regime forces withdrew from the region and gave control the terrorist group to fight elsewhere in the country's eight-year-long civil war. To bypass the Syrian territory, at least 120 kilometers (74 miles) of new tracks need to be laid in the Turkish territory to the border town of Silopi and an additional 50 kilometers inside the Iraqi territory.

This railway line also forms the Turkish-Syrian border for nearly 330 kilometers between the town of Karkamış on the right bank of the Euphrates and Nusaybin. It has been closed to passenger and commercial operations since 2014, when clashes between Daesh and YPG terrorist groups intensified in the region and Turkish border areas were frequently targeted by the terrorist groups. Since then, that section of the border remains under the control of the YPG and harassment fire or cross-border attacks targeting Turkish border outposts and other infrastructure occur on a daily basis.

Another line farther to the north crossing from southeastern city of Diyarbakır ends in the Kurtalan district of southeastern Siirt province. From Kurtalan to the Iraqi border, approximately 120 to 150 kilometers of new tracks need to be laid, however, all possible routes in this option cross through a very mountainous region and need significant infrastructure to be built.

Turkey's Ambassador to Baghdad Fatih Yıldız told Daily Sabah last month that Ankara and Baghdad have been discussing connecting the two countries with a railroad as a strategic target among several high-priority infrastructure projects.

Iraq has sought loans and investments for the major efforts to rebuild the country after a four-year-long war against Daesh terror group, which occupied large swathes of western and northwestern parts of the country between 2014 and 2017. Officials in Baghdad estimate the cost of rebuilding Iraq at nearly $90 billion. The government published a list of 157 projects at the Kuwait International Conference for the Reconstruction of Iraq in February 2018, where it sought private investments.

Turkey pledged a $5 billion loan and $50 million grants-in-aid at the conference, making it the top contributor. A coordination process for allocation of the funds was launched by Turkey this February.