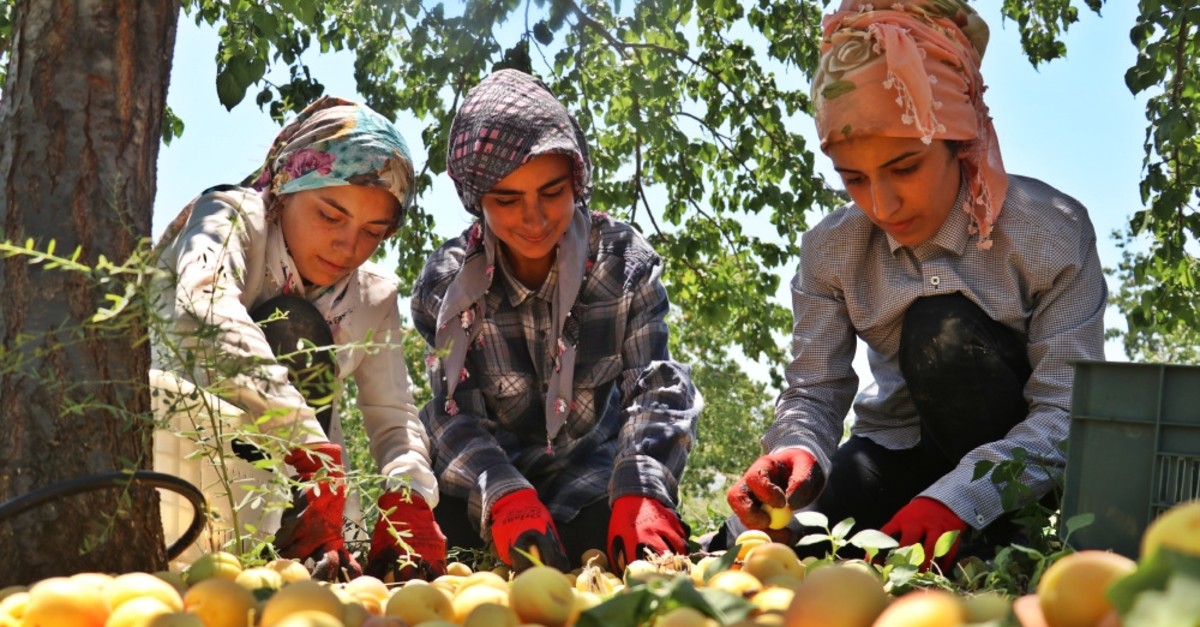 Thanks to their distinct aroma and taste, fresh apricots grown on the shores of Karakaya Dam Lake in eastern Turkey's Elazığ, one of the country's largest apricot producing regions, are seeing great demand from exporting companies.

As a result, apricot exports in the region saw a 100% increase in quantity compared to last year and reached around 24,000 tons.

Apricot varieties such as Hacıhaliloğlu, Hasanbey, Çataloğlu, and Kabaaşı that are specially grown on the shores of Karakaya Dam Lake in Baskil, a district which meets some 13% of Turkey's apricot production, are receiving more and more demand from exporters each year thanks to their distinct aroma, taste and consistency.

Exporters hire seasonal workers to gather the fresh apricots and transport them to factories in Malatya, a province in eastern Anatolia that is known as the center of the Turkish apricot industry. Sorted and packaged here according to their quality, fresh apricots are pre-cooled and then exported in refrigerated vehicles.

Elazığ Agriculture and Forestry Manager Turan Karahan said that an annual average of 60,000 tons of fresh apricot production was made from 1 million trees in an area of 100,000 decares in the district.

Karahan said that the apricots, growing in the district due to its soil structure, geographical conditions and climate, we're seeing increasing demand from exporting companies in Malatya every year. He recalled that the fresh apricot exports, which were around 12,000 tons last year, reached 24,000 tons with an increase of 100%.

He told Anadolu Agency (AA) that while apricots were exported in dried form in previous years, fresh apricots are now becoming more and more popular in exports due to their taste. He added that fresh apricots are sent directly to many countries, especially in Europe, providing significant advantages in terms of both qualities of the products subject to export and the gain of the producers.

"We will put forward new projects to make more fresh apricots available in the world," he added.

Hamit Bak, an official from an exporting company, said they had been exporting dried apricots as well as fresh apricots for 19 years through their facility in Malatya, adding that one-third of this year's 6,000 tons of exports was made up of fresh apricots.

Bak pointed out that they gave weight to Baskil's fresh apricots in exports, due to level of quality.

"Fresh apricots are mainly exported to EU countries like Germany, the U.K., and Switzerland, as well as Malaysia and Dubai. We export around 2,000 tons of fresh apricots annually, spearheaded by the apricots grown on the shores of Karakaya Dam Lake in Baskil district due to the quality," Bak continued. "I can say that Baskil is the exporter's favorite apricot. However, due to ferry transportation and the lack of coastal roads, we have difficulty in reaching the district by trucks. Besides, cold storage depots remain inadequate as demand increases. If these problems are solved, I believe fresh apricot exports in the region will increase further," he added.

Çiğdemli village headman Cumali Yüzgeç stated that they were pleased to have a fertile harvest season this year around Karakaya Dam Lake, underlining that it was more advantageous for them to sell apricots fresh because they saved them from labor costs.

Producer Mehmet Yüzgeç, on the other hand, said the apricots grown in the region were in high demand from exporters due to its sugar ratio.