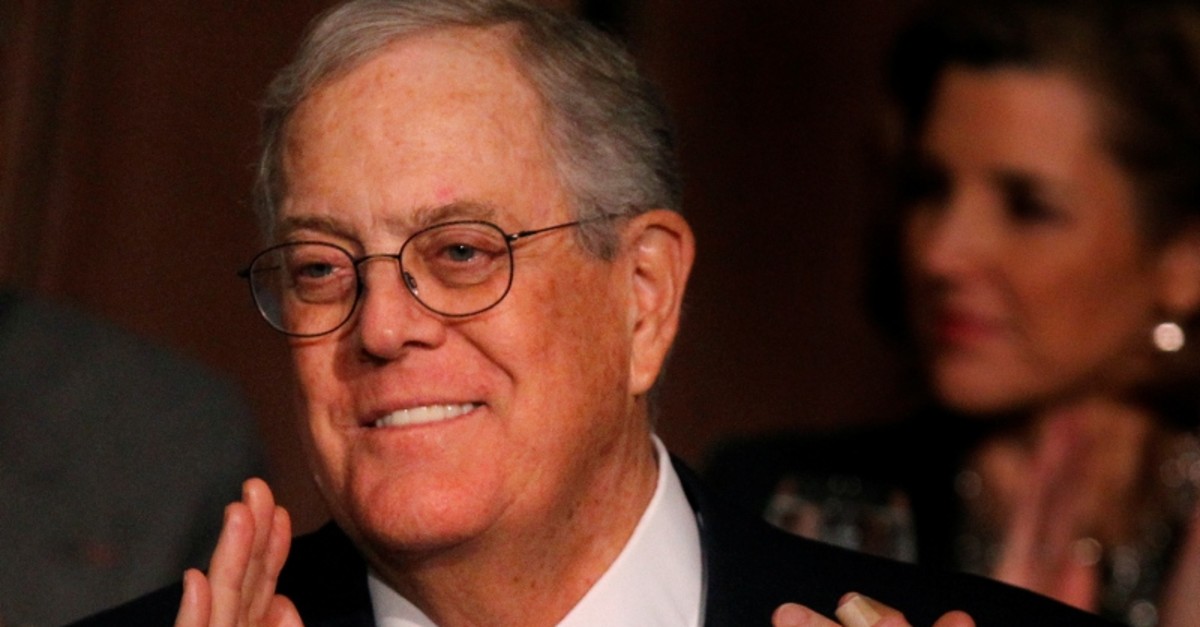 Billionaire industrialist David H. Koch, who with his older brother, Charles, transformed American politics by pouring their riches into conservative causes, has died at age 79.

Charles Koch announced the death on Friday, saying, "It is with a heavy heart that I now must inform you of David's death."

David Koch, who lived in New York City, was the Libertarian Party's vice presidential candidate in 1980. He was a generous donor to conservative political causes as well as educational, medical and cultural groups.

The Koch brothers were best known for a vast political network they built that became popularly known as the "Kochtopus" for its far-reaching tentacles in support of conservative causes. The brothers founded the anti-tax, small government group Americans for Prosperity.

"I was taught from a young age that involvement in the public discourse is a civic duty," David Koch wrote in a 2012 op-ed in the New York Post. "Each of us has a right— indeed, a responsibility, at times — to make his or her views known to the larger community in order to better form it as a whole. While we may not always get what we want, the exchange of ideas betters the nation in the process."

After battling prostate cancer for 20 years, he told a reporter following the 2012 Republican convention that he was thinking about what he will someday leave behind.

"I like to engage where my part makes a difference," he told The Weekly Standard. "I have a point of view. When I pass on, I want people to say he did a lot of good things, he made a real difference, he saved a lot of lives in cancer research."

David Koch donated $100 million in 2007 to create the David H. Koch Institute for Integrative Cancer Research at the Massachusetts Institute of Technology. He also gave millions to Johns Hopkins University in Baltimore, the Memorial Sloan-Kettering Cancer Center in New York City, the M.D. Anderson Cancer in Houston, and other institutions.

The Smithsonian's National Museum of Natural History named in his honor a wing dedicated to the story of human evolution over 6 million years. David Koch donated $15 million to fund the 15,000 square-foot hall.

"The program has the power to influence the way we view our identity as humans, not only today, but for generations to come," he said in a statement at the time.

David Koch, an engineer trained at MIT, joined Koch Industries in 1970, and served on its board. He also served as chief executive officer of Koch Chemical Technology Group, LLC, a Koch subsidiary. He retired from the company in 2018

Charles and David Koch, each with an estimated net worth of $50.5 billion, tied in fourth place in 2012 on Forbes 500 list of the nation's richest men.

Two of the Koch brothers, Frederick and Bill Koch, sued the other two, claiming in a 1998 trial that they were cheated out of more than $1 billion when they sold their stake in Koch Industries back in 1983. David and Bill Koch are twins.

The dispute stemmed from a falling out three years earlier when Bill Koch criticized Charles' management of the company, and with Frederick's support, tried to gain control of the company's board of directors. After the takeover move failed, the board fired Bill as an executive. Bill and Frederick Koch and other dissident stockholders sold their interests, and the brothers later sued claiming the company withheld crucial information that would have led to a higher sale price.

Bill and Frederick lost their case, but the lengthy public trial offered a rare behind-the-scenes glimpse at the Koch family.

The Kochs' father, Fred Koch, guessed early — before two of his boys were out of diapers and before two were even born — that wealth might split his family apart.

"It will be yours to do with what you will," the father wrote in a 1936 letter to his two oldest sons. "It may be either a blessing or a curse."

David Koch and his wife, Julia Flesher, have three children.