Syrian businesses in Turkey provide subsistence for 7% of 3.5M refugees 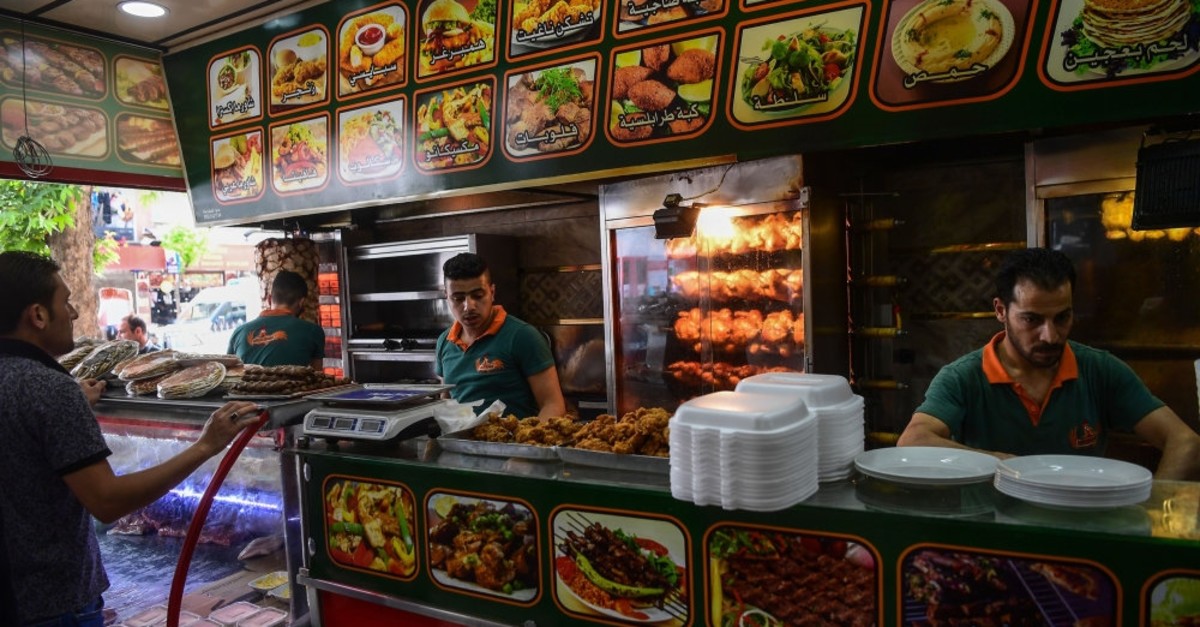 Syrian men work in a restaurant in Turkey's southeastern province of Gaziantep.
by Daily Sabah Aug 29, 2019 12:06 am

Home to more than 10,000 Syrian enterprises, Turkey has offered Syrian refugees a lucrative business environment, providing livelihood for their families and fellow Syrians, yet challenges in accessing the financial system still linger

Turkey has been home to nearly 3.6 million Syrian refugees who took shelter from the brutal war that broke out in the country eight years ago. Many of these Syrians, who became residents in Turkey and built a new life, have been participating in Turkish economic life either as employees or businesspeople. A recent study conducted by the Economic Policy Research Foundation of Turkey (TEPAV), "Syrian Entrepreneurship and Refugee Startups in Turkey: Leveraging the Turkish Experience," reveals that Turkey hosts more than 10,000 companies established by Syrians.

These enterprises employ an average of seven people, and 60% of their employees are Syrians. Based on the calculations on the average number of family members, the study has found out that approximately 250,000 Syrians benefit from employment by refugee-driven companies. The result indicates that 7% of the Syrian refugees in Turkey earn their livelihood from the Syrian-owned companies operating in the country.

TEPAV's survey, which was jointly carried out with the European Bank for Reconstruction and Development (EBRD), comparatively analyzed a sample of 416 companies, consisting of 207 Turkish firms and 209 refugee-run businesses to understand the performance of refugee businesses.

The study was conducted in eight provinces where the refugee population is most dense: Gaziantep, Mersin, Hatay, Şanlıurfa, Kilis, Adana, Kahramanmaraş and Mardin. The study demonstrated that most of the businesses run by Syrians are micro-enterprises. "The general profile of the Syrian companies indicates that 66% of them employ less than five employees and the average number of employees is 7.3. In comparison, Turkish companies in the sample were of small to medium size with 53% of the companies hiring five to 50 employees, with 26.6 employees on average," the TEPAV report said. In terms of sectoral breakdown, 71% of the Syrian companies operate in services, 14% in retail and 15% in manufacturing. In comparison, 59% of the Turkish firms surveyed in the sample are active in services, while 22% operate in retail and 19% in manufacturing.

Referring to the increase in trade with the Middle East and North Africa (MENA) region, the study maintained that the rise might be attributed to Syrian networks in the region.

The study also evaluated how Syrian entrepreneurs see the longevity of their businesses and the study points out that Syrians do not want to be considered "temporary" in Turkey.

According to the study: "72% of the Syrian entrepreneurs surveyed indicated that they do not want to return to Syria even when the war is over. One apparent reason behind this decision has been the success of their businesses in Turkey."

More than half of Syrians (59.4%) state that they have a successful business in Turkey while 71.7% of all Syrian business owners' state that they would not go back to Syria even after the war is over. Furthermore, 44.8% of Syrian owners or partners state that the Turkish business environment is better, while 23.1% stated that they are Turkish citizens now.

Although Syrian businesspeople are satisfied with their enterprises and the investment environment in Turkey as they make a positive contribution to the host economy, there are obstacles still to be surmounted. Some of these obstacles are access to finance, tax rates and business laws.

Current laws and regulations concerning the employment of Syrians negatively impact the refugee-driven companies and limit Syrians' integration to the formal labor market, the study observed. "Similarly, the analysis of the survey findings suggest that local conditions and leadership play an important role in Syrian entrepreneurs' preference of certain provinces over the others to open and run their businesses," it added.

More importantly, Syrian entrepreneurs also face challenges in access to banking and financial institutions. The TEPAV survey revealed that more than one-third (38.5%) of all Syrians said that they use the hawala system instead of using the traditional banking system. Besides for probable religious reasons, another ground for Syrian firms to choose the hawala system may be related to the obstacles in accessing the banking services in Turkey for Syrians.

Access to banking systems is still one of the biggest barriers faced by Syrian companies operating in Turkey, the report observed: "28% of Syrian employers have stated that they face problems with opening a commercial bank account while a mere 10% of the Turkish employers underlined this as a problem." According to the findings, 27.3% of Syrian firms encounter problems with domestic money transfers, 19.7% had problems with opening individual bank accounts and 15.9% had difficulties in obtaining a letter of credit for their transactions.