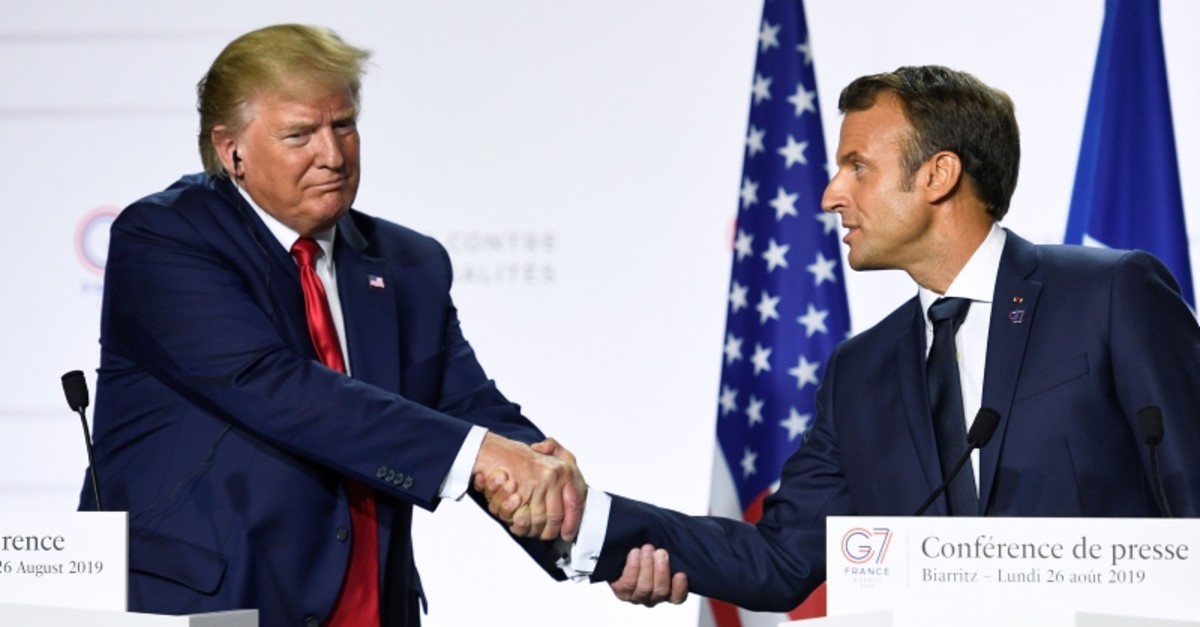 In this file photo taken on August 26, 2019 France's President Emmanuel Macron (R) and US President Donald Trump shake hands as they deliver a joint press conference in Biarritz, south-west France on the third day of annual G7 Summit (AFP Photo)
by Sep 03, 2019 3:14 pm

France has proposed offering Iran credit lines worth about $15 billion until the end of the year in return for Tehran coming fully back into compliance with its 2015 nuclear deal, an offer that hinges on Washington not blocking it, Western and Iranian sources said.

European leaders have struggled to calm confrontation between Tehran and Washington since U.S. President Donald Trump quit the deal, which guarantees Iran access to world trade in return for curbs to its nuclear program.

The United States reimposed sanctions on Iran last year and tightened them sharply this year. Iran has responded by breaching some of the limits on nuclear material in the deal and has set a deadline for this week to take further steps.

Macron has spent the summer trying to create conditions that would bring the sides back to the negotiating table.

An Iranian delegation was in Paris on Monday, including oil and finance officials, to fine-tune details of credit lines that would give Iran some respite from sanctions that have crippled its economy and cut off its oil exports.

"The question is to know whether we can reach this $15 billion) level, secondly who will finance it, and thirdly we need to get at the very least the tacit approval of the United States. We still don't know what the U.S. position is," said a source aware of the negotiations.

A senior Iranian official familiar with the negotiations said: "France has offered the credit line of $15 billion but we are still discussing it. It should be guaranteed that we will have access to this amount freely and also Iran should be able to sell its oil and have access to its money."

"President Macron is trying hard to resolve the issue and help to save the deal ... and we have overcome some issues and gaps narrowed but still there are remaining issues," the Iranian official added.

A second Iranian official said: "Although the EU and particularly France have goodwill, they should convince the U.S. to cooperate with them...If not, Iran is very serious about decreasing its nuclear commitments. There is no logic to respect the (2015) deal if it has no benefits for us."

French Finance Minister Bruno Le Maire will be in Washington on Tuesday in part to discuss the mechanism. One diplomat said that might be when the United States gives its response to French proposals.

At a G7 meeting in France last month, Trump appeared open to the idea of credit lines, although U.S. officials have since ruled out lifting sanctions.

Iran says it aims to keep the nuclear deal alive but cannot abide by it indefinitely unless the European countries that signed it ensure it receives the promised economic benefits.

Tehran has called on the Europeans to accelerate their efforts to alleviate the impact of U.S. sanctions. President Hassan Rouhani stressed on Tuesday that Iran would take its next step in scaling back its nuclear commitments by Thursday unless the Europeans keep their promises to salvage the deal.

The first source said talks, for now, did not go into how the credit lines would be repaid, although it would require Iranian oil exports to resume eventually. Certain countries were discussing with France possible involvement in such a mechanism.

"Importing the oil at some point is essential, but we need to have the agreement of the Americans. We are trying to persuade them (the Iranians) not to do more (reductions in commitment to the nuclear deal), but it's not the end of the story for the mechanism if they do," the source said, adding that for now Iranian measures were not irreversible.

Iran has asked for $3 billion a month to extend the proposals beyond the end of this year, the source said.

Washington says the nuclear deal is not good enough because many of its terms expire after a decade and it does not cover non-nuclear issues such as Iran's missile program and its regional policies.

French President Emmanuel Macron has said that as a condition of any credits, Iran must return fully to the terms of the nuclear deal and open negotiation on those other issues. French officials declined to comment on the details of the plan.

"It's extremely sensitive and we don't want the opponents of this idea to make it fail. It's extremely volatile," said a French diplomatic source.