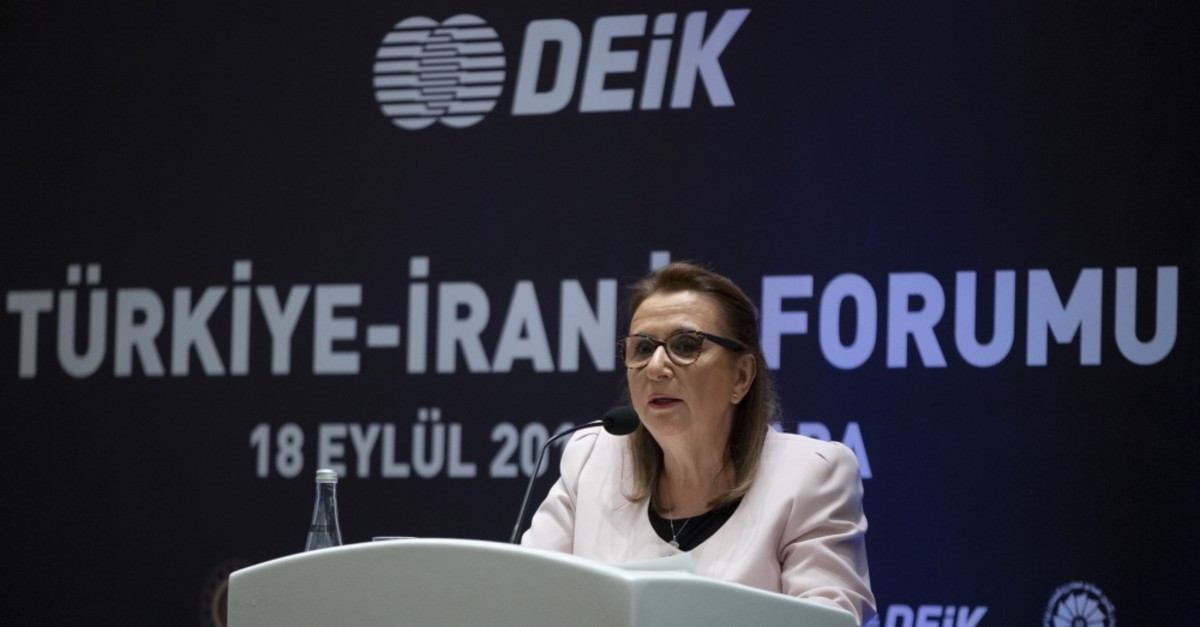 Turkey and Iran are determined to re-accelerate their trade and investments, advising the business world to benefit from bilateral agreements

Turkey and Iran are committed to boosting their efforts for further development of trade and mutual investments, according to officials.

Trade Minister Ruhsar Pekcan said yesterday relations with Iran have taken a constructive path that will smooth the way for the business world, adding that they are determined to re-accelerate trade volume by using the Preferential Trade Agreement more effectively.

Pekcan's remarks came during the Turkey-Iran Business Forum held in the capital Ankara.

She noted that the 27th Turkey-Iran Joint Economic Commission (JEC) meeting, which was co-chaired by Chief of Staff of Iran's Presidential Office Mahmoud Vaezi and Turkey's Energy and Natural Resources Minister Fatih Dönmez, would have very productive outcomes.

Indicating that they made efforts to reach the $30 billion in trade volume set by both countries' presidents, Pekcan advised the business world to take advantage of bilateral agreements and the Preferential Trade Agreement.

According to the minister, under the Preferential Trade Agreement, a total of 68 out of Turkey's 125 export products were banned and three of them were implemented tariff quota protection measures. "I have talked to Mr. Vaezi. I hope that the trade of the products from Turkey, covered by the Preferential Trade Agreement, will be opened as soon as possible. If there are products that they can procure from Turkey, Turkey will be the priority," Pekcan added.

TURKEY MOST AFFECTED BY SANCTIONS

Noting that the trade volume between the parties decreased by 13% in 2018 compared to the previous year, she said that it also declined by 30% in 2019.

Pekcan emphasized that they are determined to re-accelerate the trade volume by using the Preferential Trade Agreement more effectively, adding that Turkey, after Iran, is the country most affected by the sanctions that the U.S. re-imposed on Iran since Nov. 5, 2018.

Pekcan expressed that will always continue to be on the side of the Iranian people, saying they will continue bilateral trade with the same effort.

Highlighting that there are 166 Turkish-capitalized companies operating in Iran, Pekcan stated that investments by these companies in Iran amount to $1.3 billion.

She iterated that Turkish companies have continued their activities against all odds during the sanctions period, adding that the investments by these firms in Iran should be facilitated further.

For his part, Chief of Staff of Iran's Presidential Office Vaezi remarked that, in addition to the tripartite meeting between the leaders of Turkey, Russia and Iran held on Monday in Ankara, Turkish and Iranian presidents held a fruitful and sincere meeting.

"I would like to thank the Republic of Turkey and its esteemed president. They have condemned the sanctions imposed by the U.S. on Iran on all occasions. They have always supported Iran in nuclear and other areas. On the other hand, some Turkish banks and businessmen have some reservation about this, but we never want any Turkish businessmen to suffer and be pressured. What is important for us in this joint commission is to prevent the decline of trade relations between the two countries."

Stressing that Iran and Turkey are two Muslim neighboring countries, Vaezi continued, "Turkey and Iran can play an important role in the political and economic relations between the Islamic countries and the region. They can form the core of regional cooperation. We are undergoing a turning point, particularly in the economy. We are trying to prepare the businessmen and the private sector of the two countries for a free trade agreement. When we get to this point, we will be able to move forward more easily. Certainly, both governments are striving to ease the way for the private sector and joint investments. The chambers of commerce and the joint commissions of the two countries have taken on a heavy responsibility in this area. Within the framework of the Joint Economic Commission, we are preparing what is necessary for the work of the private sector in the one-year road map."

Nail Olpak, chairman of the Foreign Economic Relations Board (DEİK), stated that there are almost no countries in the world that Turkey does not trade with, adding, "The figures between us and Iran are plausible, but not enough. I would also like to express that the obstacles facing us for more investment and trade will not be overcome with the intention and zeal of our business world alone."