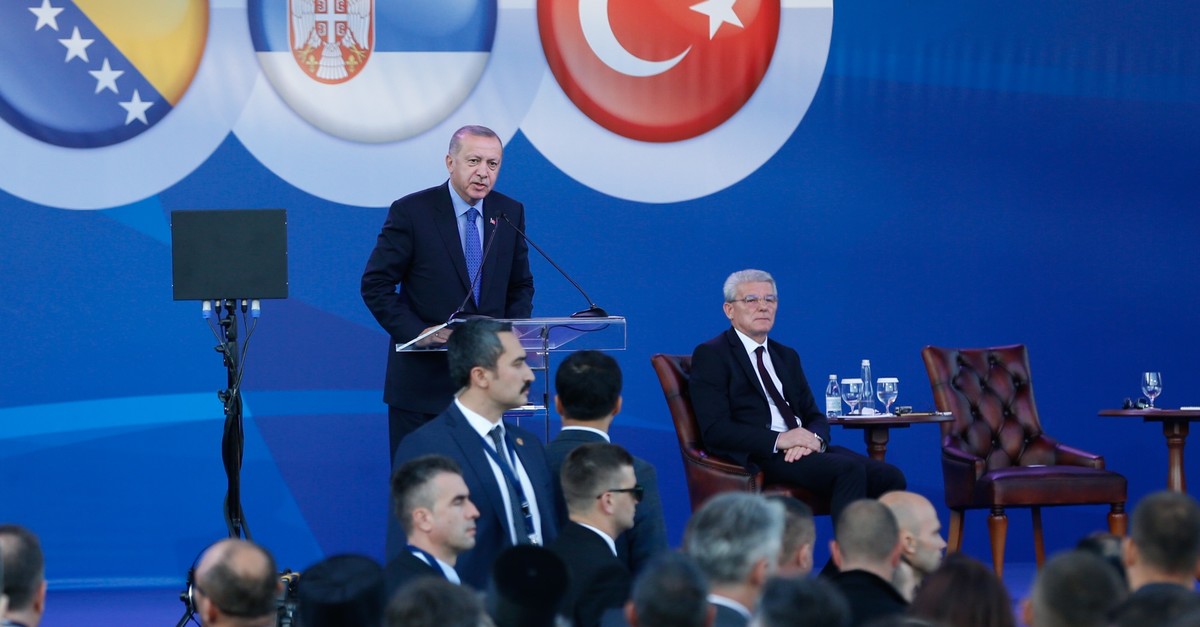 Inaugurated Tuesday, the highway project that will link the capitals of Bosnia and Serbia will pave the way for greater cooperation in the region and hopefully ensure closer ties between people

The Sarajevo-Belgrade Highway will lead to "very important" developments in the region and between Bosnia-Herzegovina and Serbia, President Recep Tayyip Erdoğan said Tuesday. "I believe that the highway will contribute to very, very important improvements and developments between Serbia, and Bosnia-Herzegovina," Erdoğan said after the Turkey, Bosnia-Herzegovina, Serbia Trilateral Summit in Belgrade. The president arrived in Serbia's capital Belgrade on Monday for a two-day official visit. On Monday, Erdoğan co-chaired the second meeting of the Serbia-Turkey High-Level Cooperation Council in Belgrade with his Serbian counterpart Aleksandar Vucic. The two presidents later in the day took part in the Turkey-Serbia Business Forum, which was attended by a large number of businessmen from both countries.

Following the trilateral summit Tuesday, Erdoğan, together with leaders of Serbia and Bosnia-Herzegovina, attended a ceremony inaugurating the highway that will link Belgrade with Bosnia's capital of Sarajevo, a project that is part of efforts to boost cooperation between the two countries, as well as in the region.

He said the highway will pave the way for productivity for the residents in the region.

"I always say that 'the road is life, the road is civilization.' The construction of this highway... will make the settlement more productive and prevent migration from these areas," Erdoğan said.

In December 2018, Turkey's Taşyapı signed a contract with the Serbian government for the design and construction of the first of two stretches of the highway.

Turkey sees the highway's role as a guarantor for peace in the region. The project was brought up more than two years ago but hit a snag with 16 different routes proposed.

However, the dispute over the routes ended following a meeting in Turkey between Erdoğan, Vucic and former Bosniak member of the Presidency of Bosnia-Herzegovina Bakir Izetbegovic.

Later in his speech, Erdoğan said the trilateral summit was "fruitful" and he announced that the next summit will be held in Bosnia in May next year, which will be followed by a summit in Turkey.

He emphasized that the trilateral mechanism would conduce to very positive developments at the point of bringing together people of Turkey, Serbia and Bosnia-Herzegovina.

For his part, Serbian President Aleksandar Vucic praised Erdoğan for playing a stabilizing role in the Balkans.

"I am grateful to Turkey and Erdoğan for the undoubted stabilizing role in the Balkans. For the first time today, we were drawing lines and roads on maps... Everyone present at the trilateral meeting was happy to look at such maps," said Vucic.

He added that the projects will not only connect infrastructure, but also people in the region.

Croatian member and the current chairman of Bosnia-Herzegovina's Presidential Council Zeljko Komsic said new ideas – such as railway infrastructure – were also discussed at the meeting. Bosniak member Sefik Dzaferovic said Turkey is a stabilizing factor in the region, adding numerous issues between Serbia and Bosnia need to be addressed bilaterally.

For his part, Serb member of Bosnia-Herzegovina's Presidential Council Milorad Dodik said the trilateral meeting discussed the highway linking Serbia and Bosnia, the TurkStream natural gas pipeline and the need for peacekeeping and stability in the region.

Dodik said it is possible that a council of ministers between the three countries will be formed.

In the meantime, the Minister of Energy and Mining of Republika Srpska Petar Djokic announced on Monday evening that a connecting branch of the TurkStream natural gas pipeline will start next year to extend from Belgrade to the Republika Srpska, one of the two entities of Bosnia-Herzegovina.

According to the news agency Tass, the Republika Srpska government has made preparations for what Djokic called a "project of great importance for his country" in May. In July, the local municipalities followed suite after a decision was agreed that the pipeline route would run parallel to a new highway to connect Belgrade and Republika Srpska.

The minister said that immediately after the completion of the Serbian section of the TurkStream, the construction of the connecting branch to the Republika Srpska would begin.